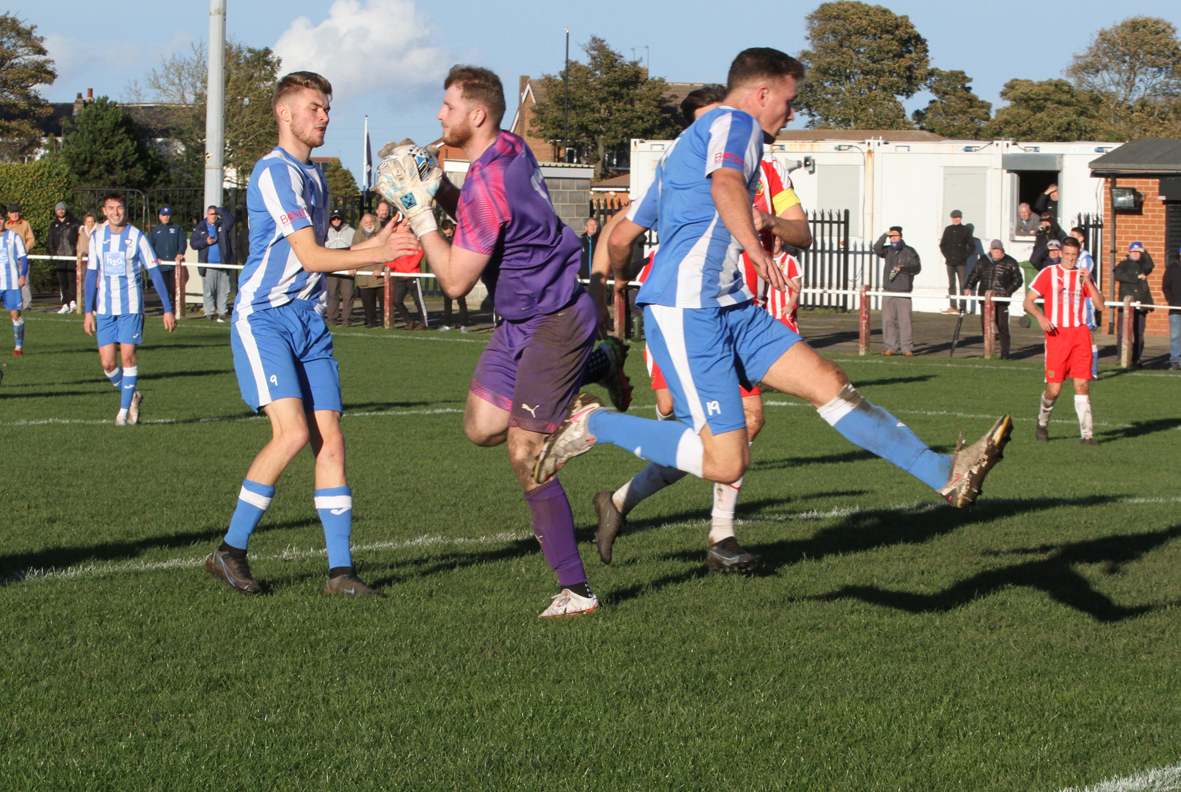 There was obvious disappointment and frustration in the Bay camp after the 3-1 defeat at Ryhope CW and manager Derek Forrest summed up his feelings. “I suppose it’s easily said but it feels like two steps forward and one step back on a day when you start well and make chances, hit the post then concede two goals and wonder why you’re in that position. We haven’t scored when we should have, we’ve conceded two from literally nothing - we’ve dwelled on the ball in one case - and so they’ve scored two goals. If you punish them early you grow in confidence and we should be confident after two wins but all of a sudden they’re 2-0 up.

“You go in at half time trying to put things right, you want a bit more belief, you want a bit more work ethic and a little bit more attitude. We got all of them in the second half and then scored one, hit the post huffed and puffed a bit, then they got the third goal, a killer goal which was because we didn’t clear our lines again. We must start clearing danger and not trying to play out from danger. It resulted in a corner and they scored from that corner. You should defend the corner better but you prevent a lot of damage in this league if you do sensible things. I think my full assessment of the day was we’ve been beaten by a team that was more mature and sensible than us.

“It’s disappointing because you end up losing 3-1 in a game where you should definitely get a point, but goals make the difference. You hit the post rather than putting it in, it’s only two inches but if they go in you’ve scored two more goals and those would have put us ahead. That’s what we’ve got to be better at, better in both boxes.”

Whitley suffered a blow after just 20 minutes when Callum Anderson picked up an injury and was unable to continue. “It was disappointing for Callum, he had such a good game in the week (at Bishop Auckland) and we kept a clean sheet, but this afternoon straightaway without Callum there seemed to be a lack of understanding - his purpose and understanding of where to be in the right areas - and Callum having to go off put us through a bit of a shaky period.”

A rash of injuries has depleted the squad in recent weeks and Whitley will welcome the ten day break that follows Tuesday’s game at Sunderland RCA, giving time for players to regain fitness.   Forrest commented “It’s just as well we’ve signed more players so we can get 16 players out for each game or it would have been a very difficult period. We need to get people back on the training pitch but first of all we need to look to Tuesday, be positive and get a good reaction.”