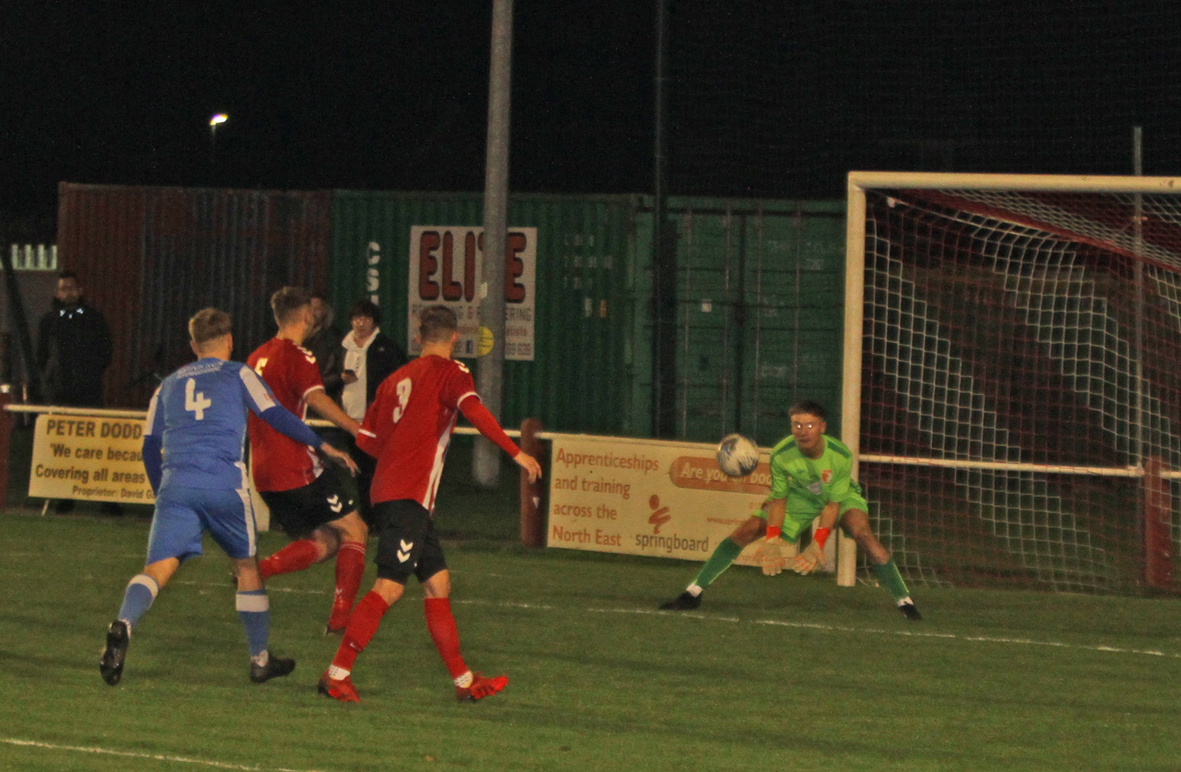 For the second time in three days, Whitley travelled to Ryhope and they were looking for a better performance than on Saturday when they were beaten at Ryhope CW. However it was not to be after a disastrous start when they conceded two goals in the opening ten minutes, ironically both scored by a former Bay player. They appeared shell shocked and rarely looked like getting back in the game. A third goal midway through the second half ended any lingering hopes of a comeback.

Playing up the slope in the first half, RCA were quickly on the attack with Dan Lister making an early save at the foot of his post. In the fourth minute, Davison seized on an uncharacteristic poor clearance by Lister, driving a low ball across the six yard box where former Bay striker Michael Annang-Colquhoun had a simple tap in to give the hosts an early lead. Trying to get his side back in the game, Jamie Dunn took the ball down the left wing and played it in for Michael Speed whose shot was off target. Moments later, a long goal kick from RCA’s on-loan keeper Harrison Bond reached Richardson who outpaced the Bay defence and his shot was only parried by Lister and once again Annang-Colquhoun was on the spot to knock the ball home to put the hosts 2-0 up with just ten minutes played.

After Dunn had seen an effort deflected wide, RCA raced back upfield and it took a fine diving save from Lister to deny Davison. The home side looked in complete control at this stage and Lister was once again in the thick of the action making a great save from apowerful shot by Watts.

Midway through the half Richard Coulson, who was providing the only real threat for Whitley, met a cross from Lewis Orrell but could not direct his header on target.

In general though, it was RCA who looked much the livelier side, controlling the game from midfield and posing a much greater threat than a Bay side lacking a cutting edge. Whitley’s best spell of the half came just before the interval, when Craig McFarlane took the ball to the by-line and cut it back for Henry Dorward who fired in a fierce shot that crashed off former Bay midfielder Matty Weirs and looped over the bar. Coulson’s cross from the left was then met by Dorward whose effort was deflected just past the post.

The second half began with RCA continuing to look the better side and a well struck shot from Watts seemed to deceive Lister as the ball rebounded off his chest and he had to dive forward to gather it just ahead of Davison. Four minutes later, Richardson’s shot from out on the left clipped the far post and flew out of play for a throw in. In the 53rd minute, Jamie Clark, who had come off the bench for Whitley at half time, brought a great save from Bond after his shot took a deflection off a defender. Parker then curled a free kick wide from just outside the box, but passes too frequently went astray or were cut out by a determined home side. Sherrard blocked a stinging effort from Hennis but RCA were not to be denied for long. They sealed victory after 65 minutes when another long goal kick was won by Davison, and the loose ball then fell for Richardson who cut in and drove his shot past Lister, although the Bay keeper did manage to get a hand on the ball.

The physically stronger and more experienced home side comfortably saw out the rest of the game, with Whitley never really threatening to reduce the arrears. It was a very disappointing evening for Whitley whose fans once again turned out in good numbers. There is now a ten day break before the next game, at home to Redcar Athletic, and it is to be hoped that this will give sufficient time for some of the injuries to heal with a nearer full strength squad available.