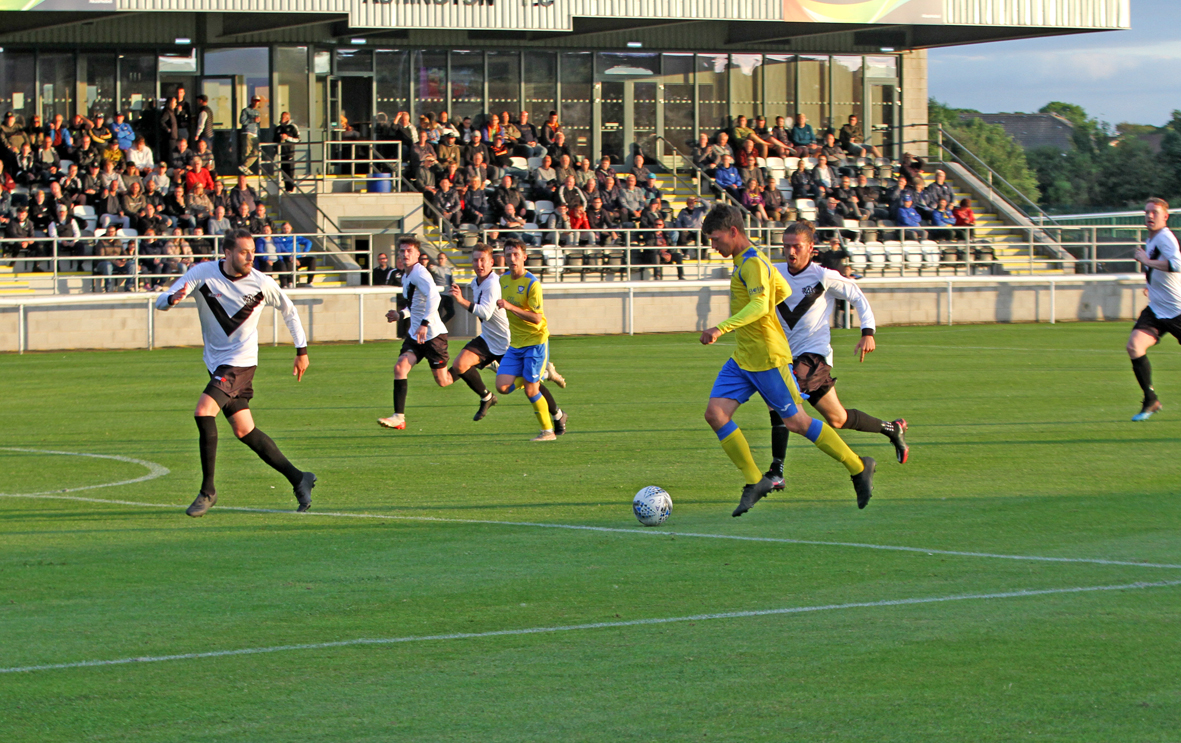 After the exciting 1-1 draw at Ashington, Whitley Bay’s management team sat in the dug out to discuss the game. Tony Fawcett felt the team were terrific in the first half “I thought we should have been out of sight by half time. We absolutely battered them, we played really well. We’ve created lots, the one that stands out for me is where the defender’s cowered away on the line and it’s hit his back and gone over keeper. Nine times out of ten that’s a goal, but no, their keeper has played well and has probably been their best player, which shows how dominant we were first half. Then just before half time there’s been a bit of a controversial booking in front of us which has set the tone for the referee a little bit. In the second half he’s been affected the Ashington crowd, and so have we a bit and we’ve played to their strengths, but credit to them, their fans were excellent, they’ve really made a good atmosphere but it’s been a bit of a difficult one to take at the end because we’ve been so good and ended up drawing, It’s felt a bit like a loss so it was a disappointment, we have created chances in the second half but we’ve not taken them.”

Derek spoke about making the most of the chances that came “It was a really good start by us, we’ve created loads of chances again scored a magnificent goal and then if we could just get the second one we might have got three before half time. Then you give yourself a lot to defend, but in the second half the game’s yo-yo’d a lot more than we’d like. They became more of a threat, they’ve changed shape but we’ve adapted to that. We’ve praised our lads for their defensive work tonight because they’ve had to defend numerous corners. Ashington have got big lads but weren’t ever really a danger so we’re praising the defending. It’s not every night you’re going to score five goals like we did last Tuesday, but if you get your second and third that’s enough. One’s never going to be enough in this league so to sum it up I’d say I was pleased in places and disappointed in others.”

Whitley’s fast and accurate passing impressed the fans and delighted the managers. Tony commented “I think the style of play suits the personnel we’ve got. We are exciting to watch, we play some good football and today’s first half was exactly that.  I’ve just had a little go at them in the changing rooms about how we’ve not done that second half, we haven’t really tried to do it. It’s been a hoof ball type of game. We could have played a bit more, it’s a bit disappointing.”

Derek acknowledged how Ashington had changed the game. “All credit to them for the way they changed things at half time. We had so much of it our way in the first half so they’ve had to do something. They’ve managed to find the intensity from the crowd and from the referee. We’ve defended magnificently at times and you just hope you’re going to nick that other goal. We’ve had chances, not as many as the first half, but you’ve just got to be clinical.”

“If I’d been sitting there in the stand as a neutral I’d have loved that game of football absolutely, but in the dugout  your heart’s fluttering when they’re attacking and you hope you’re going to nick something on the counter.“