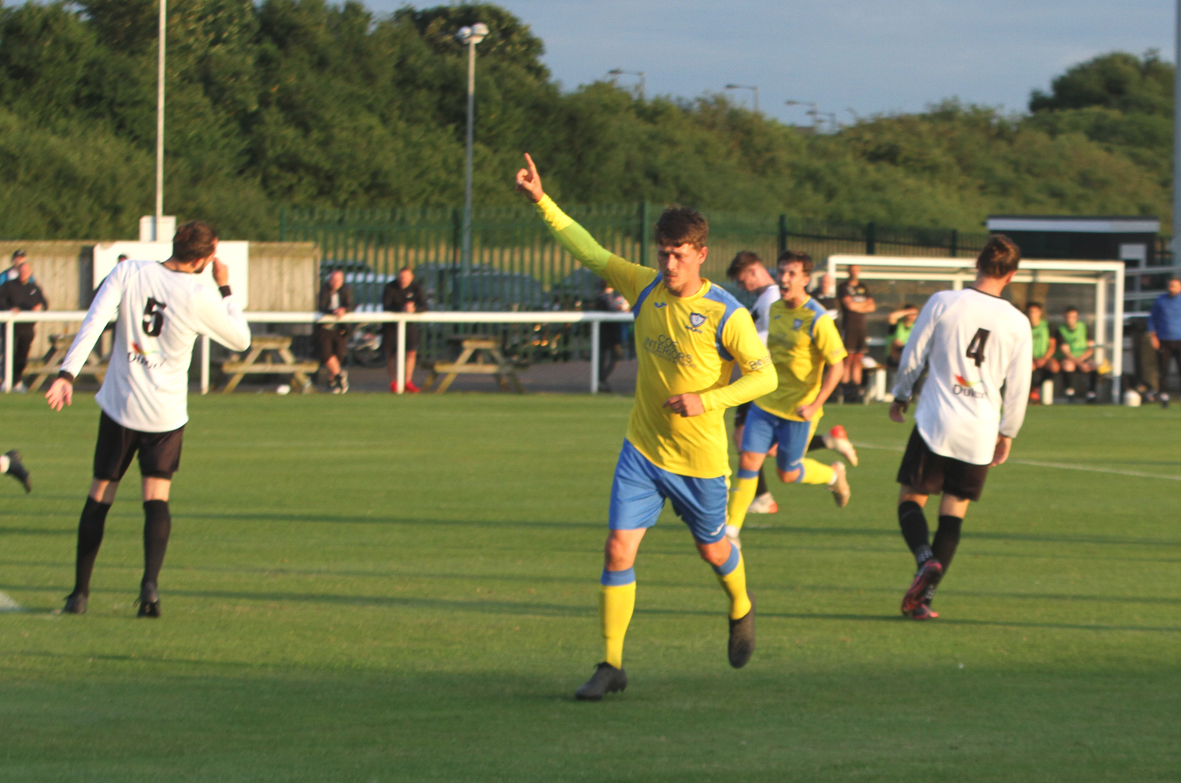 A thoroughly entertaining game ended with honours even though on their first half performance, Whitley will feel disappointed not to have come away with all three points. They were by far the better side in the opening 45 minutes but only had one goal to show for their superiority. After the interval, it was a different story as a rejuvenated Ashington side held the upper hand for lengthy periods and the final score was a fair reflection of the contest.

On a fine sunny evening the game started with the Colliers attacking right from the kick off and inside the first 30 seconds, captain Dean Briggs drilled a shot into the side netting. At the other end, a long range effort from Jamie Dunn flew wide of the target before Chris Bannon blocked an effort from Bobby Taylor.

After the opening exchanges, Whitley soon got on top playing some neat accurate passes in midfield and breaking forward with pace, which was unsettling the home defence. Matty Weirs fired over the bar after being played clear on the left then an opportunist shot from distance by Adam Shanks, who had spotted Dryden off his line, drifted wide.

Whitley’s pressure was forcing errors from the home side, and when they struggled to contain another Bay attack, Shanks broke forward on the left, racing unchallenged to the edge of the box before unleashing a superb shot that flew past Dryden high into the net to give Whitley a 21st minute lead.

Two minutes later Dunn was denied by Dryden and with Whitley pushing for a second goal, a shot from Richard Coulson took a deflection, wrong footing the keeper who was relieved to see the ball go past the post.

After a lengthy stoppage following an injury to Ashington defender Curtis Coppen, Whitley again drove forward and Dryden got down well to gather a low cross from Coulson just as Jason Chanayire was about to pounce. Moments later, Chanayire had a good opportunity to double Whitley’s lead when played through on the right but his attempted lob over the keeper was blocked.

A rare attack by Ashington ended when Ross crossed the ball across the face of goal and out of play but Whitley soon resumed their pressure on the home goal and it took a tremendous point blank save by Dryden to deny Shanks, followed by a goal line clearance to ensure that there was just one goal separating the sides at the interval.

At the start of the second half, the hosts made a double substitution and a key positional change with tall striker Ben Harmison dropping back to the centre of defence. The changes soon had the desired effect for the Colliers who looked a different team, pouring forward with much greater determination.

Whitley were still dangerous on the break and Coulson had an effort blocked, then eight minutes into the half, Shanks saw his goalbound shot pushed round the post by Dryden, who was keeping his side in the game.

After a ball flew across the Bay goalmouth, and narrowly beyond the far post, the home fans in the bumper crowd of 552 were really coming to life and in the 56th minute they finally had something to cheer when Briggs played the ball through the Whitley 18 yard box and Karl Ross, a former Bay midfielder, slotted past Bannon to draw the sides level.

Urged on by the increasingly vociferous home support, Ashington had a sustained spell of pressure including a series of corners but the disciplined Whitley defence withstood everything that was thrown at them. Several speedy breaks upfield kept the home defence on their toes and Chanayire, who has been in great goalscoring form recently, had another shot saved, while Hishi Lama tried his luck but his shot failed to trouble Dryden.

With time running out, former Bay legend Paul Robinson showed he had not lost his ability to play precise balls from midfield with a great pass into the path of Briggs but Craig McFarlane judged the intentions of his former team mate and a timely interception averted the danger.

To their credit, the two sides kept pressing for a winner but in the end they had to be content with a share of the points, with both sets of fans giving the players a rousing reception as they left the field.