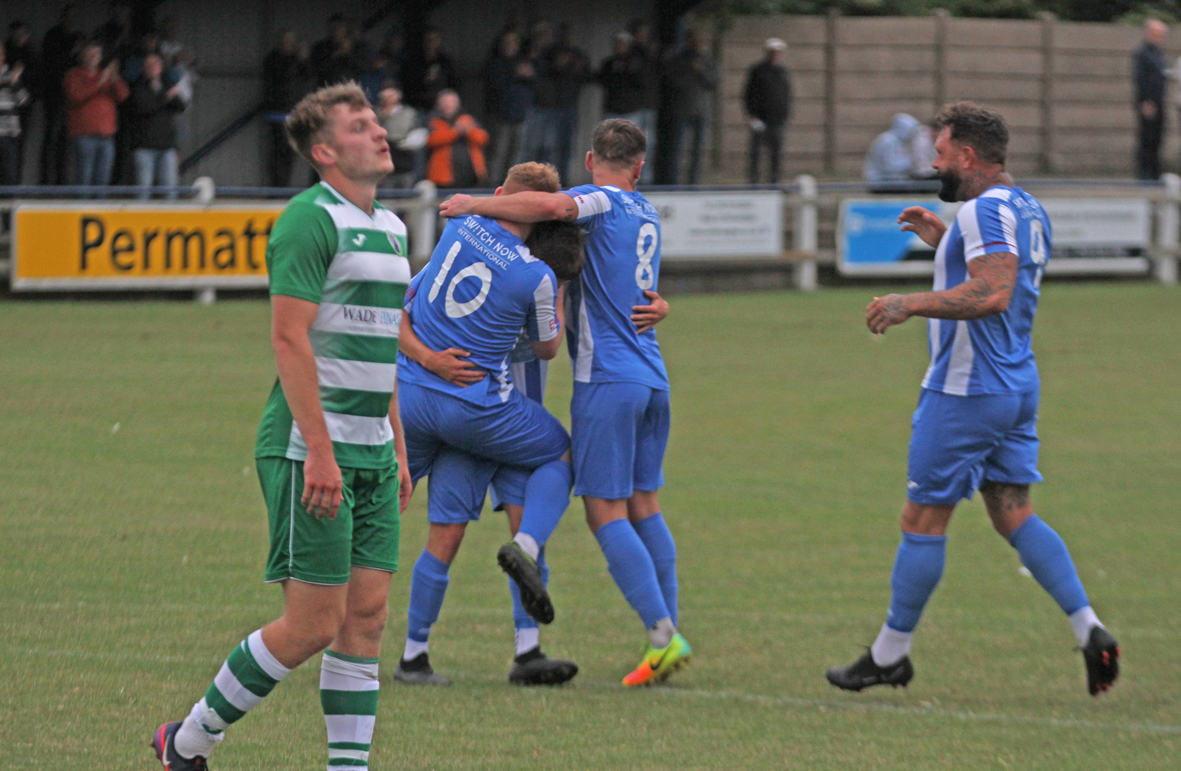 The weather may have changed dramatically but Whitley’s winning run continued as they saw off the challenge of local rivals West Allotment at Hillheads. A cool, damp and breezy evening was a sharp contrast to the hot weather of recent days and it was the visitors, who scored seven at the weekend, who failed to acclimatise, rarely posing a threat to the Bay defence.

In the only change to the side that defeated Redcar on Saturday, Sean Taylor came into the starting eleven in place of Ben Richardson who was on the bench.

Whitley started the better and they took the lead with just 12 minutes played. Luke Porritt was proving a threat on the left and when he cut in from the wing, he drew defenders towards him, leaving a gap at the heart of the Allotment defence. Playing the ball across the edge of the 18 yard box, Porritt found Ollie Cresdee completely unmarked with the goal at his mercy and the youngster calmly slotted the ball home for his first goal in Bay colours.

The visitors fought back and three minutes later Dan Lister made a good save to keep Whitley in front. It did not take long for play to return to the other end and when Porritt delivered another dangerous cross into the six yard box, the onrushing Malcolm Morien got his foot under the ball and scooped it high over the bar when it looked easier to score. Six minutes later, Cresdee tried a back heel when just two yards out but the effort was off target and the ball was cleared.

Whitley were looking in control, with Allotment unable to make a real impression on a well organised Bay defence but five minutes before the interval, Whitley suffered a blow when Stephen Turnbull went down injured and despite treatment was unable to continue and had to be helped from the field with Richardson taking his place.

With no further alarms, Whitley retained their single goal advantage at the interval.

Into the second half, they continued to create the better openings and after good approach work on the right, Morien played a great ball into the six yard box but with no Bay player on hand to apply the finishing touch.

Midway through the half, Porritt was the victim of a poor challenge by Allotment skipper Michael Scott, who was cautioned for an offence just outside the penalty area.

Minutes later Sean Taylor supplied another good ball into the goalmouth but it was put behind, not far beyond the back post.

Substitute Jackson Ward had been on the field for barely a minute when he was in the right place at the right time to poke home a cross from the ever dangerous Porritt. It was his second goal in three games and it seemed to knock the stuffing out of the visitors, whose discipline let them down in the closing stages with two further yellow cards. With 20 minutes remaining and the cushion of a second goal, Whitley were now very much in control of proceedings and had little difficulty in maintaining a clean sheet.

Ward’s stay on the pitch was unfortunately short lived as he picked up an injury but with teams now allowed to use five substitutes, Whitley were able to bring on Adam Hutchinson for the final six minutes.

Whitley’s fourth victory in five games sees them up to fifth place in the fledgling Northern League table. As manager Nick Gray was quick to point out, it is still very early in the season and there is still much to do but the signs are certainly very encouraging.