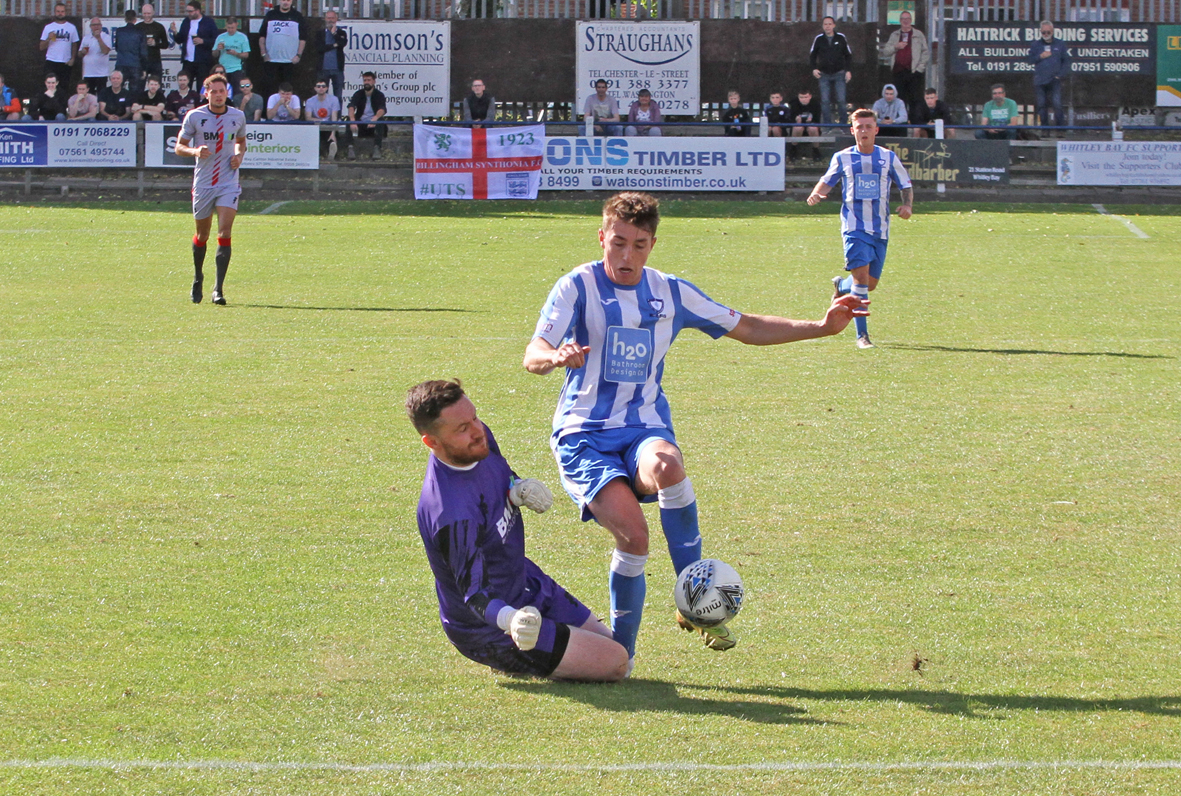 Joint manager Derek Forrest shared the disappointment of Bay fans as he reflected on the dramatic FA Vase tie when Whitley were beaten 4-3 by Billingham Synthonia. “It’s very disappointing when we’ve come out and scored a goal so early but haven’t settled at all after that goal. We’ve given away a free kick on the edge of the box and the lad’s scored with a very good free kick. I think we’ll just have to hold our hands up and say well done to him.  But from being 1-0 up all of a sudden the momentum’s swung. They’re a big, strong, powerful side who won a lot of second balls and we haven’t quite matched their hard running. We got back into it but after they scored their third goal we were chasing the game. In the second half we were beginning to stretch it but then we got stretched, made a couple of mistakes and they scored the all important fourth goal.

“It’s a game of fine margins, the soft penalty last week at Consett and then we should have had a penalty here. The lad’s pulled his shirt or pushed him over but it’s not given. If it had been, it would probably have set us up for the equaliser with still time to win it. We could see the crowd were willing us to score that goal, we hit the bottom of the post, the ball goes flashing across the box, but ultimately they’ve done that little bit more than us.

“It’s disappointing because at the end we know we should have defended better. We shouldn’t be conceding four, especially at home. But we did score three, that‘s the refreshing thing but three goals at home should be enough to win the game.

“Having players injured and unavailable has been a problem, but to be fair I’m sure other clubs have had similar problems. There are no excuses, they’ve won the first half and I think we won the second half but they’ve done that little bit more with their first half performance than we did in the second half.

We’ve got to bounce back next week against Billingham Town - it’s a game we need to win. We’ll prepare for it and we’ve got to hope that the fans come back. They were entertained today but they’ll obviously be disappointed with the result.”