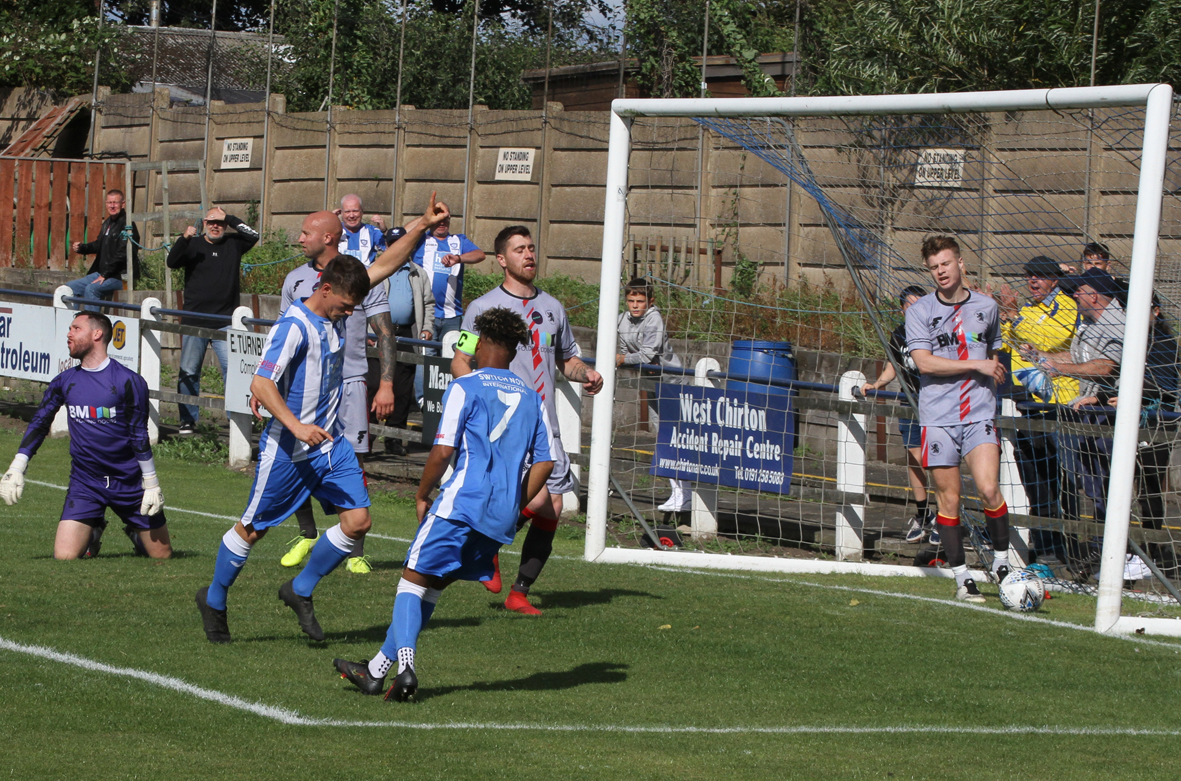 For the third consecutive year, Whitley Bay, the most successful club in FA Vase history, have gone out of the competition at the first hurdle. For any neutrals in the excellent crowd of well over 400 fans, this was a thoroughly entertaining cup tie but for the home fans it was an afternoon of huge disappointment with defensive errors proving costly as Whitley conceded four goals.

In sunny and breezy conditions, Whitley made the perfect start, opening the scoring after just 80 seconds. When Richard Coulson received the ball on the left he broke past two defenders before firing in a low shot that keeper Daniel Dixon could only push away and it fell perfectly for Adam Shanks to drill home from 12 yards.

The lead lasted little more than two minutes as Synners capitalised on a foul by Hishi Lama just outside the box. Bradley Mills floated the free kick perfectly over the defensive wall and beyond the reach of Chris Bannon, who could only watch as the ball flew into the top corner of the net. The visitors, the Northern League’s top scorers, grew in confidence and after finding space down the right, the ball was crossed to just beyond the back post where the unmarked Kurtis Howes had time to bring it under control before crashing a great shot across Bannon and high into the net to put the Teessiders ahead with only 12 minutes played.

Back came Whitley and when Shanks played the ball wide to Mitchell Ramsay, the recent signing from Seaton Delaval raced forward and drove a powerful shot between the onrushing keeper Dixon and his near post to level the score after just 19 minutes.

The action continued unabated with first Richard Coulson almost putting Whitley back in front after good work from Shanks before the visitors crashed a shot off the base of the post and behind for a goal kick. Another dangerous looking attack by Synthonia was halted by a well timed challenge from Lama but when Whitley mounted an attack after 36 minutes, Coulson, racing clear of the Billingham defence was brought down just outside the box by Dixon, a foul which earned the keeper only a caution. The resultant free kick was driven just over the bar by Shanks.

Three minutes before the interval, Synners regained the lead, bursting through the Bay defence with ease and the dangerous Howes got his second goal of the game with a shot that Luke Taylor, despite his best efforts, could not keep out.

The action was relentless and within a minute, Shanks might have restored parity but his header from Chanayire’s cross went straight into arms of the grateful keeper. Into stoppage time, Ramsay was hauled down right on the edge of the box but Whitley could not capitalise on the free kick that followed and at the break they were one goal behind.

Within seconds of the resumption, Shanks forced a save from Dixon just as the ball appeared to be heading for the far corner of the net.

Whitley were having far more of the game now, with the visitors appearing content to hold on to their narrow lead and their tall and powerful defenders were stifling the Bay attacks on the edge of the box, with the majority of the game being played in midfield.

Into the last ten minutes, Bay substitute Matty Weirs sent a shot just over the bar following good build up play which cut through the Teessiders’ defence. Then with just five minutes of normal time left, Synthonia intercepted a quickly taken Bay free kick and when the ball was played in from the right, Craig McFarlane failed to cut it out, leaving Ben Henderson to side step Bannon before slotting the ball into the net to effectively seal victory.

To their credit, Whitley responded with determination and in the 88th minute, when a right wing corner from Shanks was only half cleared, Taylor put it back into the goalmouth where another partial clearance was volleyed into the net by Matty Weirs. With seven minutes of additional time signalled, there was still time for further drama as Whitley threw everything at their opponents in an attempt to take the tie to penalties. Mitchell Ramsay was tugged to the ground as he broke into the box but despite the protestations of the Bay players and fans, referee David Fittes did not award a penalty. Seconds later, a free kick was awarded when Gaffney was brought down inches outside the box and after a melee, the ball was eventually cleared. Two minutes later, Shanks hit the bottom of the post with a shot that looked destined for the net with Dixon well beaten and then the rebound was driven narrowly wide by Coulson. A cross to the back post by Shanks just eluded Ramsay before a final corner saw keeper Chris Bannon come up in support but it was to no avail as Billingham held on to claim victory.

Whitley had left it too late to put real pressure on the visitors and paid the price for some uncharacteristically poor defending.