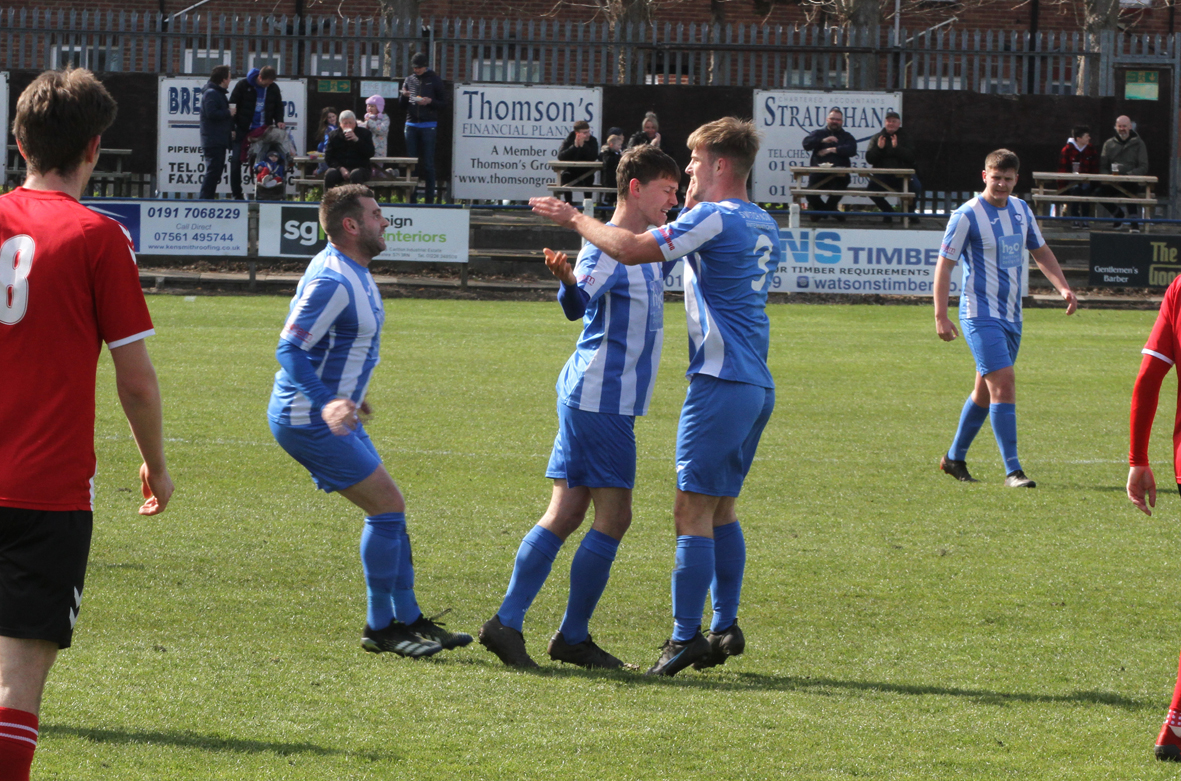 Manager Nick Gray was happy and relieved, as was everyone associated with Whitley Bay Football Club, following the 2-0 victory over Sunderland RCA which guaranteed their place in the Northern League First Division next season.

“I thought we were a little bit nervous in the first ten minutes and I thought we grew into the game and then we scored and I thought we’ve sat back a little bit.  I said at half time ‘play on the front foot, play in their half, game manage it’.  We did that but it was a relief when the second goal went in and you could see the relief on everyone, but let’s be honest Dan hasn’t had a save to make the whole game and that’s a credit not just to the defence but to the front, we defended from the front. I thought there wasn’t anyone there who didn’t deserve a pat on the back today.

“To be fair for me next season starts now. You’re always looking ahead but today’s about the win, we’re staying up and I said to the boys in there ‘enjoy you’re night because you’re in football for winning.’

“I was very critical of the pitch last week and the pitch is a lot better today and I think it has helped us, so fair play on that one. I think today was about everyone collectively doing their shift, whether it be a supporter be it a sub coming on, whether it’s a player on the pitch, a sub unused or a squad member. I’m delighted for everyone. We’ve got to enjoy tonight but we’ve also got to be realistic and look where we are. The big thing for me is lessons learned and I’ll be working to make sure this club’s never in that position again and there’s more happier days than worrying days.

“The lads put a shift in today, they worked their socks off, that’s all you can ask the players. they knew how important the game was, they took that in their stride and I’m chuffed to bits for everyone in the dressing room and especially the supporters who’ve had a tough year but trust me I’ll be making sure they don’t have days like today again.  There’s a load of work to be done here. When I came in I was asked to make sure we stayed in the league.  We’re in the league, that’s the main thing and on our own merits not relying on others, but the plan starts now. I’m a firm believer that you shouldn’t dwell on the past but learn from the past, and if we do that we’ll be fine. I’m a person who wants to win, wants to improve the players, the club, myself. It cannot really happen individually but if you do it collectively it s a lot more easy and a lot more enjoyable.

“To the fans I’d like to say thank you for supporting us all season, you’ve kept on supporting us. This club has been getting 300-400 watching some disappointing football, now trust us. I want to come and enjoy it, the players do, the staff do, the committee do everyone does.  The fans have been fantastic. I want to have Friday night games, games where they’re looking forward to it.  Today’s about getting over the line which we have done, but the hard work starts now.”