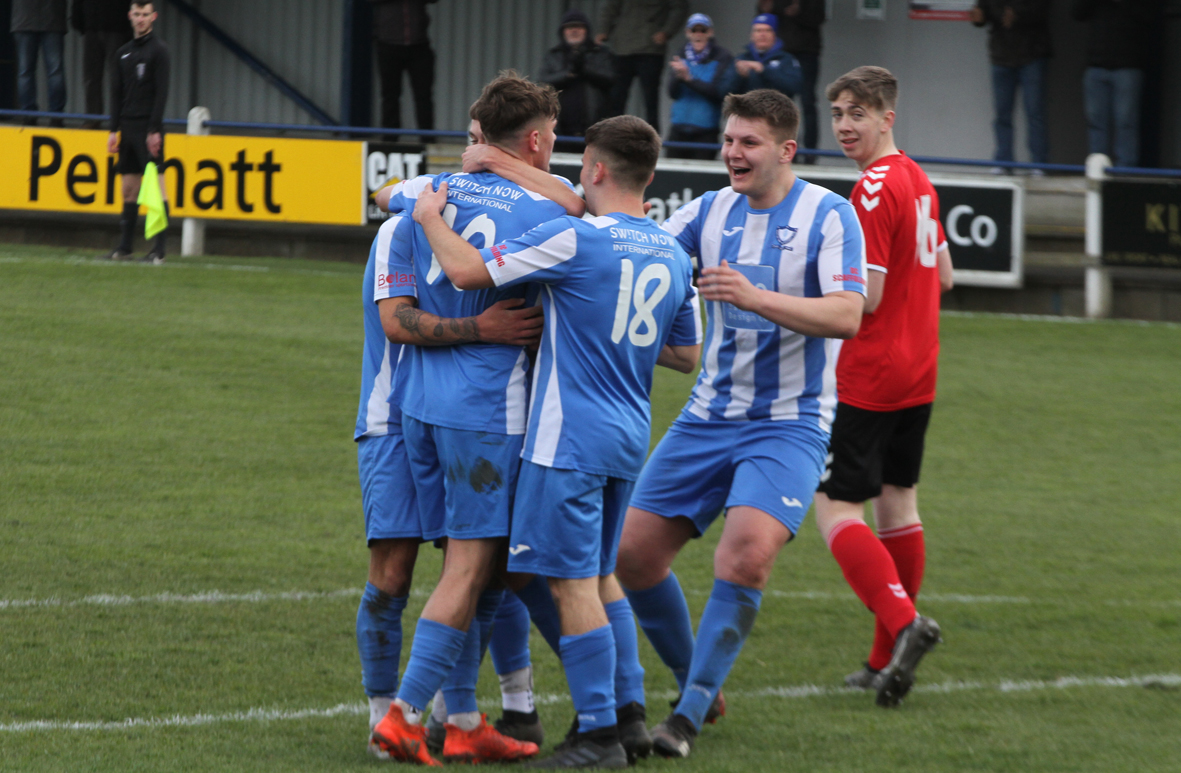 Whitley guaranteed their First Division status for next season with a well deserved victory over Sunderland RCA on a sunny afternoon at Hillheads. Poor recent results together with an upturn in the fortunes of the sides below them had made this a ‘must win’ game and the players rose to the challenge admirably giving 100% effort, much to the delight of the fans who gave them a rapturous reception at the final whistle.

The pitch had come in for criticism in recent games but favourable weather and top rate preparation work from the ground staff resulted in an excellent playing surface for this late stage of the season.

There were signs of nerves in the early stages but the tension was eased in the 13th minute when Adam Shanks broke the deadlock, firing a shot into the bottom corner of the net from 20 yards. Given the context of the game, this was one of the most important of the 81 goals he has now scored for the club and showed just why he is a fans’ favourite.

Three minutes later he might have earned Whitley a second goal when he appeared to be bundled to the ground just inside the box. Despite vociferous appeals for a penalty, referee Craig Dean allowed play to continue with the visitors relieved to clear their lines.

Recent signing Kyle Errington went close just before the half hour, meeting a cross from the right as he burst forward on the left but his shot flew wide of the back post.

The Ryhope based side were making little impression and it took until the 39th minute for them to register a meaningful shot but the attempt failed to trouble Dan Lister in the Bay goal. Play swiftly reverted to the other end with Shanks drilling in a shot which Marrs saved comfortably. Whitley remained the dominant side in the remaining minutes of the half and were well worth their interval lead.

The second half got underway with the visitors defence put under pressure. Whitley penned them inside their 18 yard box but a packed rearguard prevented a shot on target with Richardson eventually firing over the bar. A goalkeeping howler very nearly led to an own goal when Marrs failed to connect when attempting to clear a back pass and the ball trickled just inches wide of the post for a Bay corner.

There followed a spell when RCA enjoyed their best period of the game, forcing Whitley onto the back foot but resolute and well organised defending prevented any chance of an equaliser, with several corners being dealt with comfortably.

With 20 minutes remaining, Gavin Dick appeared to pick up a knock and was replaced by former Bedlington player Jackson Ward. Bailey Geliher, who had been a thorn in the side of the RCA defence switched to right back with Ward playing in a more advanced role.

Whitley began to regain the upper hand and a first time effort from Richardson whistled just over the bar.

RCA substitute Andrew Johnson brought a rare save from Lister but it was Whitley who were looking the more likely to score and Ward went close with a shot that flashed across the face of the goal and just beyond the far post.

Into the final ten minutes, man of the match Shanks, who had typified the attitude of the Bay players working tirelessly throughout, was replaced by Oliver Cresdee and the teenager almost sealed the victory four minutes later when he burst clear on goal and was only denied by an excellent fingertip save from Marrs, who pushed his shot around the post.

Just one goal ahead, there was always the danger of a breakaway equaliser but Whitley kept pressing forward and in the 90th minute, Geliher crossed from the right, Cresdee controlled the ball in the box to set up Lewis Orrell who drove it through the RCA defence and into the net to spark scenes of delight, showing just how much the goal and the victory meant to the players.

There was still an additional six minutes to be played and there was to be no relaxing as the visitors pressed forward, with former Bay midfielder Matty Weirs prominent as they sought a consolation goal. Keeping a rare clean sheet was now Whitley’s aim and it required a goal line clearance from Harry Yoxall to deny the Wearsiders.

The final whistle brought celebrations both on and off the pitch with this hugely important victory meaning that Nick Gray and his staff have achieved their first objective and can soon start preparing for next season. Before then of course Whitley have one more game, the North Tyneside derby at home to champions-elect North Shields on Good Friday.