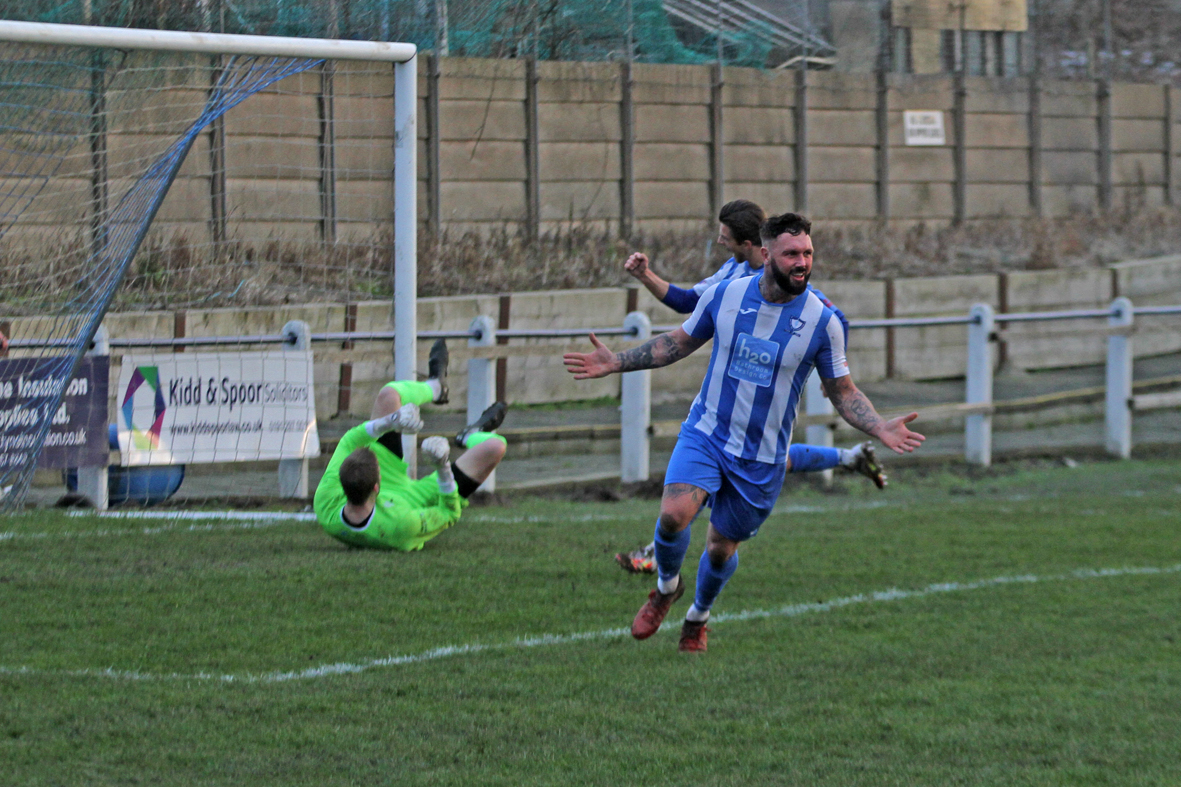 Whitley ended their losing run with a hard fought draw against Bishop Auckland after being reduced to ten men early in the second half. Leading at the interval through Malcolm Morien's 35th minute goal, they lost captain Scott Lowery to a second yellow card and rode their luck at times as they withstood persistent pressure from the visitors.

Following the departure of Derek Forrest, David Styles and Tony Dunn took temporary charge of the team and throughout the side, which included two debutants, there was a renewed gritty determination as they put bodies behind the ball to deny their opponents.

New signings Jack Beverley and Alex Berhan both played their part with encouraging displays while Harry Yoxall, who made his first appearance last week, produced a man of the match performance in defence.

Playing against his former club, Josh Gilchrist started brightly, getting in a strong shot that was blocked by keeper Liversedge. The visitors were having the greater share of possession without really threatening the Bay goal until the 14th minute when Matthew Waters struck a shot wide of the target. Seven minutes later Malcolm Morien had a shot deflected just wide of goal and then Luke Taylor tested Liversedge with a long range shot that the keeper held at the second attempt.

Just before the half hour, Lowery and Coleman were rather harshly cautioned after what seemed an accidental tangle following a challenge in midfield. The visitors then had a shot put wide following a free kick but in the 35th minute Whitley took the lead when the ball was played across the box from the right and Morien reacted quickly, firing home from 10 yards. Boosted by the goal, Whitley might have extended their lead five minutes later but Taylor’s powerful shot flew narrowly wide after appearing to take a deflection off a defender.

Two minutes before the break, Dan Lister made a tremendous save to keep Whitley ahead, leaping to push a curling shot from Callaghan over the bar just as the ball appeared to be heading for the top corner.

One goal ahead at the break, Whitley so nearly doubled their lead just 90 seconds after the restart when Morien’s shot struck the base of the post with Liversedge beaten. Seven minutes later, Whitley were down to ten men when Lowery was shown a second yellow card after a foul just outside the box. The free kick that followed was blocked by the Bay defence but less than three minutes later Bishops were back on level terms following a goalmouth scramble. When the ball rebounded off a post it went back across goal and into the path of Greg Rutherford who slotted it home.

Almost immediately Whitley had a chance to restore their lead but Morien snatched at his shot and fired straight at Liversedge. From this point on, the action was nearly all at the other end as Bishops tried to capitalise on their man advantage. Lister made a fine save to parry a fierce shot, then from the rebound Coleman blazed over the bar with the goal at his mercy. Resolute defending denied the visitors time and again, with a series of important tackles and blocks while Lister made another crucial save with 15 minutes remaining.

Whitley were still a threat on the break and Morien continued to work hard with Gilchrist before being replaced by Adam Shanks, still recovering from injury, for the closing stages. Deep into stoppage time, it was heart in mouth time for Whitley and their fans as a last ditch Bishops effort was hit onto the underside of the bar before being cleared to safety.

The visitors may feel they should have taken all three points but Whitley’s ten men showed great courage as they battled to the end to claim a morale boosting draw.