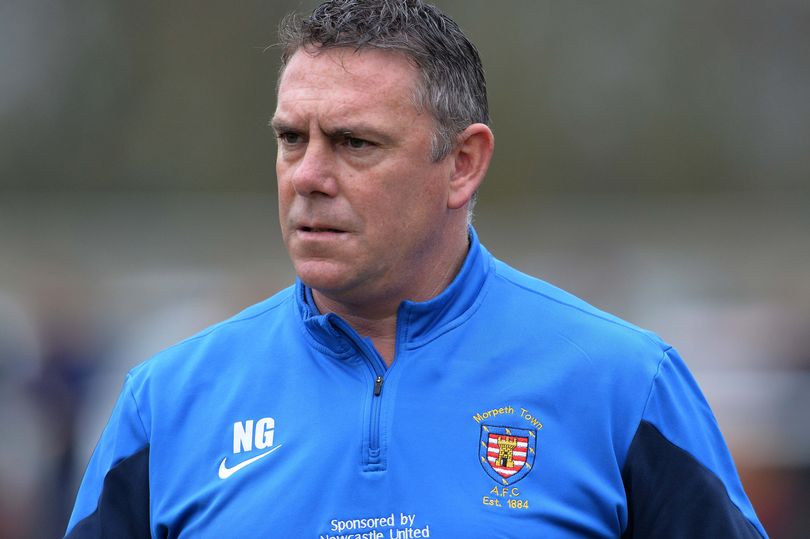 We are pleased to announce that Nicky Gray has been appointed manager of Whitley Bay Football Club.  Nicky spent more than nine hugely successful years as manager of Morpeth Town taking the club from the Second Division of the Northern League up the football pyramid to the Northern Premier League Premier Division. On the way he led them to FA Vase glory at Wembley in 2016.

Chairman Paul McIlduff said  ”We’re delighted to be able to bring in a manager of Nicky’s calibre. His experience of the Northern League will be of huge benefit to the club and we believe we can look forward to exciting times and good attacking football. This is great news for Whitley Bay Football Club!”

Nicky was selected from a very strong field of more than 20 candidates and takes up his post immediately.

Nicky spoke enthusiastically about his appointment at Hillheads.

“It’s a club that’s close to my heart, I’ve watched them for many a year. I’ve been out of management since I left Morpeth and I’ve got my appetite back. I’ve been watching plenty of games, and I’ve seen Whitley Bay six or seven times this season. There were only a couple of jobs that I’d have come back into football for and this was one of them. It’s a big challenge, I’m under no illusions of that, however I like big challenges. I’d like to take this club at least on to the next level. It won’t happen overnight, but it can be done. It’s a club with a lot of history and needs to get back to where it was and be a powerhouse of non league football again.

“This club has a got a great fan base and the fans want to be entertained. Whitley have the second highest average in the Northern League this season with over 400 fans. My objective is to make the fans really look forward to coming to games. We’ve got 11 games left this season, seven at home and they’re all on Saturdays and I’d like to think they’re going to get entertained.  One thing I can promise them is I’ll give my all and I expect my players to work hard and give their all in and out of possession. I want the fans to look forward to their Saturday afternoons and Tuesday evenings and follow the club away from home when they can.”

Nicky is bringing in Stu Brightwell as his assistant. Both men have their UEFA A coaching license.

“I worked with Stu at Sunderland Academy and we were successful in getting players moving on to Premier League clubs. He’s my type of person and it’s important that you have people around who you trust. He does a lot of coaching but this is his first time in senior football management so he’s chomping at the bit!

“What we want of the players is to go on the pitch, know their responsibilities in possession and out of possession.  Will there be changes? In time there will but those who are there now are the ones who will be given their opportunity. Recruitment is one of the really important parts of management. If I’m going to bring a player in I’ll only sign him if I think he can do a job. And then you’ve got to give him a run of six or seven games. Football’s massively to do with confidence; you’ve got to give players chances.

We’ll be meeting the players tomorrow night and hope they’ll buy into what we want to do and finish the season strongly.  They’re the people with the shirts so it’s up to them. I’m really looking forward to it.”