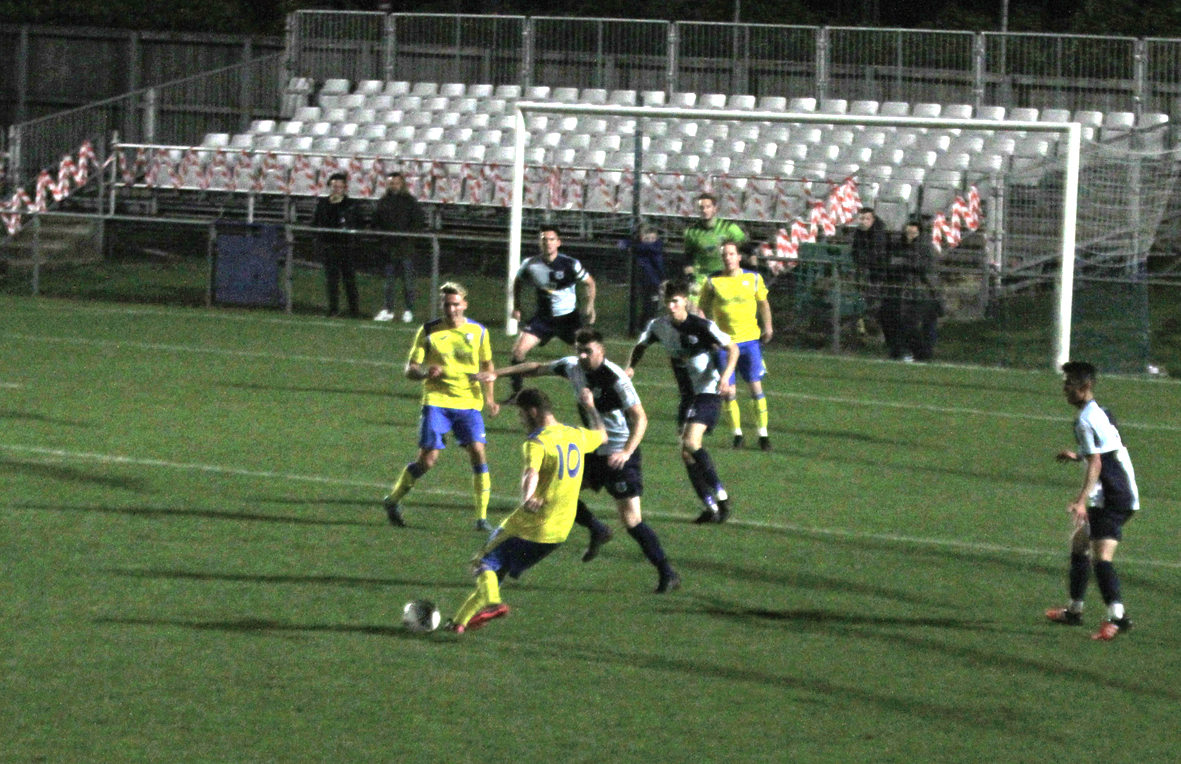 A dramatic stoppage time goal from Jamie Dunn gave ten man Whitley a hard earned victory on a very windy night at Bishop Auckland. With both sides finding it difficult to master the difficult conditions, it appeared that the wind would be the only winner until Dunn produced a stunning shot that flew into the top corner of the net to the delight of the travelling fans.

On loan striker Jamie Clark made his full debut in place of the injured Adam Shanks, while there was a welcome return to the starting eleven for long serving defender Callum Anderson, now recovered from a back injury.

Whitley opted to play against the wind in the first half and the impact of the elements soon became obvious when an overhit ball by the hosts flew out of the ground and across the neighbouring supermarket car park. Another speculative long range effort from the home side was comfortably gathered by Dan Lister but just before the quarter hour mark, Whitley went close when Clark flicked a cross from the right just beyond the post. Ten minutes later, a ball from the Bishops’ left flew harmlessly across goal and out of play.

The home side were struggling to test the Bay defence and it was Whitley who were playing the better football, keeping the ball on the ground and stringing some good moves together. Just before the interval, Coulson’s cross into the goalmouth was sliced into the air by a defender but Gavin Dick slipped just as he was attempting to get a shot on goal and the ball was cleared. With the game goal-less at the interval, Whitley would have been the happier of the two sides knowing that they would have the wind at their backs in the second half.

They quickly responded after the interval with Jamie Dunn getting a shot on target before Tom Smith sent a powerful volley narrowly wide. Injury forced Scott Lowery out of the action on the hour as the game began to open up. Henry Dorward sent a header wide of the post before Bishop Auckland forced two excellent saves from Lister. Firstly the Bay keeper got his fingertips to a cross shot from Murphy, pushing the ball across goal and away from danger. Barely a minute later he made an even better save, pushing a strong shot from Suddick round the post. The hosts were showing more attacking intent than when they had the wind at their backs but good defending was keeping them out. A second injury then struck Whitley, with Tom Smith, who had been having a good game in defence, unable to continue.

Whitley appeared to be the victims of some questionable decisions and just seconds after a foul by the hosts was allowed to go unpunished, Gavin Dick was cautioned for what seemed a minor offence. Frustration showed again shortly afterwards when Mitchell Ramsay was sent off after showing his dissent at a refereeing decision.

From a position where they were looking for a winning goal, indiscipline meant that Whitley now had to see out the final quarter hour with just ten men. Bishop Auckland saw their chance and pressed forward in the closing stages but Whitley were still a threat on the counter attack. Clark went close following good build up play when he turned quickly on the ball and drove in a shot that was held above his head by Liversedge. With just three minutes remaining, the Two Blues won a free kick in a dangerous position just outside the Whitley box. However the shot was blocked and a second attempt flew high over the bar.

With the game into stoppage time, Whitley attacked down the right with Orrell playing the ball down the line to Clark, who in turn put a great crossfield pass to Jamie Dunn out on the left wing. The acting skipper then advanced to the edge of the 18 yard box before unleashing a powerful right footed shot that flew past keeper Liversedge and into the top corner of the net for a goal worthy of winning any game.

There was little remaining time for Bishop Auckland to respond and Whitley were soon celebrating back to back league victories for the first time this season, along with a rare clean sheet.