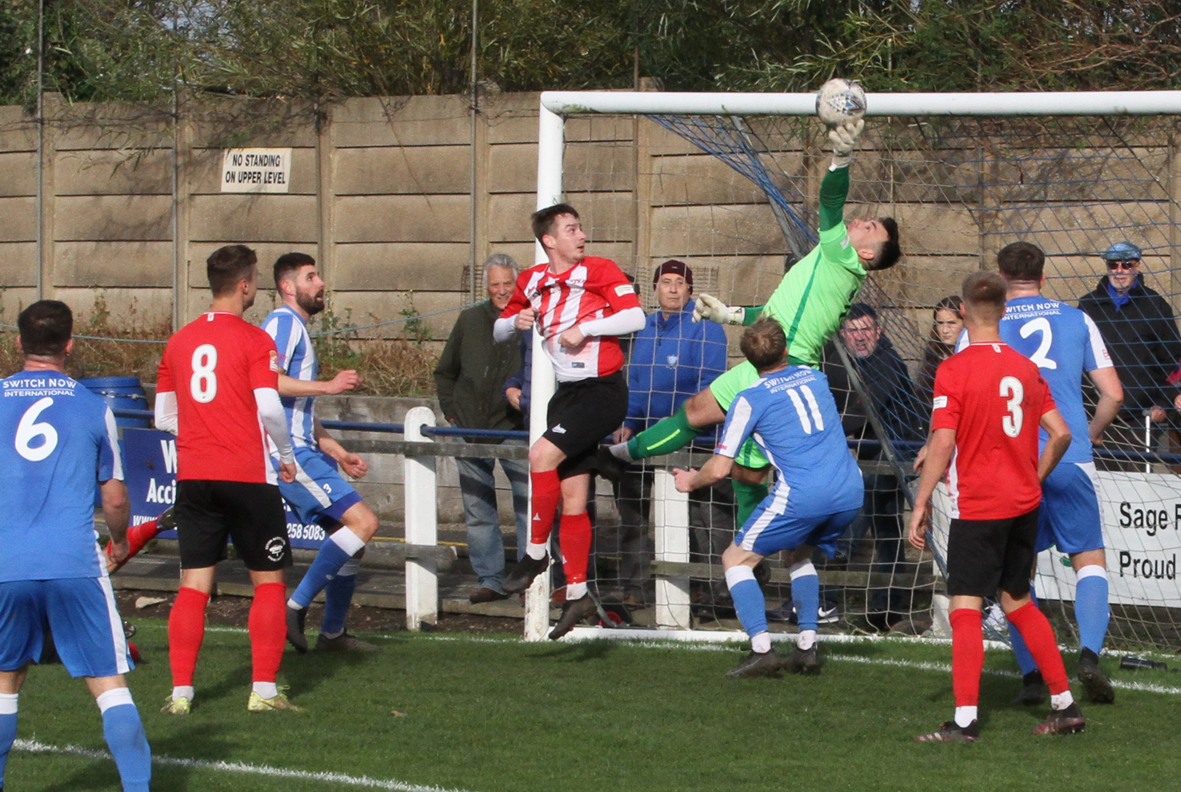 Saturday’s victory over Guisborough was Whitley Bay manager Derek Forrest’s first win since taking sole charge of the team and he was a very happy and relieved man when speaking after the game.

“Yes it’s a great result because it’s a much needed one as we all know. We’ve worked and talked behind the scenes in training about what’s needed to win a Northern League game and we’ve done that today. It’s a big relief as well. We’ve been in a hard spell and we had some good performances and blips as well, but we knew this spell is the one when we’ve got to turn round and get some winning performances. We started brightly and then they started some clever play, quick play and got behind us once or twice. They got on top a bit and we made some great recovery tackles and that massively kept us in the game. To go ahead when we did was great timing. You always want to build on that but they came back at us again. Today’s become an exercise in getting a good shape, a defensive shape. We’ve conceded a penalty which was a massive blow, but as the second half went on we’ve managed the game well, maybe with a bit of luck as well. We got the winning goal and managed to see the game out which was a big exercise for us.  To win a game is exactly what we needed at this stage.

“You have to make changes when you’ve lost heavily and when you make a lot of changes you’re smashing through consistency, you’re getting rid of complacency as well. But the lads haven’t played together and they’re finding out about each other. They’ve just had one training session together and in that respect they’ve done well.

New signing Elliot Watson made his debut in defence and the manager was pleased with his performance. “Elliot’s a good lad, he’ll only get better, he’s honest, he’s solid, works hard and he loves the game.”

Two other new signings, Aidan Rutledge and Jamie Clark, both strikers, came off the bench in the second half, giving extra attacking options. “Mitchell (Ramsay) has had to come off early because of a booking and you’re worried in case there’s a sending off following.  We’ve good replacements that have got a threat and both lads, Aidan and Jamie, have got goals in them.  One thing that’s important was I felt really comfortable about the bench, because for the first time we’ve got two centre backs on the bench. We’ve got Craig and Tom out so we didn’t have the full backs today and had to play centre backs in their positions, but with a stronger bench and hopefully everybody staying fit we’ll turn the corner with a better squad together as we go into a period of Saturday then Tuesday games.

“Callum Anderson has been training after his injury setback and is back in the squad, but was it a day for Callum to make his comeback today? Did we need to use him? Well we got by that and didn’t have to use him, but it’s great to see him back in the squad.

“Playing two games a week is where your bench and squad become important because people aren’t always available because of work commitments. Not everyone can play football as often as they could before Covid, but the squad’s better and hopefully with that bit more rotation you’re looking after people better and they probably won’t all need to play Saturday and Tuesday.

“I must say that the crowd have been fantastic.  There were almost 400 here today. They keep coming back and they get behind the lads.  It’s great to see them and I’m really delighted for the fans and with this win!”