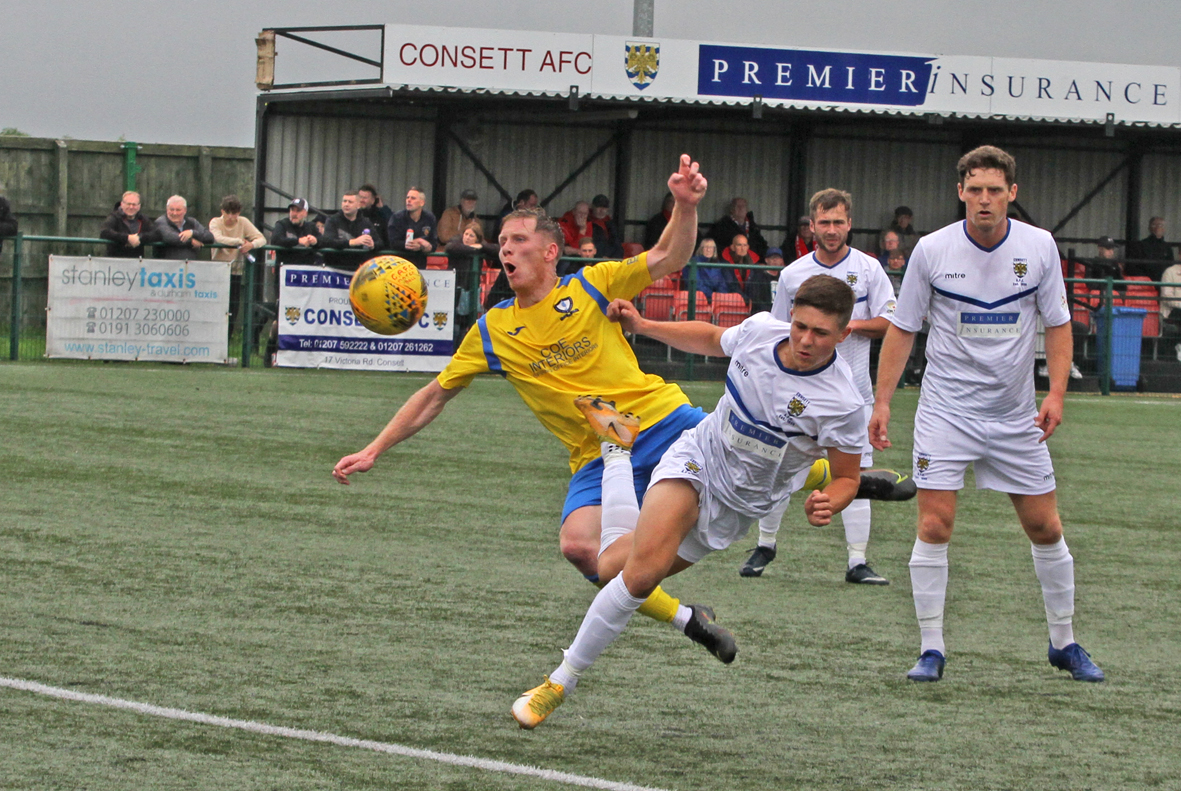 Whitley produced a battling performance at Consett and while the league leaders deservedly came out on top, the game was much closer than the final score would suggest. Mitchell Ramsay, a striker signed during the week from Seaton Delaval, came straight into the side for his debut. There was little to choose between the sides in an even first half and it took a rather soft penalty after the interval to give the Steelmen the lead. Two late goals, both taking deflections on their way into the net, were harsh on Whitley, who pushed their hosts all the way.

Starting the game brightly, Whitley won a free kick inside the first minute and Luke Taylor’s effort was deflected wide. From the resultant corner, a header flew just over the bar. The next incident of note came when an in-swinging corner by Jon Weirs almost caught out Kyle Hayes but the former Bay keeper leapt to palm the ball over the bar just ahead of Scott Lowery.

After Richard Coulson had a shot saved, play switched to the other end in a quick break by the hosts and Dan Lister made an excellent save at point blank range to deny Stephen Callen.

Another effort by Coulson was saved before Lister did well to push a well struck shot from Dale Pearson over the bar.

With the game goal less at the break, Whitley began the second half on the attack and almost immediately Jason Chanayire had a shot pushed wide by Hayes, who was called upon again eight minutes later to keep out a powerfully struck shot from Coulson.

The key moment of the game came in the 58th minute when referee David Pill awarded Consett a penalty for what seemed an innocuous challenge as Callen burst forward into the box.  Dan Lister dived full length and got his fingertips to the spot kick by Pearson but could not keep the ball out.

The goal gave the home side a confidence boost and they gained a stronger grip on midfield but Whitley were still very much in the game. Crucially though, despite all their efforts they were unable to test Hayes and his defence. Seven minutes from time, Consett added a second goal when Jake Orrell’s corner was headed home by Metcalfe, whose effort struck a Bay defender on its way into the net. There was no way back for Whitley now and five minutes later, they were dealt a cruel blow when a shot by Luke Carr from the edge of the box took a huge deflection and flew into the far corner of the net, leaving Lister completely wrong footed.

While there was obvious disappointment at the result, a Bay side much depleted through injury had given a good account of themselves against a side who are one of the favourites for promotion.