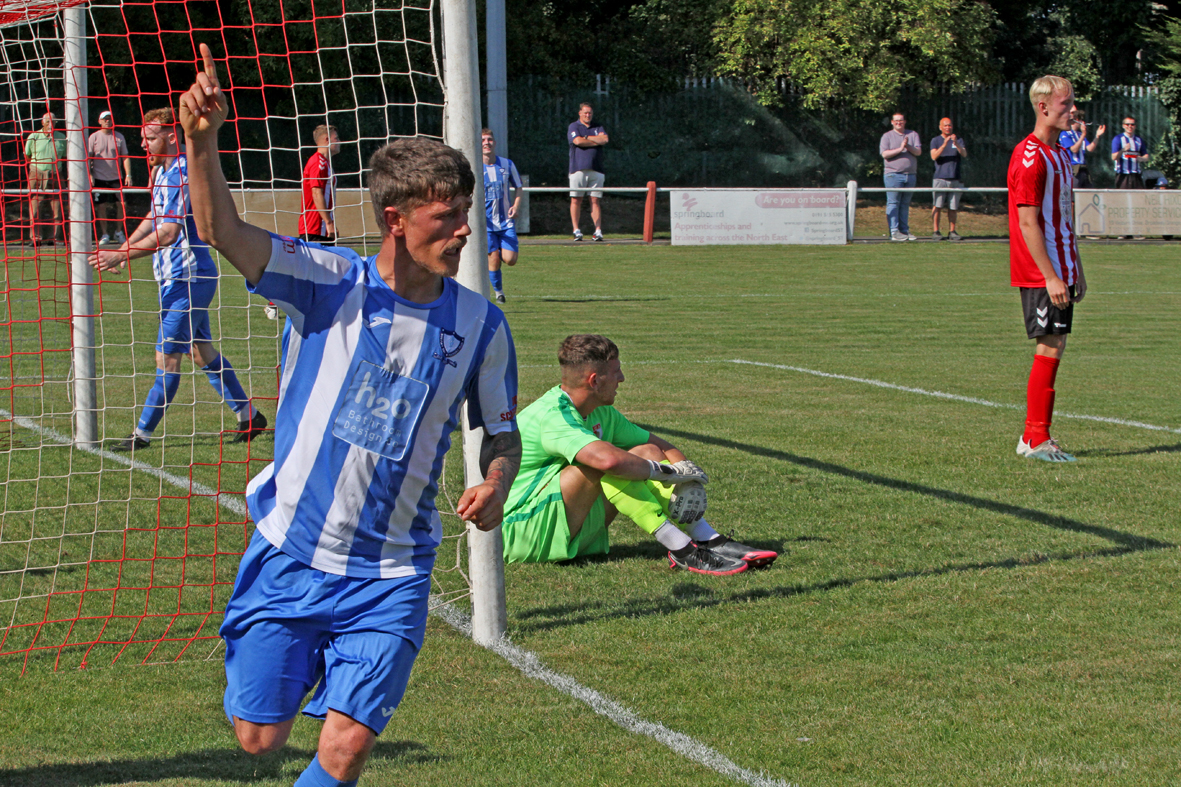 Whitley continued their winning run with a well deserved victory at Sunderland RCA, with a goal in each half from Adam Shanks who was making his first start of the season after recovering from injury.

RCA are notoriously difficult opponents on their home ground but the resilience that Whitley are developing was in evidence again with every player contributing to the success of the side on a warm August afternoon in Ryhope. In addition to Shanks, defender Adam Hutchinson was back in the starting eleven following injury and Stephen Turnbull was also included in a strong looking side.

Early chances were at a premium, the first of note coming in the 12th minute when Michael Colquhoun, one of five ex-Bay players named in the home squad, wriggled clear but Dan Lister came out to smother the ball and clear the danger.

After a free kick 25 yards from goal flew high over the bar and out of the ground, Whitley had more success in the 20th minute when an excellent move produced the breakthrough. Sam Irons burst forward up the right wing and delivered an inch perfect cross into the six yard box where Adam Shanks powered a bullet header into the net leaving keeper Keaton Marrs helpless.

Four minutes later Colquhoun went down under a challenge just inside the Whitley box resulting in vociferous appeals for a penalty. The assistant appeared to signal a foul but the referee was unmoved and play was allowed to continue.

Ten minutes later Harvey Neary went close to extending the lead with a long range shot that rebounded off the keeper’s knees but Marrs was able to recover and dive on the loose ball. Moments later as Whitley kept up the pressure, Ben Richardson was cynically tripped as he broke forward towards the box with the offender Jordan Lavery cautioned for the offence.

Keeping a grip on midfield, Whitley forced the home side back up the pitch. The best chance in the closing stages of the half came when Luke Porritt drove in a shot that was blocked. Leading at the interval, and with the advantage of the slope in the second half, the omens looked good for Whitley but in the event it was RCA who began the brighter after the break, Denver Morris drilling a low ball right across goal beyond the reach of attackers and defenders alike. A header from Davison went the wrong side of the post before the same player directed his effort straight at Lister. Two more attempts by the home side were off target, including one by former Bay striker Callum Patton which should at least have tested Lister.

Just before the hour mark, a cross into the RCA box by Porritt just eluded both Neary and Gilchrist when a touch from either man would have been enough to find the net.

Coming more into the game as the half progressed, Whitley stepped up their efforts to get a second goal and it duly arrived with just under 20 minutes remaining when a corner was headed back towards goal by Scott Lowery and Shanks reacted first, smashing the ball into the net from six yards before the home defenders could close him down.

Almost from the restart, the home side might have reduced the arrears but Johnson put the ball just wide of the post.

Back came Whitley and with 13 minutes to go, with Marrs well off his line, Shanks so nearly completed a hat trick but his shot from the left of the box crashed off the base of the far post and away to safety.

With ten minutes remaining, a brave defensive header by Elliott Day resulted in a clash of heads and a lengthy delay while the Bay defender received treatment. Unsurprisingly he could not continue and had to be replaced for the closing stages.

Whitley comfortably saw out an extended period of stoppage time to record their fifth consecutive victory, a result which lifted them to second in the table and goalkeeper Dan Lister was able to celebrate his 23rd birthday with a clean sheet.