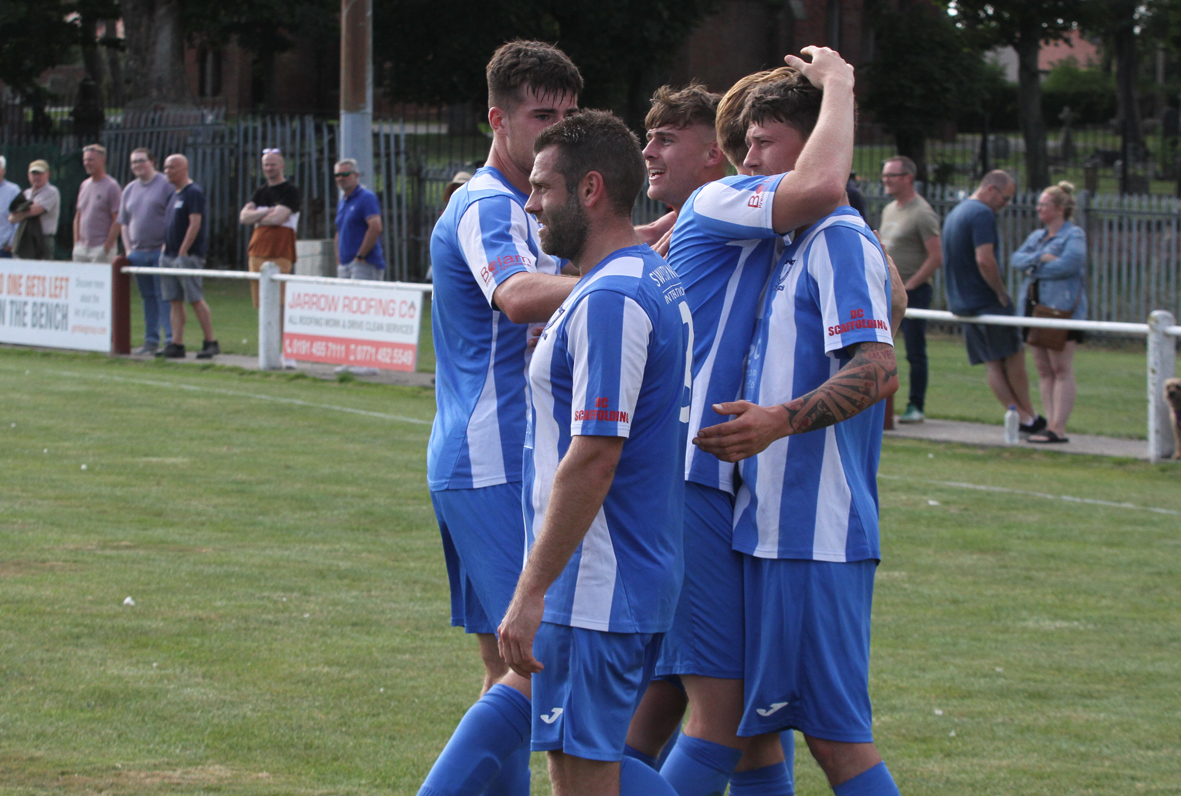 Bay manager Nick Gray was clearly very happy with his team’s 2-0 win at Sunderland RCA, their fifth consecutive victory which saw them climb to second place in the Northern League First Division table.  “That was probably one of the most satisfying wins of the season if I’m being honest, against a decent side. It’s a difficult place to come but yes, I’m delighted with the three points and also with the clean sheet.

Acknowledging that RCA made it hard for Whitley he continued “You don’t expect anything else here. They’ve had a couple of defeats including the FA Cup so they’re lacking just a bit of consistency and I think it was important we got the first goal. I thought we played better in the first half up the hill. Second half they came out strong, we weathered the storm and we got a second goal and defended well as a group after that. I thought we defended well as group all the way through if I’m being honest.

“It was good move that led to the first goal. We were looking to try and get in the wide areas, get two on one situations. That showed and we did it with some success. Sam Irons has got a great delivery and Shanksy’s got in there on the post and he’s scored a great header. For me we just had to game manage it in the first half and I was happy about going in at 1-0. I wasn’t worried about scoring any other goals at that stage. I thought first half we did well, now can we do better second half? As it happened I thought we didn’t, but it was still a great three points from the lads.

“For the second goal it was a good delivery, Scott Lowery with a great header and Shanksy in the right space at the right time! Adam’s been frustrated. What he’s done in the past has been fantastic but we can’t live in the past. We’ve got to live going forward and I think he grasps what we want of all our players. We’re all in the same boat and we’ve got to be working hard for the team. I’m pleased for him, he’s been patient to get his chance, he took his goals well, he’s now got to have the hunger and desire to make sure that he stays in the team and that’s down to him.”

Speaking of one of his new signings Luke Porritt who has really impressed in recent games but was rather less evident on Saturday, he commented “I think effort-wise he was fantastic, he didn’t get the deliveries in so much today but he still had a key part to play. I thought out of possession he was excellent all over, he’s good with the young lads; he’s great in the dressing room. He’s a great asset to the club.

“There are still things we’ve got to work on but they’re a great group to work with. We certainly don’t get carried away. We just go to the next game and see how we go there. We’ve still got a lot of things to learn, lots to improve. If you’d said to us at the start of the season we’d be where we are now and out of seven games we’d win six, I’d probably have thought you were a bit mad, but we’ll take it and just move on to the next one. That’s all we can do and that’s what we will do. To be honest I’m delighted for the group because they’re working hard to get the results."

The team spirit and togetherness throughout the squad and management is a huge positive and the support of assistant manager Liam McIvor was highlighted when Nick referred to the loss of his father at the end of July saying “I’ve had a tough time over the past month and I couldn’t have got through it without Liam.”