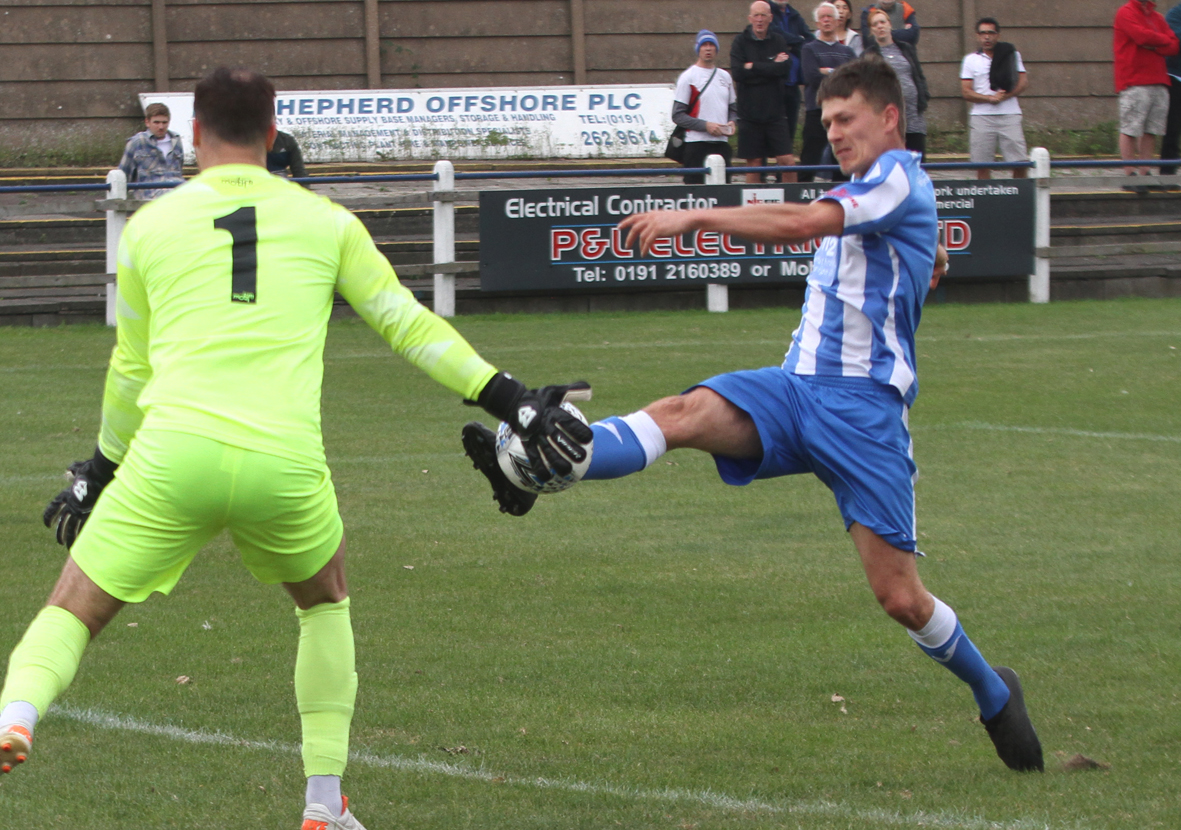 Whitley returned to winning ways with a comfortable victory over Billingham Town, racing into a three goal lead by half time. The visitors fought back in the second half but by this stage the result was never really in doubt.

Henry Dorward made a welcome return to the side following injury and quickly made an impact, drilling home a low shot from just inside the box to give Whitley a 15th minute lead after good work down the left by Mitchell Ramsay. The visitors were struggling to cope with the pace of the Bay attacks and just two minutes later Adam Shanks was only denied by an offside flag after breaking clear on goal. Keeping up the pressure, another chance came after 20 minutes but this time keeper Jack Norton punched clear a shot from Matty Weirs. Four minutes later Ramsay set up another chance for Weirs but this time his attempt flew over the bar.

On the half hour Whitley’s pressure paid off when a free kick into the box was played forward and Shanks got a foot to the ball ahead of Norton, poking it home from six yards.

Town had struggled to make any impression but briefly came into the game as firstly Carter shot wide of the upright before Nelson brought a comfortable save from Bannon.

Back came Whitley and when Jamie Dunn crossed from the left, the Billingham defence failed to clear their lines and Shanks took full advantage, tapping home from close range to put Whitley three goals ahead.

The visitors looked all at sea and unable to stem the flow of Bay attacks and when Dorward raced through unchallenged from midfield, he played the ball through to Ramsay, whose shot was blocked and deflected wide of goal. The corner was played across the face of goal where Shanks sent a glancing header only inches past the back post.

Whitley looked to be cruising to victory, three goals ahead at the interval, but Billingham began the second half looking much livelier and making more effective use of the ball. They pulled a goal back after 56 minutes when substitute Connor Dunlavy drove a shot across Bannon and into the net off the far post but this was a rare attempt on target. Midway through the half, Craig McFarlane spotted Norton off his line and attempted to lob the keeper from the halfway line but his effort went wide of goal.

Whitley made it 4-1 with 13 minutes remaining when Matty Weirs cut in from the left and curled a great shot past Norton and just inside the far post. Ramsay nearly added a fifth but was denied by the keeper twice in the space of a minute, the first save being particularly impressive. Jamie Dunn then headed just over the bar from a right wing corner but in the final minute Town got a second goal, a fine effort from Ashley Lavan which flew into the top corner of the net giving Bannon no chance. It gave the final score a slightly flattering look for the visitors who had been outplayed for much of the game by a Bay side who posed much more of a threat in attack.