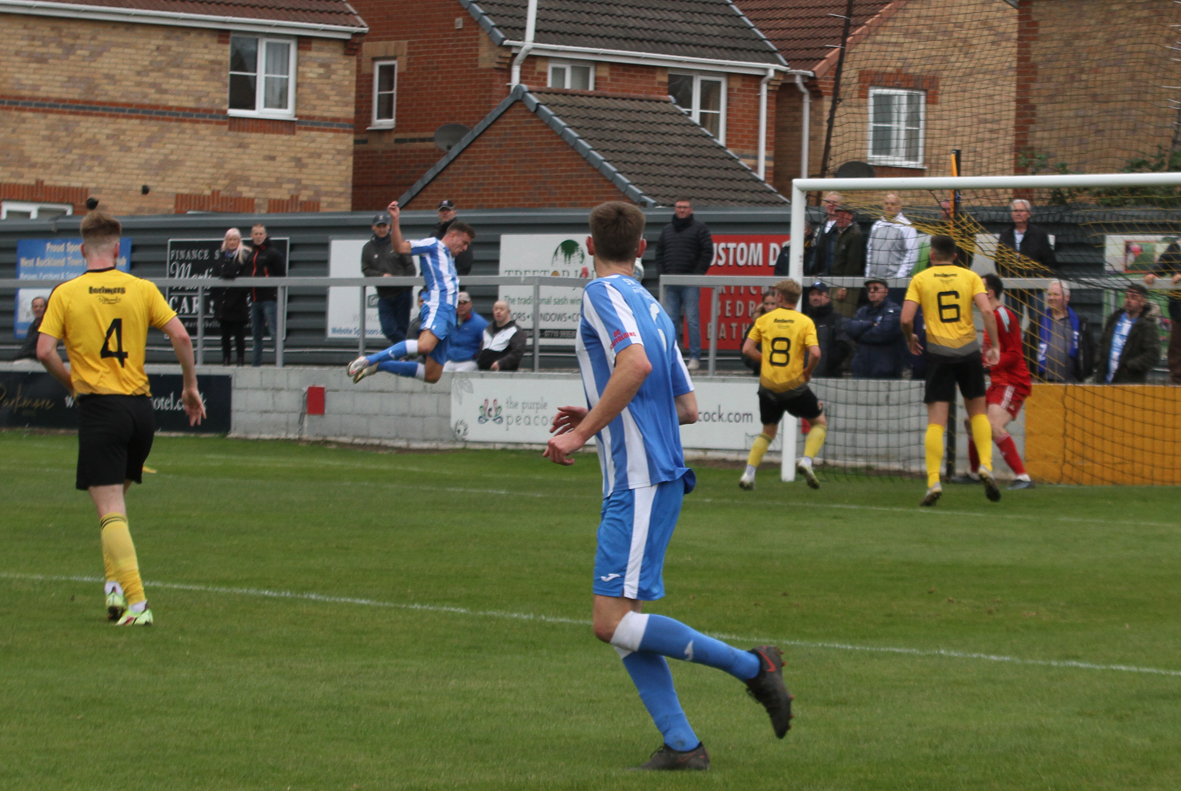 A second half horror show saw Whitley crash to their heaviest defeat of the season at in-form West Auckland. There was little sign of what was to come during a fairly even first half when chances came at both ends but an injury that forced captain for the day Luke Taylor out of the game at the interval changed all that as the Bay defence succumbed under pressure and conceded five goals.

There were two changes to the side that performed so well against league leaders Consett seven days earlier, the injured Craig McFarlane being replaced by Jamie Dunn while Lewis Orrell, signed the previous day, made his return debut in place of David Parker who was unavailable.

After an evenly matched opening, the home side took an eighth minute lead when a misplaced pass in defence allowed Jordan Blinco to run clear on goal and he slotted the ball home giving Dan Lister no chance.

Whitley fought back and both Henry Dorward and Jamie Dunn got attempts on target but failed to trouble keeper Guthrie. With 20 minutes played, Lister made a fine fingertip save to push a long range shot from Hegarty round the post.

Whitley might have got back on terms shortly before the half hour following a quickly taken throw-in by Shanks which gave Michael Speed a chance but he delayed his shot and it was blocked. Three minutes later Whitley created their best chance of the game when Tom Smith crossed from the right to the back post where Speed rose to power a header goalwards only for Guthrie to make an excellent point blank save. Orrell then made a good run from midfield but his shot from the edge of the box was just too high and cleared the bar. Whitley were enjoying a good spell and two minutes later accurate approach work gave Smith a chance from around 12 yards but strong defending saw his shot blocked.

Four minutes before the interval, Lister made another good save, this time from Nicholson and right on half time he made a vital block with his foot to keep the score at 1-0. Luke Taylor suffered a dead leg just before the break and despite attempting to play on, he was unable to continue and was replaced at the start of the second half. The resumption had been delayed due to another injury, this to one of the match assistants so an appeal went out for a volunteer to take his place. A local County Durham registered official stepped in and the game resumed a few minutes late.

Taylor’s injury proved to be a key moment in the game with the reorganised Bay defence immediately looking vulnerable. Nicholson brought a tremendous save from Lister just four minutes after the restart but three minutes later Auckland doubled their lead when Bell headed home a cross from the Bay left. After Lister had come to the rescue again with a fine save, two goals in as many minutes ended any hopes of a Whitley revival. The Bay defence was exposed on their left and on the hour Mitchell slotted home then after a shot crashed off the post, Nicholson made it 4-0.

It went from bad to worse for Whitley as Dunn showed his frustration after a contentious decision and was sent to the sin-bin, leaving his side a man short for the following ten minutes. They held out during his absence but were hit late on by another two goals in quick succession. Substitute Ryan Wright pounced on a loose ball after Lister could only parry a fierce effort from the impressive Nicholson and Whitley’s woes were complete shortly afterwards when Wright knocked home the rebound after a shot hit the bar.