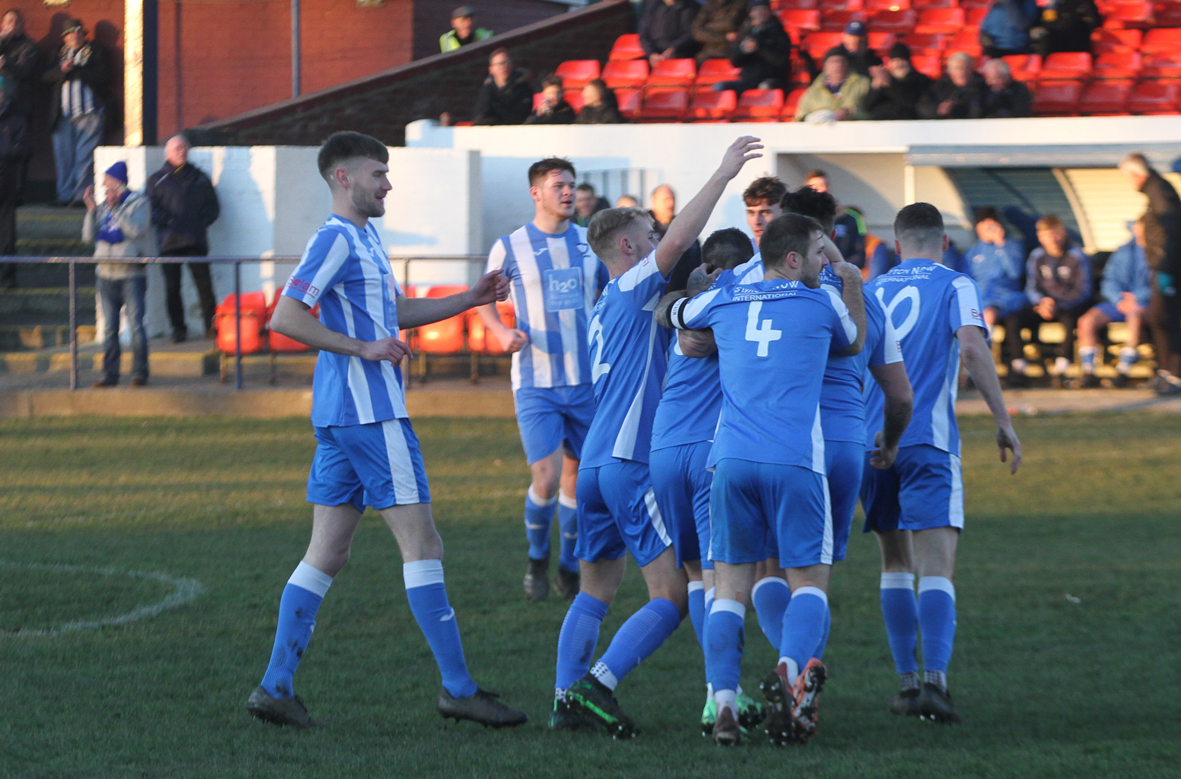 A disastrous second half capitulation saw Whitley surrender a 3-1 half time lead in their local derby against West Allotment Celtic as the visitors stormed back to claim a dramatic victory.

In an encouraging start, Malcolm Morien scored two outstanding goals inside the first half hour, either side of a reply for the visitors. Scott Lowery added a third in the 34th minute but Allotment always looked a threat. In the second half they took complete control with Whitley barely getting a shot on target.

Adam Shanks was one of several Bay players out through injury while there was a return debut for midfielder Ben Richardson and a first start for Harry Yoxall in the centre of defence. It was Richardson who had the first chance for Whitley but he had to react quickly after Watson’s ball into the penalty area rebounded into his path and his attempt was blocked by keeper Hodgson. Allotment immediately raced away to the other end where a shot crashed off the bar and the follow up header was put narrowly wide.

The action continued at a rapid pace and Whitley took the lead in the seventh minute when Malcolm Morien spotted the keep off his line and from almost 30 yards fired a spectacular shot into the top of the net. Two minutes later Hodgson saved low down from McFarlane as Whitley looked to build on their lead.  The Bay captain was at the heart of the action again in the 18th minute, breaking into the left of the Allotment area before appearing to be tripped as he closed in on goal. It looked a clear cut penalty but strong appeals were waved away by referee Adam Nichol.

The visitors drew level six minutes later when a corner from the right was well saved by Lister but Guy Bates slotted home at the back post. Whitley responded well and were back in front just four minutes later. Michael Speed received the ball on the left and his pin-point cross into the six yard box was powerfully headed home by Morien for his sixth goal in seven games.

Continuing in the ascendency, Whitley created another chance just past the half hour but McFarlane’s carefully placed shot was poked wide by the keeper’s outstretched foot. They were not to be denied for long though and barely two minutes later David Parker’s ball into the box was not cleared and Scott Lowery slotted home at the back post to give Whitley a 3-1 lead. The visitors were still dangerous on the counter attack and one minute before the interval it took a well timed goal saving tackle from Lowery to keep out an effort from Hayton.

The feeling at the break was that the next goal would prove crucial with Whitley needing to press home their advantage. Parker nearly gave them that goal but his 57th minute effort was blocked by Hodgson. Just 60 seconds later, Allotment reduced the arrears when Donaghey’s corner was poked home at the near post by Hayton. It was just the boost they needed and they went straight back on the attack with a shot flying high over the bar. Within three minutes they drew level and it was Hayton with his second goal who grabbed the equaliser, getting on the end of Thompson’s cross.

The complexion of the game had changed completely and having staged comebacks in their previous two games, the visitors were exuding confidence while Whitley were struggling to put passes together, let alone reproduce their attacking moves of the first half.

In a rare Bay attack, McFarlane went down in the box but again, no penalty was given. With 20 minutes left, Hayton missed a great chance for the visitors, dragging his shot wide of goal while Whitley suffered a blow when Lowery went down injured and despite treatment was forced off the field, to be replaced by Josh Gilchrist.

The pressure was all coming from Allotment and after danger man Hayton fired narrowly wide, they took the lead in the 78th minute when Thompson capitalised on poor defending to slot home what proved to be the winner. In stoppage time, Gilchrist’s shot from the right was deflected inches past the far post and even keeper Dan Lister came forward for the corner in an effort to forced a last ditch equaliser but it was to no avail and Whitley’s dismal run continued with a fourth defeat.