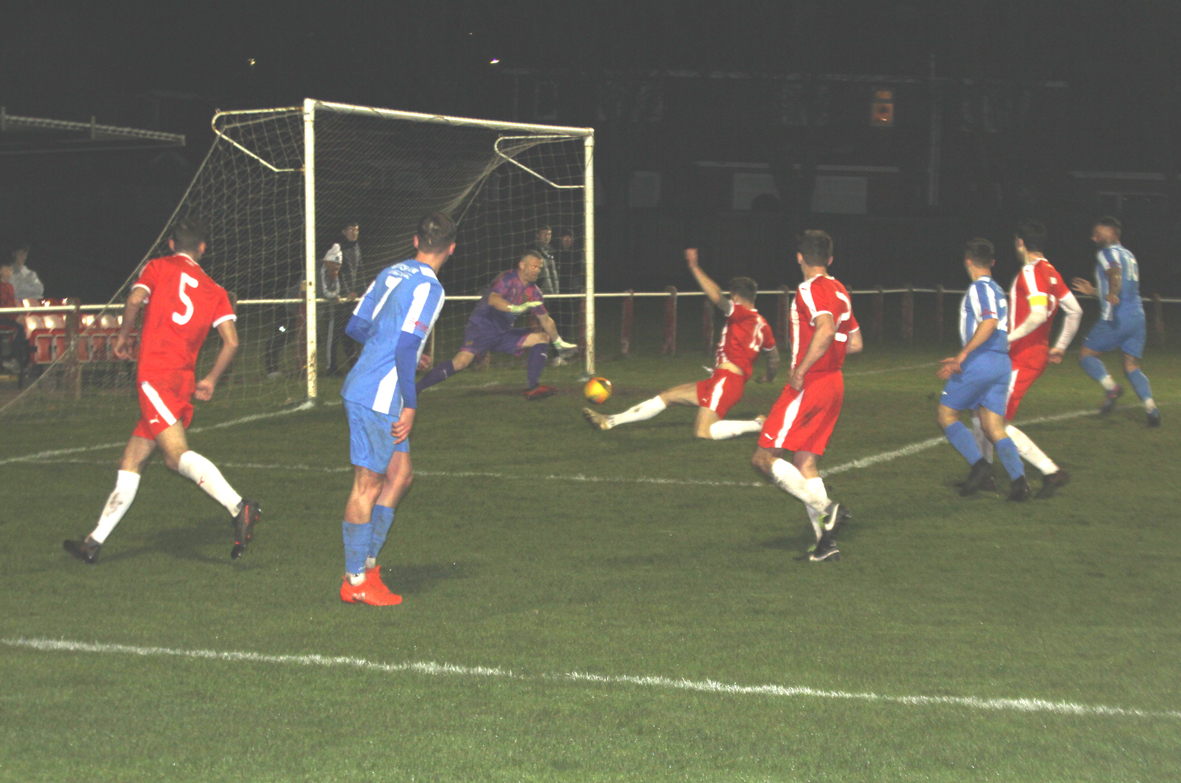 Whitley are out of the First Division Cup and while there was only a single goal to separate the sides in this Quarter Final tie, there could be no disputing that Ryhope were much the better team on the night and were worthy winners.

Nick Gray has used this competition to rotate his side and give everyone in the squad their opportunity but as he readily admitted after the game, this policy had not produced the performance he had been wanting.

Probably the surprise team of the season, Ryhope CW have exceeded all expectations and are in the top five of the League and have reached the Durham Challenge Cup Final after beating National League North Spennymoor Town in the semi final.

Ryhope looked the quicker side right from the kick off and it took a good block by teenage keeper Isaac Libotte in the 10th minute to keep them out. Five minutes later in Whitley’s first attack of note, Jake Jensen had a shot blocked but play quickly reverted to the other end and when a corner was played into the six yard box, Karl Southern rose unchallenged to head powerfully into the net.

With 20 minutes gone, Malcolm Morien played the ball through to Shanks but his shot was saved by Ryhope keeper James Winter.

The home side were having much the better of the game and the only other occasion that Whitley briefly threatened came in the 33rd minute when Shanks broke away down the right but his cross into the box was cut out by the keeper.

Perhaps fortunate to be only one goal down at the interval, Whitley looked far more lively on the restart and pressed forward with much greater determination. Six minutes into the half, good work by Lewis Orrell set up a chance for Shanks but his powerful shot was too close to Winter who pushed the ball over the bar with a fine save. The home defence were kept under pressure for a while but with 56 minutes gone, the Bay goal led a charmed life after Libotte had initially made a good save. The ball ran loose and with defenders struggling to deal with the situation, another shot crashed off the bar before the ball was eventually scrambled away to safety.

On the hour, Scott Lowery went down injured and had to be substituted, Jackson Ward taking his place. Moments later Libotte saved well from Ellis but then just past the midway point of the half, Whitley drew level. The goal came when Lewis Orrell’s ball into the goalmouth from out on the left was diverted past his own keeper by defender Danni Lay, one of three Ryhope substitutes who had only recently come off the bench.

Spurred on by the goal, Whitley pressed forward again and thoughts were beginning to turn to the possibility of another penalty shoot out, as had happened just up the road at Sunderland RCA in the previous round. However, poor Bay defending helped Ryhope regain the lead just six minutes later. Southern found himself in acres of space on the right of the Whitley box and when the ball was played in from the left, he unleashed a great shot across Libotte into the far corner of the net.

The introduction of Kevin Mirzakhanian late on failed to unlock the home defence as Ryhope held on comfortably to reach the semi finals, ending Whitley’s hopes of silverware for another season.

The sides meet again on Saturday at Hillheads with league points at stake and it will require a much improved performance from Whitley – something comparable to what they produced at Guisborough last weekend - if they are to earn anything from the game.