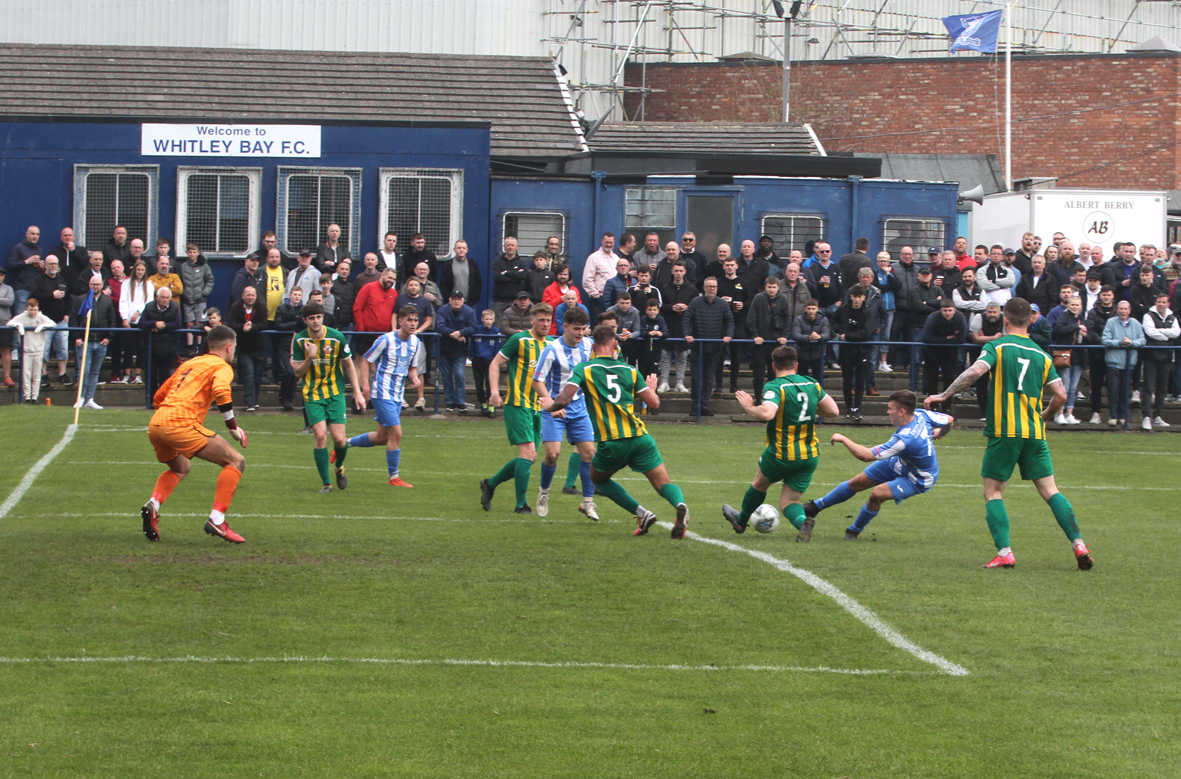 This local derby brought the curtain down on Whitley’s season, one of contrasting fortunes for the North Tyneside rivals. While the Bay had just guaranteed their First Division survival a week earlier, this was the day that North Shields clinched the Northern League title.

The game itself was one of contrasting halves, with a relatively quiet opening 45 minutes during which Whitley contained their opponents effectively with chances at either end at a premium. The second half was dominated by the visitors who eventually ran out worthy winners.

Some of the quite remarkable crowd of 1422 fans, by far the biggest Northern League attendance for several years, were still making their way into Hillheads when the game got underway at midday but they missed little excitement in the opening stages. The first attempt of note came in the 15th minute when David Robinson’s shot from just inside the box was blocked by Bay keeper Dan Lister. At the other end Adam Shanks drilled in a shot that was saved by Marshall. With 27 minutes played, Shanks had another attempt on goal but his shot from outside the box flew over the bar.

A minute later Shields’ striker Dan Wilson got his head to a cross into the box but sent the ball too high to trouble Lister. It was Wilson who produced the best effort of the half seven minutes before the interval when his powerful shot brought a great diving save from Lister.

Two minutes later Shanks raced away down the right and his ball across the face of goal was headed behind by former Bay defender Tom Bexton. Jackson Ward then had a shot blocked by the Shields defence but the half ended level with neither side able to break the deadlock.

The pattern of the game changed just five minutes into the second half when Shields won a corner on the left. Cartwright swung the ball into the goalmouth where Wilson sent a glancing header beyond Lister into the far corner of the net, to the delight of the visiting fans who were packed behind the Hillheads end goal.

The goal boosted the confidence of the visitors and they tried their luck with several shots from distance, one effort from Cartwright flying only just over the bar. Whitley were struggling to get the ball out of their own half and just past the hour, they conceded a second goal. Poor defending left Wilson unmarked in front of goal when he received a ball over the top from Robinson and he gave Lister no chance with a powerful shot from ten yards.

The game was effectively won and it took another fine diving save from Lister to keep out a shot from Robinson.

Both sides made substitutions with Whitley bringing on Malcolm Morien and Kyle Errington but it was Shields’ substitute Dan Turner who was at the centre of the action on 75 minutes when he was deemed to have been tripped by Luke Taylor for what appeared to be a very soft penalty. That did not concern the Robins as former Bay Vase winner Gary Ormston stepped up to fire a perfect spot kick high into the top corner of the net giving Lister no chance whatever.

Whitley kept battling away and less than two minutes later Josh Gilchrist poked a half chance over the Shields bar. Lister made another fine diving save this time from substitute Ryan Carr but with seven minutes left, Whitley finally got on the score sheet. Harry Yoxall played a free kick from wide on the right to the edge of the box where it fell for Morien to power home between Marshall and his near post. It came too late to affect the outcome but it did at least give the Bay fans something to cheer on a day that belonged to the visitors whose title winning celebrations were not long delayed.