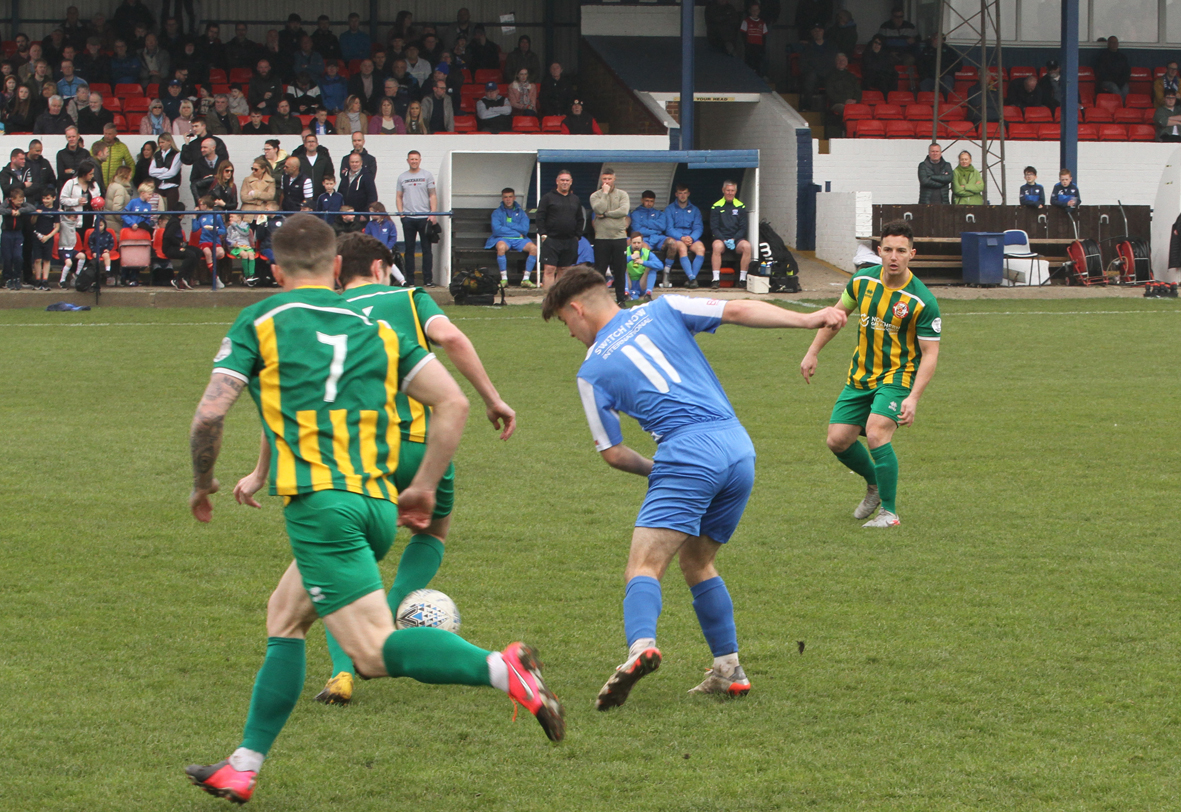 Speaking after Friday’s local derby against North Shields, which was Whitley’s final game of the season, manager Nick Gray reflected on the game, his time at the club so far, and his plans for next season.

“First I’d like to say congratulations to North Shields for winning the league. That’s what you’re in football for, to win. I’ve had some successful days myself, and the club has as well, and you’ve got to learn from the tough days, enjoy the good days and be more hungry for the good days.

“Today I thought in the first half we did well. We neutralised them. I didn’t think they were much of a threat. They had the odd attack but I thought our game plan worked for the first half. I was disappointed to come out for the second half and concede early doors. They got a bit of momentum from that; the second goal was disappointing and the third goal for me was a soft penalty. But we kept on going (and pulled one back) and that’s what I’ve been saying about these lads, since I’ve been here they’ve kept on going in training and kept going in games. It’s just lacking that bit of quality to be brutally honest.

“North Shields have won the league so that’s the yardstick, that’s where you think ‘can we as a club be there next year?’  Me, yes I’m confident we can. I’ve had three players agree already to come in for next season. There will be changes needed, that’s me being honest and frank. I’ll speak to all the players but the league table doesn’t lie! Even when you’re winning things, you've got to be always on the move and always progressing, not standing still so it’s been a tough year for the club.

“You look at the fans today, 1400 at the game today. Now I’m not saying we’ll get that many at the games each week but fans will come back if they get entertained.  We’ve got plans for next year, some really good pre-season friendlies already arranged.  I want the club to match my ambition and if we do that the club’s in a good place for next season. You want days like this when you’re on the winning side and have success. That’s what I’ve missed when I’ve been out of the game. I’ve missed that winning mentality and in these twelve weeks I’ve learnt a lot. The fans have been fantastic. I got a lovely note from the fans today which was really special, I really appreciate it. They’ve been loyal in difficult days and now it’s about taking the club forward. Usually at the end of the season you want your break, you want your rest but I’m chomping at the bit to get going for next year!”

“Where the Northern League is now, in the wisdom of the FA, you’ve got to be keeping moving on up, you can’t stand still. You can a have a nucleus of good senior players and good young players.  We’ve had some young players who’ve come in with senior players who’ve lacked a little bit of confidence and it’s always tough to be fair asking the young players to play so many games. I looked at Bailey Geliher today and I thought he looked tired but if I’m honest he’s probably played a bit too much for us really. At 16 years old we shouldn’t have had to rely on him but he’s been a breath of fresh air, but he’s not the only one and I’ve got to say I cannot fault the lads for what they’ve given effort wise. We’ve just got to learn from our lessons. The number of players who’ve gone through the squad this year, it’s too many.

“I’ve got a six and a half week plan for pre-season. You want your squad sorted after two weeks of that and you want to work on those 18-19 players for next season, playing in friendlies, putting a lot of hard work in pre-season. For me one thing we‘ve lacked a little bit is fitness. Pre-season’s two months away but there’s some lads there that need to continue doing fitness work now if I’m being honest."

Few of the players will have played in front of such a large crowd  - 1422 fans were at the game on Friday – but as Nick commented “It was great experience. You should be hungry to have more of that. Football’s not a real pressure, people say it’s a pressure but for me it’s not. Pressure for me is things like when your mortgage is a month late!  Football pressure’s more exciting; you want to relish and thrive on those occasions. You should want to play in front of big crowds and want to show your talent.

“We’ve played with a little bit of fear this year, been nervous but we stayed up and that was the target and now the hard work starts.  I’m a hard working person and people who know me will tell you I work seven days a week and I never accept what I’ve got. I always want to do better.”