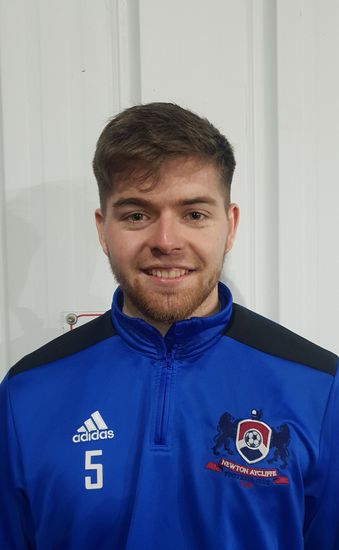 It has been a busy week at Hillheads with several players arriving and others departing as manager Derek Forrest reshapes his squad. Last Saturday saw three new signings, defender Tom Smith and midfielders David Parker and Michael Speed all brought in to make their debuts in the game at Thornaby. Another new signing, Calvin Boyd, was named on the bench in that game. The latest addition to the squad is centre half Aidan McGee (pictured) who has been signed this week from Newton Aycliffe.

We would like to welcome all five players to Whitley Bay and hope they enjoy their time with us.

As some players arrive, inevitably there have to be departures and after a year at the club, midfielder Matty Weirs has left to join Sunderland RCA. In his time at Hillheads, Matty made 26 appearances and scored 7 goals, the most memorable being the winner, ironically at RCA, scored on his Bay debut.

Also moving on is teenager Dan Jones, who made two substitute appearances earlier this season. Dan is joining Bedlington Terriers, who have appointed former Bay coach Andy Ferguson as their new manager.

We would like to thank all three players for their efforts while at Whitley Bay and we wish them the very best of luck in their future careers.