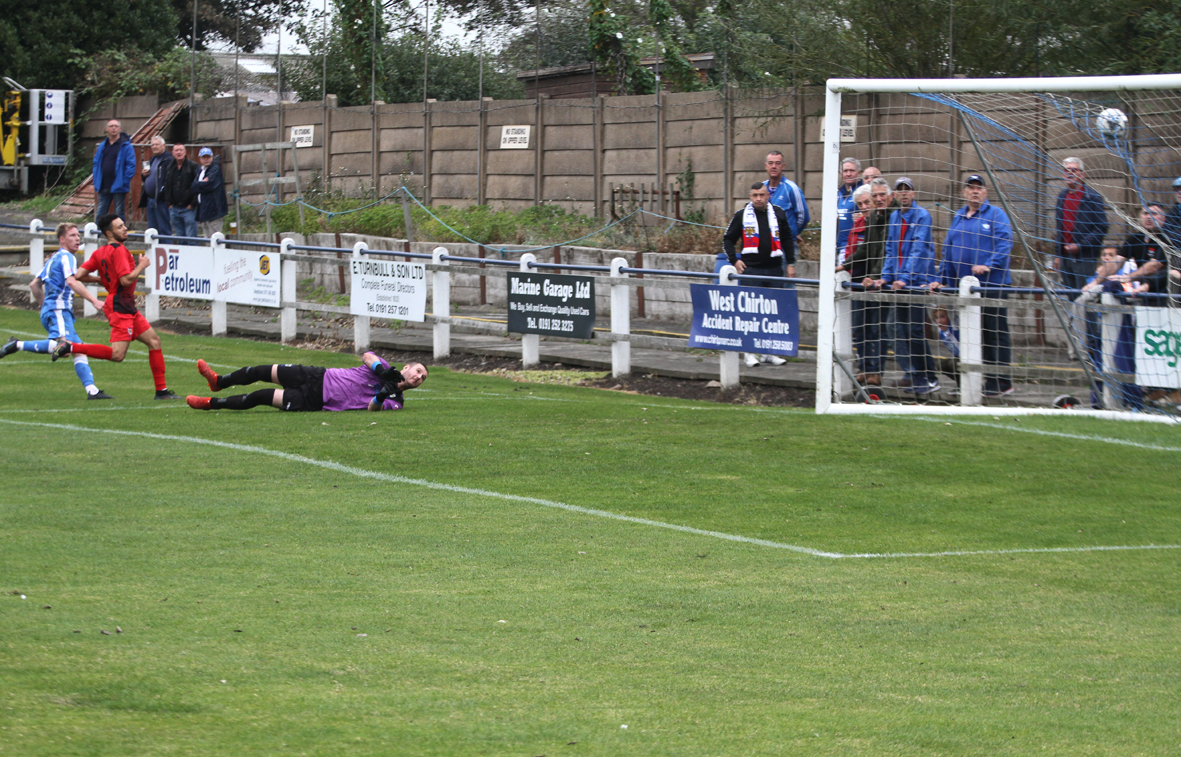 League leaders Consett edged an exciting, action packed game that kept the Northern League’s biggest crowd of the season enthralled and entertained from start to finish.

Whitley may feel that they deserved a share of the spoils after forcing the Steelmen to defend for lengthy periods of the second half but despite this defeat, there were many positives to take from a game which ended with both sides receiving a standing ovation from the 637 fans who were fortunate enough to be present at Hillheads.

The drama began with less than 20 seconds on the clock when Callum Guy was clipped by Luke Taylor as he broke into the box and referee Steven Lawson awarded a penalty. It looked like a dream start for the visitors but Dan Lister dived to his right and saved Stephen Callen’s spot kick just inside the post, the first in a series of fine saves by the Bay keeper.

In the eighth minute, Henry Dorward burst through on the right and when he cut in, his shot took a deflection almost wrong-footing former Bay keeper Kyle Hayes who did well to keep the ball out with his feet.

Consett quickly responded with Guy forcing Lister to push a powerful shot round the post. The action continued at a rapid pace and in the 13th minute Whitley took the lead. The goal came when Dorward played a cross field ball to Mitchell Ramsay who broke clear on the left, cut in and crashed a tremendous shot high into the net leaving Hayes helpless.

Back came Consett and on the quarter hour, Lister made a great diving save to push away a goalbound effort from Callen. Four minutes later Michael Speed brought a good save from Hayes but within 60 seconds Speed had another great opportunity after racing clear of the Consett defence with only the keeper to beat, however Hayes made an excellent and crucial save. Instead of being two goals behind, the Steelmen were back on level terms just one minute later when Calvin Smith went past a defender before slotting home from a narrow angle, the ball hitting the inside of the far post on its way into the net.

The goal spurred on the visitors but Whitley kept retaliating. With 25 minutes played, Ramsay whipped in a dangerous low cross but the ball was cleared from inside the Consett six yard box. A minute later, Callen latched onto a long ball over the Bay defence but to the relief of home fans, his lobbed effort cleared the bar.

The visitors were getting on top and deservedly took the lead in the 33rd minute when Metz went on a great run down the right then cut in along the by-line before playing the ball across goal where Jake Orrell had a simple tap-in.

Whitley looked in danger of being over run and three minutes later Callen brought a tremendous save from Lister who pushed the ball away just as it looked destined for the top corner of the goal. Two minutes later Lister was the Bay saviour once again parrying a powerful effort from Guy, with McFarlane putting the loose ball behind. From the resultant corner, Callen powered a header towards goal only for Lister to claw the ball away and keep Whitley in the game at the end of a breathless first 45 minutes.

There was a slightly calmer start to the second half but when Consett put a neat flowing move together in the 53rd minute it proved crucial. A shot from Smith was blocked on the line and the ball ricocheted around the goalmouth before an attempted clearance rebounded off former Bay defender James Martin and ended up in the net. It was undoubtedly a fortuitous goal but it gave the visitors a valuable two goal cushion.

Whitley remained undeterred however, and five minutes later, when substitute Jamie Dunn headed a free kick down into the box, the visitors were punished for slack marking as Adam Shanks lashed the ball past Hayes. There was still more than half an hour to go and urged on by the majority of the bumper crowd, Whitley forced the league leaders back on the defensive. Inevitably after the tremendous pace earlier in the game both sides began to tire and Whitley made use of all three substitutions including Jon Weirs and debutant Aidan McGee, in an effort to find an equaliser. After being kept busy throughout the first half, Lister was having very little to do as most of the play was now in the Consett half of the field. In the 74th minute Dorward made a great run down the right and with rain having started to fall, his cross into the box skidded across the now slippery surface and Shanks, sliding in at the back post, could not direct his effort and the ball flew wide. Six minutes later, Speed put the ball narrowly wide and although they kept pressing forward right through added time, forcing a series of corners, Whitley could not break down a solid defence and the visitors held on to claim a narrow victory and extend their lead at the top of the table to six points.

This was a game that was a credit to both sides and provided the sort of entertainment that should surely bring even more fans to Northern League football.