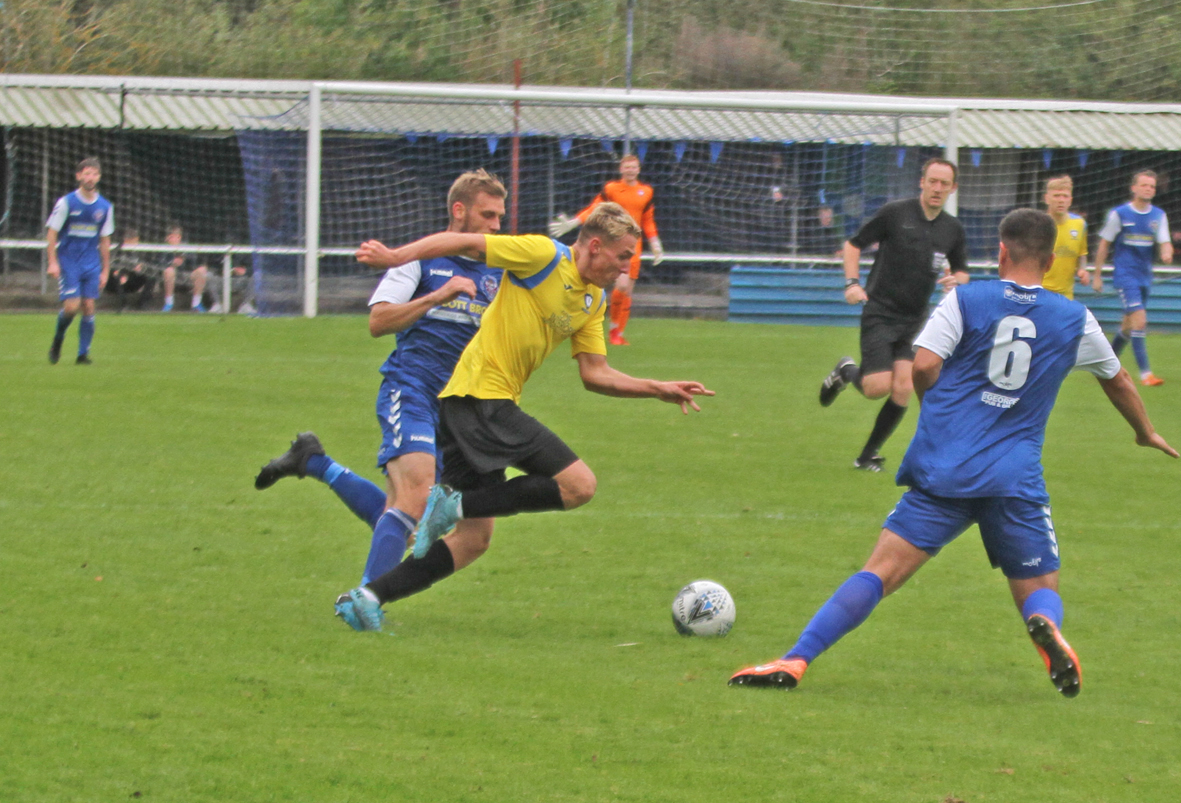 Whitley can count themselves very unfortunate not to have come away with at least a point after a spirited performance in a closely fought game at third top Thornaby.

In a much changed side, Dan Lister, Scott Lowery and Henry Dorward all returned to the starting eleven while there were debuts for Tom Smith, David Parker and Michael Speed.

It was Thornaby who created the first chance of the game inside two minutes and Lister had to be alert to push a powerful header from Kenney over the bar.

On the quarter hour, Dorward’s free kick from out on the right flew narrowly wide of the far post but it was the Teessiders who went close to making the breakthrough in the 24th minute when a free kick clipped the top of the bar.

The game was beginning to open up and two minutes later Mitchell Ramsay found space on the left but he could not get his shot on target. With half an hour played, Ramsay supplied a dangerous cross into the box which keeper Mafzari dived to gather just ahead of the onrushing Adam Shanks. In an accidental clash, the keeper suffered a head injury and after lengthy treatment was unable to continue and was helped from the pitch.

The restart from substitute keeper Hunt seemed to catch the Bay defence off guard and his long kick was cleverly flicked on by Hutchinson to Beddow inside the Whitley box. The prolific striker took the ball across goal before slotting it back across Lister into the net for a well taken goal.

Whitley fought back and after Michael Speed had an effort saved, Gavin Dick tried his luck with a long range shot which was just too high. Just before the interval, Whitley very nearly drew level when David Parker struck a great volley from the edge of the box and the ball crashed off the underside of the bar and rebounded down onto the goal line before being cleared. There were claims that the ball had crossed the line but play was allowed to continue.

The second half started with Whitley pressing forward and Dorward’s corner was headed over the bar by Scott Lowery. Dorward, who had scored on both of his two previous starts, nearly maintained his excellent record with a powerful drive that Hunt did well to push wide.

Thornaby were making little impression on a resolute bay defence but just before the hour mark, Hutchinson got a shot on target but was denied by Lister.

Richard Coulson, playing well in a unfamiliar centre back role, picked up a knee injury and despite attempting to continue, was obviously struggling and had to be replaced by Khalid Kharufa.

Midway through the half, Ramsay had a great chance to level the score but he directed a header from Shanks over the bar with Hunt beaten. Four minutes later Shanks a sent a glancing header wide as Whitley kept up the pressure. Fresh legs from the Weirs brothers who came on as second half substitutes, brought renewed energy to the Bay midfield and a cross from the left almost brought an equaliser from Shanks but he could not get his header on target. Whitley were quicker to the ball and denying the home side time or space leaving Lister relatively untroubled for much of the half.

Ramsay, who continually threatened the Thornaby defence, rippled the side netting with a shot from the left and Shanks again went close to earning a point in the closing stages but it was not to be. Thornaby and their fans knew they had been in a tough game and were clearly relieved to hear the final whistle. Whitley, whose newcomers all contributed well, created enough chances to have won the game and could have done just that with a little more luck in front of goal.