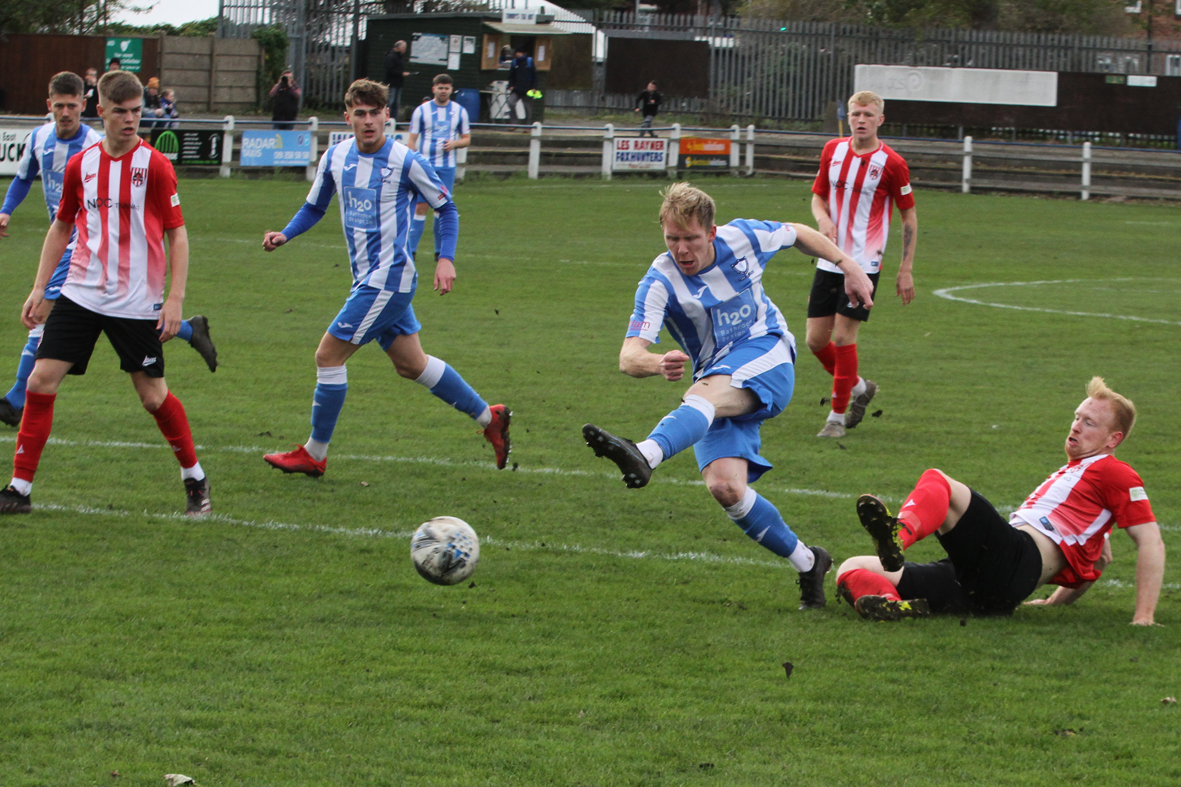 Goals from Adam Shanks and Scott Lowery gave Whitley an important three points after a hard fought game against Guisborough. Derek Forrest handed a debut to new signing defender Elliot Watson, and with captain Craig McFarlane injured, Aidan McGee made his first start for the club.

After a fairly even opening period, the visitors went close in the 13th minute when Steven Roberts played the ball through to Johnson whose shot went narrowly beyond the far post and out of play. At the other end in a Bay attack, it took a fine fingertip save from Robert Dean to push the ball onto the bar before it was knocked just wide.

Midway through the half, Guisborough suffered a blow when Roberts had to be helped off the pitch after suffering a nasty injury. Within a minute Whitley took the lead when a shot from Richard Coulson crashed off the post with Dean beaten and the ball rebounded into the path of Adam Shanks who smashed it into the net from 15 yards.

The goal did not deter the Priorymen who continued to pose a threat and on the half hour they went close when Ben Jackson cut in and his low shot was kept out by the feet of Dan Lister. Another attempt on goal came six minutes later but this time Jackson drove the ball into the side netting.

Just before the interval, a timely tackle by Scott Lowery inside the box prevented Bartliff going clear on goal and so Whitley retained their narrow lead at the break.

Less than two minutes into the second half Guisborough were back in the game when referee Darren Williams spotted a trip on Beauchamp by Jamie Dunn inside the box and the visitors were awarded a penalty. Lister went the right way but Bartliff struck his spot kick beyond the keeper into the net to level the score. The goal gave the Yorkshiremen a boost and two minutes later Beauchamp went close to giving his side the lead but his shot was just off target. Whitley were coming under pressure at this stage but in contrast to last week’s game at West Auckland, they held firm and two substitutions midway through the half contributed to them gaining more of a grip in midfield. Striker Jamie Clark, signed on loan from Blyth Spartans just hours before kick off, made a good impression as Whitley pushed forward in search of a winner. Lewis Orrell was played clear on goal with 17 minutes remaining and it took a fine save from Dean to push his shot wide. Increasing the pressure, Whitley forced a corner on the left and when the ball was played into the near post, Dean made a rare error, failing to hold the ball and Scott Lowery pounced to fire it into the net from close range.

The final stages saw Whitley hold out comfortably, with disciplined defending keeping the visitors limited to attempts from distance which failed to trouble Lister.

While the game had not matched the high quality of the previous home game against Consett, it was good performance and the crowd of just under 400 fans gave the players a rousing reception on the final whistle.

Man of the match: Scott Lowery