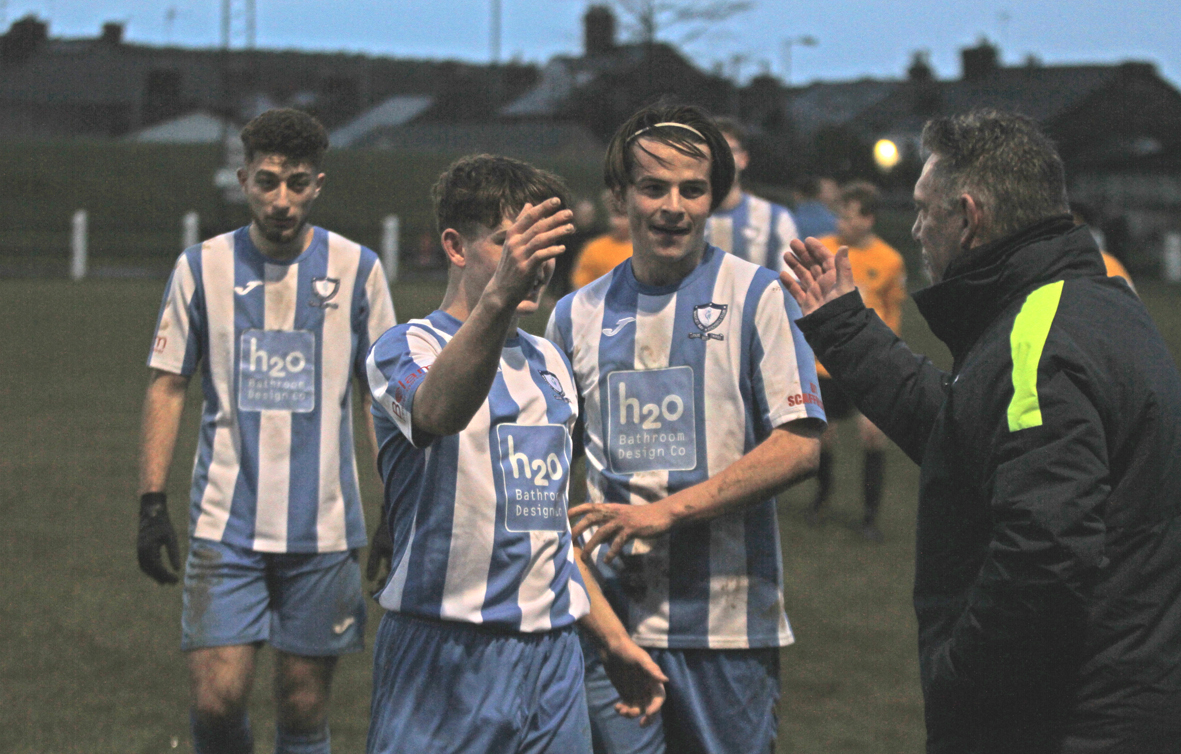 There was a relieved smile on the face of Bay manager Nick Gray when he spoke after watching his new side score twice in the last two minutes to come from a goal down to win 2-1 at Crook. “I’m delighted for everyone in the changing rooms, the supporters, everyone really, but especially the lads in the changing rooms. Since I’ve come in they’ve given their all in training and they’ve stuck together. I said to them we just need to find ways of winning games, it doesn’t matter how we play but it’s the result that matters. Today it wasn’t pretty at times but we kept on going. The first half I thought we were a bit lack lustre, with the formation we were a little bit apprehensive going forward, a bit scared and obviously we were a goal down at half time. But we tweeked it and second half I thought the lads came out and gave us a good show of it. There are still things to work on but there’s nothing better than getting a winner with a minute to go!”

Looking back on the dramatic conclusion to the game he explained “The only reason our first one was an own goal was because Bailey’s put a great ball into a dangerous area, the defender’s stretched and had to commit himself.. but they all count! Then with only a minute left you think do we stick or twist? Are you happy with the point to stop the rot? But we kept at it and to be fair I’m delighted for the little man scoring the winner. He’s only 16 years old and he’s made a difference when he’s come on. The ball came in from the right, it was ‘Dipps’ (Shaun Dippenaar) who put it in and Bailey’s got across the defender and he stuck his foot out and put in from in front of the keeper. I work with young Bailey every day, and he’s always got a smile on his face, a joy to work with. The lad had played a game last night as well. He’s a dream! You’re in football for people like him and when you can see how happy he is in there just now, it makes it all worthwhile.

“It’s three points which makes it a bit healthier. There’s still a lot of work to do here yet but the lads are buying into things that we want. It’s a relief tonight, that’s the word I would say; there’s a lot of hard work but today’s result is for all the lads in the dressing room.

“It’s a massively important win. It’s done a lot for confidence today. The down side though is Matty Coaley had come off and might have done something to his knee. Hopefully it isn’t as bad as it looks. You don’t like to see anyone get injured.

“You’ve got to take your highs and today’s a high. It’s a win, it’s three points but you’re in football to win games and we’ve got to enjoy it tonight. It’s great for the supporters who came here today. I’m pleased for them, they stuck with us to the end and I’m happy for all of us tonight. Yes, it’ll be a good journey home!”