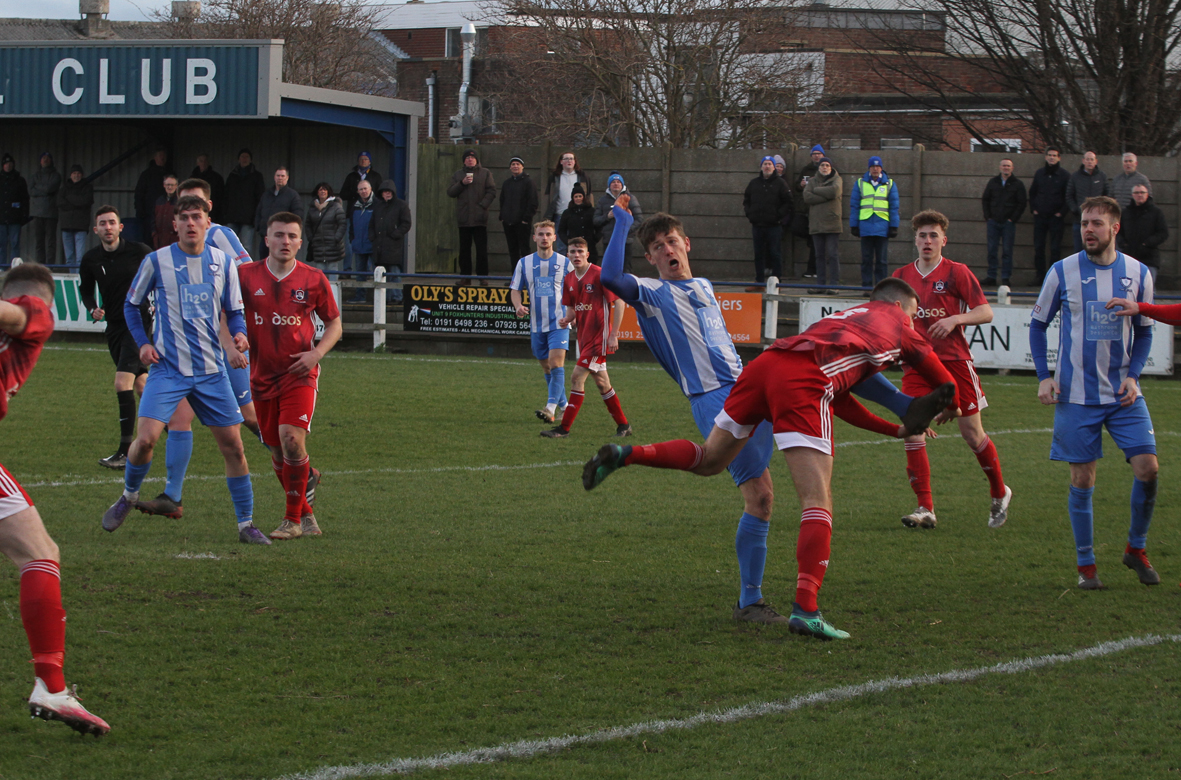 High flying Newton Aycliffe deservedly came out on top on a blustery afternoon at Hillheads. Making light of the tricky conditions, the visitors played some fast, incisive football which kept Whitley on the defensive for much of the game.

Adam Shanks made a welcome return to the Bay side following an injury which had kept him out of action since the turn of the year. However Malcolm Morien and Matthew Coaley had both picked up injuries in recent games so Bailey Geliher, who got the winning goal at Crook seven days earlier, made his full debut.

The confidence Whitley had gained in that victory soon suffered a knock as Aycliffe took the lead after just six minutes when John Howard sent a header into the path of striker Liam Jarvie who drove the ball beyond Dan Lister.

Whitley nearly drew level four minutes later when Adam Shanks broke through on the left and curled a great 20 yard shot towards the top corner of the goal only for keeper Adam Pickford to pull off a tremendous save, pushing the ball just over the bar.

Eleven minutes later the Aycliffe keeper was in action once again, this time to push a deflected shot from Lewis Orrell wide of the goal.

At this stage of the game, the wind was largely in Whitley’s favour, blowing diagonally across the pitch but the elements worked against them in the 26th minute when Shanks beat Pickford to a through ball but the wind blew it out of play.

At the other end former Bay defender Callum Munro drilled a low ball into the box but it was put behind for a corner. Shortly afterwards, Whitley were slow to react when they conceded a foul 20 yards from goal on the left of their box. Quick thinking by Aycliffe caught them out as Wood’s free kick went straight through to Ben Reay who slotted the ball under Lister to put the visitors 2-0 ahead.

They might have added a third eight minutes before the interval when Coleby Shepherd, who had a short loan spell at Hillheads two years ago and is now at Aycliffe on similar terms, fired in a great 25 yard shot that flew just over Lister’s bar.

At the break Whitley replaced Bailey Geliher with another youngster Oliver Cresdee as they sought to find a way back into the game. Eight minutes into the half, Kevin Mirzakhanian cut infield from the right taking the ball across the edge of the box before unleashing a great shot that whistled inches wide of the far post. A goal at this stage would have given Whitley a chance of rescuing a point but those hopes were dashed two minutes later when Wood played a free kick for Aycliffe across the Whitley box where Marc Costello rose unchallenged to head home and put the visitors in complete control.

Three minutes later it took a brave block by Lister at his near post to thwart the impressive County Durham side.

Whitley were now a beaten side and the game petered out with Aycliffe happy to retain their lead which saw them climb to third in the table.