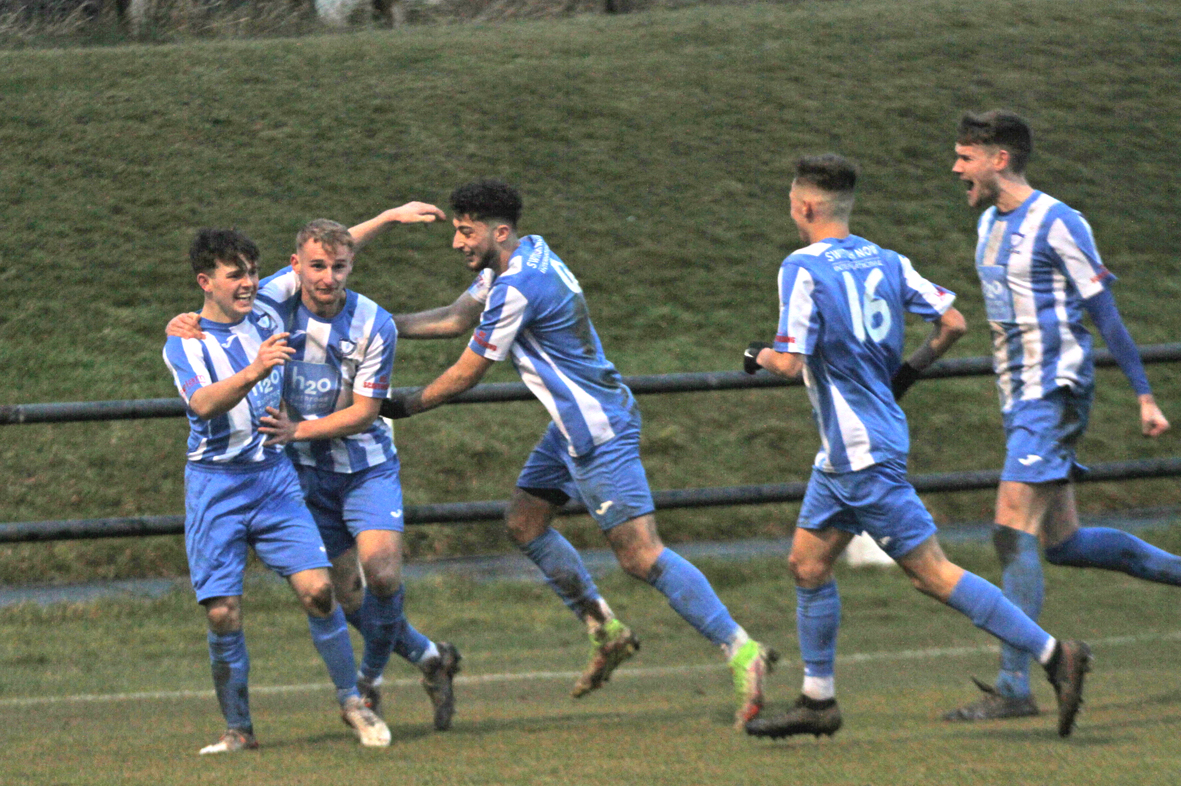 This was a game of late drama as two goals in the last two minutes gave Whitley their first victory under new manager Nick Gray on a wet and blustery afternoon at Crook.

It seemed that a goal scored just before the interval was going to be enough to secure the points for the hosts but with time running out, Bay substitute Bailey Geliher set up the equaliser before grabbing the winner in the 90th minute.

Crook had the better of a rather scrappy first half when the crosswind caused problems for both sides. Whitley’s best chance came after 11 minutes when a good build up culminated in Matthew Coaley striking a powerful shot that took keeper Ronan Makepeace by surprise as it crashed off the top of the bar. The home side were having more of the ball but created few attempts on goal, a rare effort just before the half hour flashing past the post. Six minutes later they got a shot on goal but it was directed straight at Dan Lister who saved comfortably. At the other end, a free kick 20 yards from goal by Josh Gilchrist was deflected narrowly wide.

The deadlock was broken three minutes before the interval when a well placed pass down the Crook left cut through the Bay defence to striker Eddie Thomas. Advancing on goal, his first attempt was kept out by Lister who got a hand to the ball, but Thomas regained possession and slotted it into the far corner of the net to give the County Durham side the lead which they retained to the interval.

On the resumption, Jack Beverley was replaced by 16 year old Morpeth Academy student Bailey Geliher and it was a move that was to have a crucial impact on the game. Whitley looked more lively and within six minutes created a good opportunity. A foul on Mirzakhanian brought a free kick in a central position barely 20 yards from goal but Gilchrist’s shot was headed clear. Midway through the half, newly signed Oliver Cressdee came off the bench for his debut in place of Callum Anderson but five minutes later, Crook went close to extending their lead when a shot hit the bar and flew high in the air before being cleared from the goal line.

Play was held up when Coaley sustained what looked to be a nasty knee injury and had to be helped off the pitch, Tom Smith taking his place for the final 20 minutes.

Ten minutes from time, Crook goalscorer Thomas was sent off following a bad tackle from behind which brought down Harry Yoxall as the young defender was about to break away downfield. It looked as if Yoxall might be unable to continue but with all three substitutions made, he recovered sufficiently to stay on the pitch.

With the home side down to ten men and appearing to be tiring, Whitley could see their opportunity and pushed forward with greater effectiveness. Mirzakhanian had a shot blocked but fumbled by the keeper before the ball was scrambled clear, then with just over two minutes remaining, Geliher drove a low ball across the Crook goalmouth from out on the right. In a desperate effort to knock it out of play, Crook skipper Jordan Fielding succeeded only in putting the ball past Makepeace into his own net to level the score. It looked as if Whitley had secured a point but not content to play out the remainder of the game, they pushed forward again and with the game about to enter stoppage time, Shaun Dippenaar crossed from the right, and Geliher got in beyond the Crook defence and flicked the ball past Makepeace from six yards to put Whitley in front, sparking joyous scenes both on and off the pitch. However the game was not yet won and two minutes into added time, Crook won a corner on the right and when the ball was played in to the goalmouth it took courageous defending to keep it out. The final whistle was not long delayed and the celebrations that followed were not only an indication of the delight that Nick Gray had secured his first win as Bay manager but relief that a winless run stretching back to November had finally ended.

*Geliher, at 16 years 7 months, may have put himself in to the record books as one of the youngest goalscorers in the club’s history and his contribution to this game certainly put the smiles back on the faces of the Bay fans who braved the elements to witness the game.