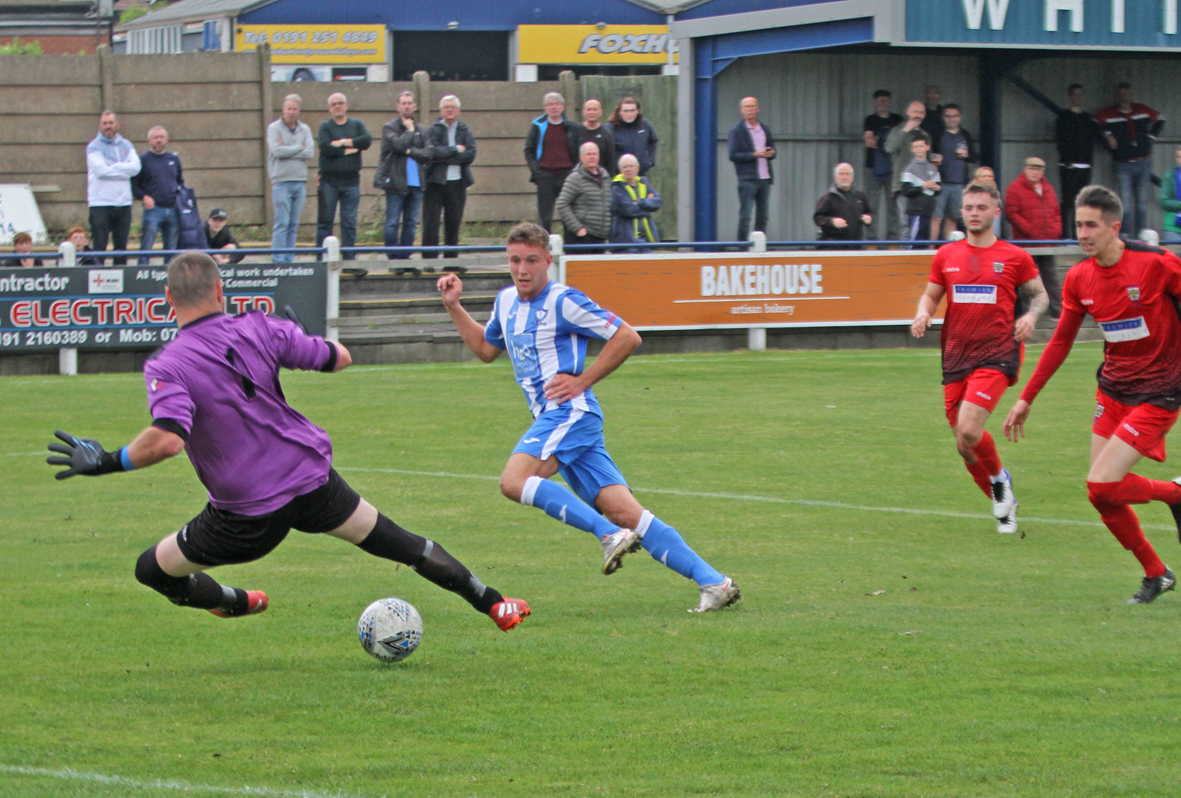 Despite seeing his side suffer a narrow 3-2 defeat at home to league leaders Consett, Bay manager Derek Forrest was thrilled with the performance in front of a huge crowd at Hillheads.

“What a game it was! It started straight away with the penalty and the excitement continued all the way through. It was hard to keep up with the game - we had five chances by half time so on a good day, if just half of them fly in we could be maybe 3-1 up. Dan (Lister) has made some great saves, they were making it difficult for us with some deep runs and we were talking about that at half time, but yes, it was a fantastic game of football!

“Consett are a team who are top of the league, with good players, they’re a good oufit, so to have them really opened up was really pleasing. The last time played them, we created chances but this was something better, we had more of a cutting edge this time so to have Consett under pressure and worried about us was really good, but at the same time, because it was so open it we were leaving ourselves open at the back, that’s how it was. We went from last week’s game when there was just one goal to one that could have been 4-4 at half time!”

Commenting on the impact of the three new players who made their debuts last week he added, “There were some good performances, in midfield there was a lot of energy, good passing, good combination play. We’re still working on things defensively, we need to be defending as a team, it’s not just the defenders or midfield players. We know it can get better so overall it’s good.”

Dan Lister pulled off a series of excellent saves in the first half to keep Whitley in the game and he came in for special praise. “It was a fantastic performance by Dan, the ownership he’s taken on board, Phil Hogg, goalkeeping coach is working with him which is a great help. Saving the penalty so early was a great foundation, and then we go up and score and you start thinking ‘is this the one that’s going to be our day?’

“I think when people have played like that first half you ask the question, can they keep doing this, and the answer was no, they couldn’t. They weren’t so much of a threat and we pushed and pushed and had people on the back foot, we created some key chances. It was a real shame that we conceded. The goal we conceded was after we’d cleared off the line and it rebounded back into the net which was unfortunate.

“All you can ask for is a lot of hard work, a lot of discipline and if you get a performance every week you just hope you get your little slice of luck. The luck did seem to change a bit. We got a performance again, that’s two performances in a row in a different spectrum, and although we lost, both they were very close, this one could have finished 5-5 and last week we could have had a 2-1 victory, so we’ll look for the same attitude next week and hope for a different result.”

The crowd of 637 was the biggest of the season in the Northern League and Forrest was delighted to see such tremendous support. “They’ve seen a great game of football, it was fabulous, the fans were wonderful, they’ve enjoyed it and we can only be thankful that so many people have witnessed that game of football because what a performance it was from minute one right through to the 94th minute. There was always something happening in the game. As a manager I wouldn’t have minded an occasional dull moment, it doesn’t help your blood pressure as a manager! But that’s what you’re in football for. We’ve just got to turn these performances into wins now.”