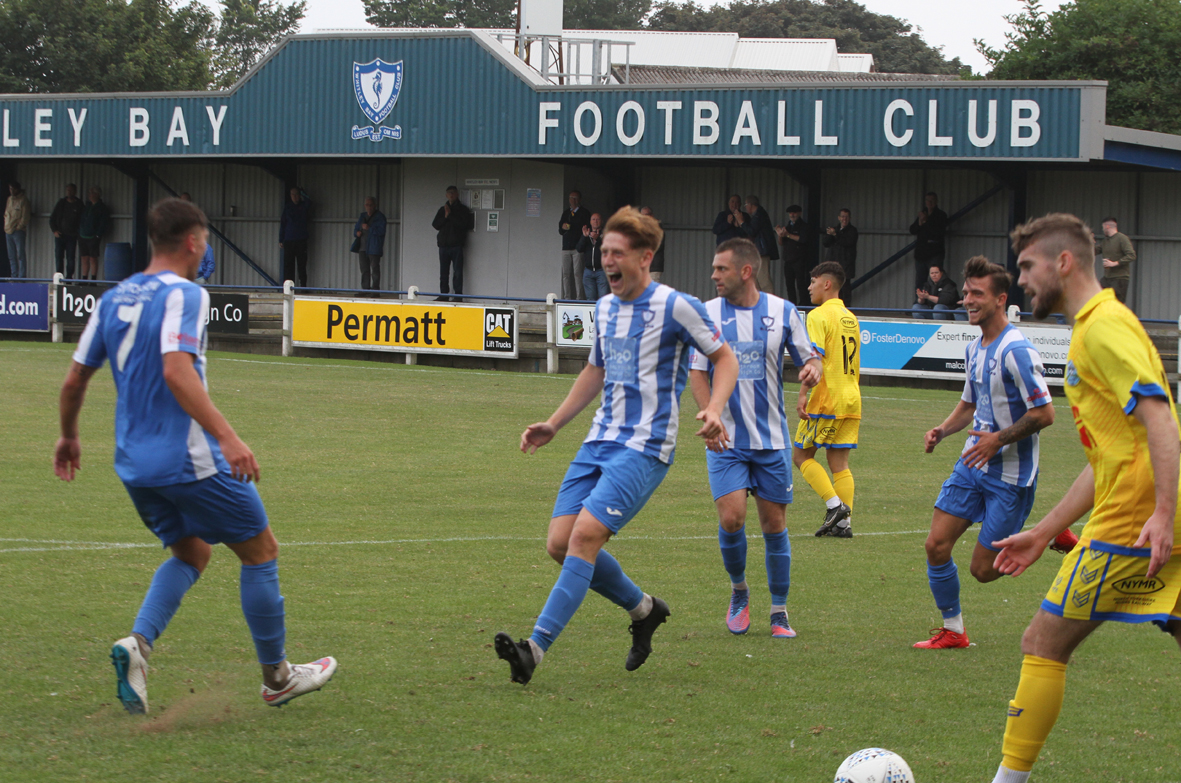 Whitley are top of the league after cruising to victory over managerless Pickering Town at Hillheads. The result was never really in doubt after they scored twice in as many minutes before the midway point of the first half. Another goal rush came shortly before the hour mark with three coming in rapid succession as the Northern League’s newcomers, relegated from the Northern Premier League last season, were outclassed by a Bay side growing in confidence with every game of a winning run which now extends to six victories.

After a fairly quiet opening period, Whitley went close to opening the scoring in the 14th minute when Sam Irons raced in at the back post and stooped to head goalwards but could only direct his effort wide of the upright.

Two minutes later Pickering were penalised for a foul five yards outside the right edge of the box and when Nathan Dyer kicked the ball away, he was cautioned for his petulance.

The resultant free kick was cleared only as far as Lewis Orrell who drilled it back into the far corner of the net to put Whitley in front. Less than two minutes later the lead was doubled when Luke Porritt crashed home a ball played in from the right. The visitors looked shell shocked and it took them a further ten minutes to mount any real challenge on the Whitley goal and that came to nothing when a free kick from out on the left was played over the bar with Lister untroubled.

On the half hour there was a delay when Irons went down injured and required lengthy treatment before continuing. Scott Lowery almost made it 3-0 in the 35th minute with a header that beat keeper Jack Norton but was cleared off the line by Tom Goddin.

Shortly before the interval, Josh Gilchrist, playing as a striker, twice went close. Firstly he headed narrowly wide after good work by the impressive Harvey Neary and then his header hit the top of the bar with Pickering struggling to contain him.

After the interval, Whitley brought on Oliver Cresdee in place of Irons, whose injury forced him out of the game. Four minutes after the resumption, a fierce shot from Orrell flew inches over the bar after taking a touch off a Pickering player, but the corner was cleared. Whitley continued well on top and were denied what appeared an obvious penalty when Elliott Day was pushed down in the box. However justice appeared to have been done barely 20 seconds later when Day having just picked himself up was perfectly placed to lash home a cross from Cresdee. Two minutes later a calamitous error by Norton, trying to dribble the ball clear, gifted Whitley their fourth goal. Gilchrist closed in on the keeper, putting him under pressure, and despite having slipped to the ground, poked the ball from Norton’s feet before knocking it into an empty net.

The cheers had barely died down before Whitley added their fifth goal, their third in little more than four minutes. Regaining possession almost from the restart, they cut through a mesmerised Town defence and Gilchrist crossed from the right to Orrell whose shot from the edge of the box arrowed into the bottom corner of the net.

With the game won, Nick Gray took the opportunity to make use of all of his substitutes and give other players a well deserved breather ahead of a hectic spell of games.

Cresdee and Orrell both went close to extending the lead while Malcolm Morien had a shot deflected wide of the target after good play by Cresdee.

With news coming through that previous leaders Newton Aycliffe had been beaten, Whitley were able to celebrate not just a convincing sixth consecutive victory and another clean sheet, but also taking over at the top of the table. While obviously delighted with his team’s run of good form, manager Nick Gray was certainly not getting carried away and was quick to point out that there are some tough games coming up with trips to two of the top sides, Carlisle City and Guisborough Town in the next seven days.

Man of the match: Lewis Orrell