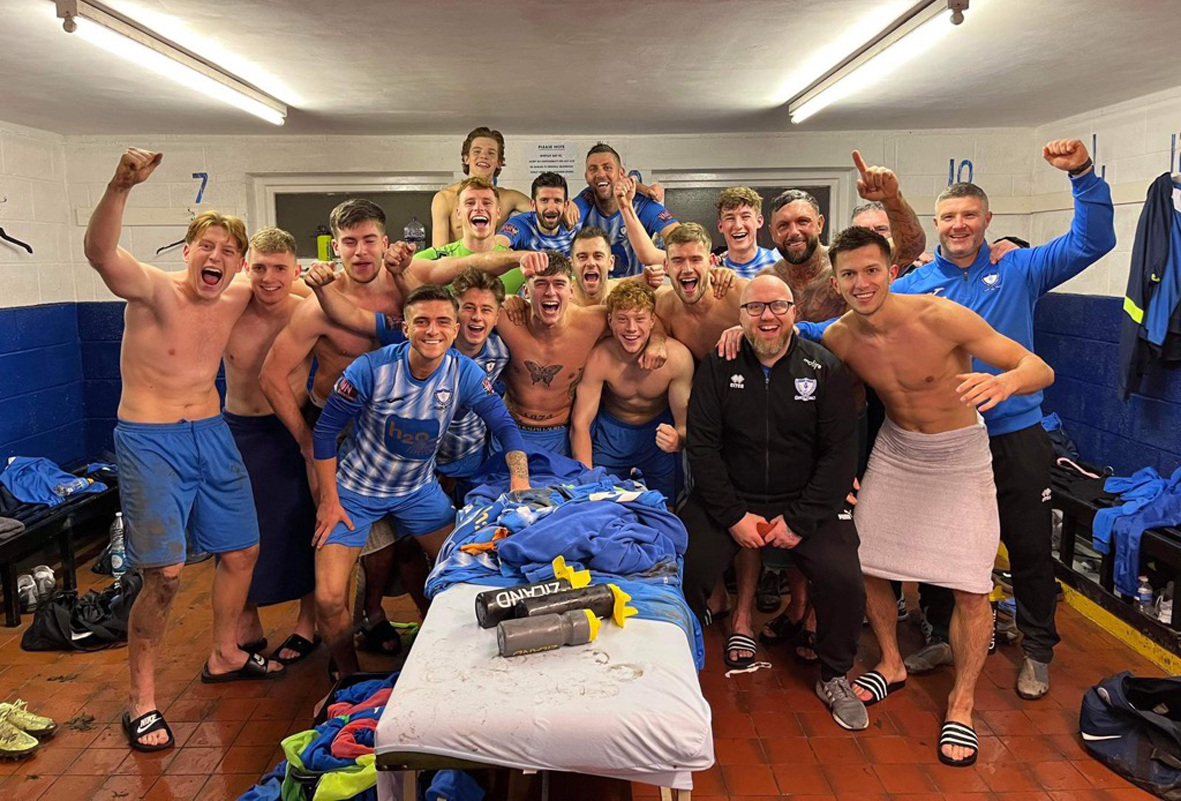 It was a very happy Nick Gray who emerged from the Bay dressing room following his side’s victory over the full time professionals of Newcastle United U21s, a win that earned them a place in the semi finals of the Northumberland Senior Cup.

“Yes I’m delighted for the lads regardless of the result. I thought they gave everything. They left everything on the pitch. We got the win which I think we deserved over the 90 minutes. We were playing a full time outfit, but they’re young lads and they won’t be used to these surroundings so I think they probably felt like it’s something new to them and they’d be thinking what’s the pitch going to be like. So I thought we had to start on the front foot and yes, we did. We started strongly. We didn’t give them any time on the ball. I thought we pressed them really well and they knew they were in a game. At half time I was really happy. I said ‘we’re going to tire; they are going to have spells. We’ve just got to game manage it’. I knew we’d have to use subs which we did. Yes I think they were in a little bit of shock in the first half and maybe we could have scored more than two by half time.

“They don’t obviously know a lot about us. We actually know a lot about them. They’re a team who train full time. I thought we were the better side in the first half and came in deservedly 2-0 up at half time. I class our lads as being fit, and then you look at Lewis Orrell cramping, Harvey Neary cramping up, Ben Richardson cramping up, Andrei tiring. That shows how much effort they’ve put into the game because in the standard we play at, they’re fine for the full 90 minutes. We hung in, dug in and we were a bit lucky near the end but then we’ve come up with a wonder goal from Malky at the end to seal the win, which the lads were all delighted about and thoroughly deserved.” He added that the Newcastle Under 21's team manager Elliott Dickman along with Steve Harper had come to the dressing room after the game to congratulate Whitley on their victory, a gesture which was really appreciated.

Speaking of the need to use all five substitutes he was full of praise for substitute goalkeeper Dan Lister who went on as an outfield player near the end of the game. “Dan Lister has been great for this club. His commitment and character and attitude are fantastic. He’s a very good goalkeeper who’s getting challenged for the first time since I’ve been here. He’s rising to it (the challenge) and I knew he would. I think we’re fortunate to have two very good young goalkeepers and for him to go on there and do a job for us. I didn’t expect anything else from him. Some players might have thought ‘what me going on there?’ Not Dan, he went on there and he worked hard, so that just typifies the type of person he is, a fantastic attitude and a great kid.”

He felt it was too early to think very much about the semi finals. “The other three games haven’t been played yet and the semi finals won’t be until January or February, so we’ll enjoy tonight, we’ll recharge our batteries and then we’ll go back to the league action on Saturday (at West Allotment) which we know will be a tough game on a probably a similar pitch to what we’ve played on tonight.”

Discussing team selection he continued “I knew Newcastle had a game on Monday night so I thought should we give our youth a chance, change it up a bit, because it was a free hit for us tonight?  I’m really confident with all the players we’ve got here, but then Turnbull wasn’t available, Taylor’s not available, Porritt became unavailable today so that made my decision for me. I thought we’ll go for the young lads and their average age was probably about 19 or 20, not much different from them, but with a bit more experience and they gave everything. It shows just how confident I am in the squad. That won’t be the same team on Saturday and I told them that before the game. One thing I can say about this squad is there’s great togetherness in there. We’re on a great run, unbeaten in 90 minutes for a long, long time and we’re going the right way and learning together. We’re not going to be able to do things with 11 or 12 players and tonight typified that, having five subs with a goalkeeper going on outfield at the end of the game to see us through and that just typifies the whole group for me.”