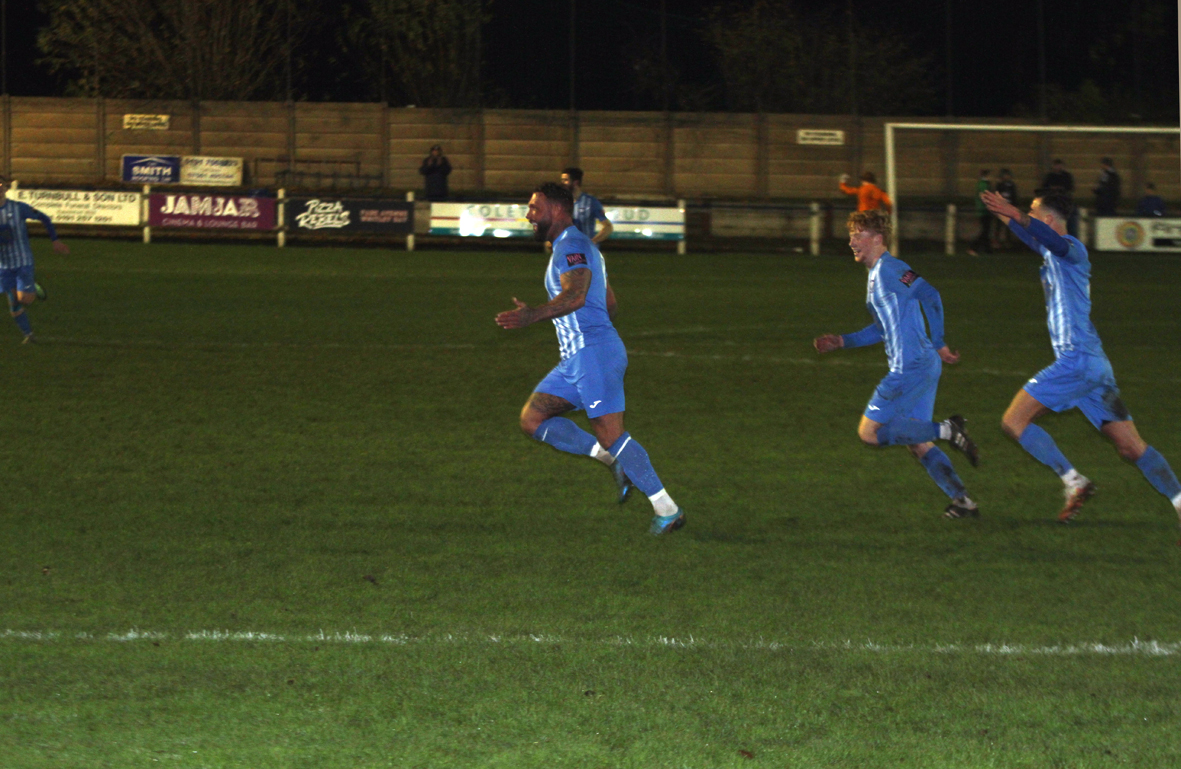 A tremendous all round performance earned Whitley a well deserved victory over Newcastle’s Under 21 side on a memorable night at Hillheads.

With half of their youthful starting eleven also under 21, Whitley began much the better of the two sides.

An early effort from Cameron Brewis was comfortably saved by Max Thompson and seven minutes later the Newcastle keeper was called upon again to save from Harvey Neary. Keeping up the pressure, Whitley went close again just past the quarter hour but Thompson punched clear a shot on goal from Josh Gilchrist.

At the other end a crucial clearance by the alert Bay defence denied the visitors when the ball was played into the goalmouth.

The opening goal came shortly afterwards, with 20 minutes on the clock. Ben Richardson’s left wing corner was headed clear by the Newcastle defence but only as far as Lewis Orrell who from just outside the right edge box drilled in a low shot which arrowed into the far corner of the net with Thompson seemingly unsighted.

The lead was no more than Whitley deserved and it might have got even better for them three minutes later but a cross from Neary went inches beyond the far post.

After a slow and hesitant start, Newcastle began to force their way into the game and only a great diving save from Pat Nash kept out a strong shot from Diallo. Moments later Nash used his feet to block another effort on goal. Visibly growing in confidence Newcastle were pushing for an equaliser but they were stunned just past the half hour when Whitley doubled their lead. A good build up on the right of midfield saw Neary receive the ball before weaving his way past two defenders to get a sight of goal. His powerful curling shot into the goalmouth was palmed away by Thompson but only into the path of Andrei Ardelean who chested the ball home from three yards out for his first goal since returning to Whitley Bay last month.

Two goals up, Whitley now looked in control of proceedings and comfortably retained their advantage for the remainder of the half.

After the interval, chances were fewer and Newcastle gradually gained a greater share of the possession with more of the game played in the Bay half. The speed and fitness of the full time professionals began to show, especially after they had made two early substitutions, bringing on Dylan Stephenson and Jay Turner-Cooke.

They eventually pulled a goal back with 72 minutes gone, when a low ball into the box from the right by Diallo was not held by Nash as he dived across his six yard box and when the ball ran loose, Michael Ndiweni had a simple tap in to bring his side back into the game.

Whitley made a series of substitutions in an effort to hold off the expected onslaught from the visitors. A free kick 25 yards out failed to trouble Nash with a shot flying high over the bar.

Then in the last minute of the ninety, with Newcastle pushing forward in search of an equaliser, Richardson won the ball in midfield and when he played it forward, substitute Joe Groves-Forbes knocked it through to fellow sub Malcolm Morien. The experienced striker broke clear and from fully 25 yards, with Thompson advancing from his line, Morien sent the crowd into raptures as he fired a tremendous shot over the keeper and just under the bar in the top right corner.

There was no way back now for Newcastle and with Richardson tiring after putting in a tremendous shift, Whitley made a final and rather unorthodox change, bringing on substitute keeper Dan Lister as an onfield player for the five minutes of added time. The move proved effective with Lister playing a forward role and helping to keep the ball in the United half as Whitley saw out the remainder of the game.

The final whistle was greeted with exuberant celebrations on and off the pitch as home fans in the bumper crowd looked forward to a semi final tie in the new year.