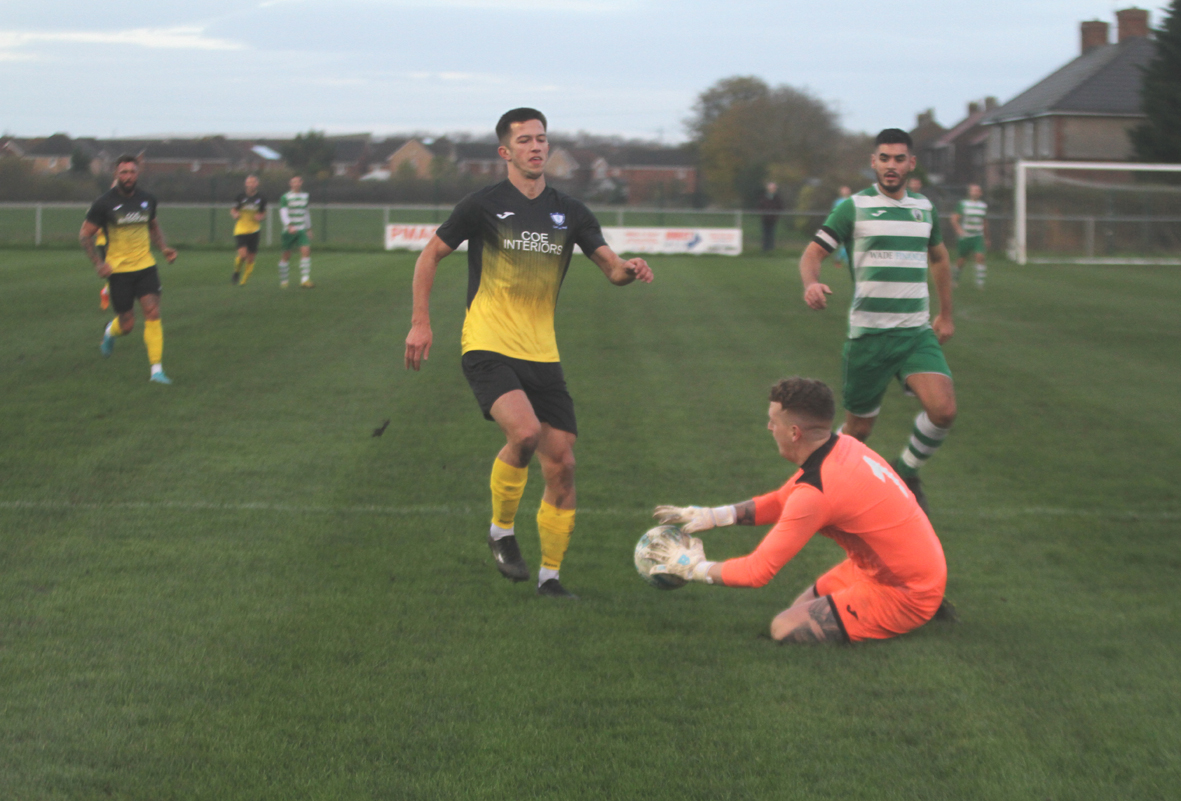 Whitley’s long unbeaten run came to an end in the most dramatic and unexpected fashion as West Allotment scored four goals in an incredible eight minute spell just after half time at East Palmersville.

Whitley were a goal down at the interval but had arguably been the better side in the first half and no one could have predicted what was to follow.

A heavy pitch and a strong and blustery wind made conditions difficult and it was Whitley who looked the more composed side in the early stages. With 13 minutes played, Andrei Ardelean chased a long ball forward but was just beaten to it by ex Bay keeper Dan Gladstone. Two minutes later the home side took the lead with their first attempt on goal. The referee played advantage after an infringement had been signalled by the assistant leaving Scott McCarthy to close in on goal and poke the ball past Dan Lister and into the net despite the efforts of Michael Hall to recover and keep it out.

A good four man move three minutes later ended with Morien playing a first time ball to Ardelean inside the box but he could not get his shot on target and the ball flew wide of goal.

Whitley’s best attempt of the half came in the 26th minute, Lewis Orrell forcing Gladstone into a fingertip save to push his powerful shot over the bar.

Whitley continued to search for the equaliser and on the half hour, Elliott Day got in a shot which was knocked over the bar by a defender.

Day was prominent with attacking moves down the left flank and on the stroke of half time he tried his luck again but his attempt was too high to trouble Gladstone.

Immediately after the restart, Whitley might have drawn level and once again Day was involved. His cross from the left took a slight deflection off a defender and flew into the goalmouth where Ardelean could not get a clean connection and scooped the ball over the bar from no more than three yards out.

Moments later, play swung to the other end where Larmouth was played through on goal. Lister came out to force him wide but the Allotment striker went to ground. Lister was adamant that he had made no contact with Larmouth but referee Tom Lishman awarded a penalty which Larmouth converted with a shot high into the roof of the net.

Three minutes later, Allotment won a corner on the left. When it was played into the box, substitute Thomas Kalthoeber, a former Bay reserves youngster, who was making his debut after signing from Ashington, sent a header just inside the back post to make it 3-0.

Almost immediately, Allotment went forward again and Larmouth drove in a shot which rebounded off the post right into the path of McCarthy who with Lister off balance, slotted the ball home for the fourth goal.

It seemed that Allotment could do no wrong and two minutes later they added a fifth goal when a cross from out on the left was met by a spectacular diving header from Mikel Thompson who sent the ball high into the net at the back post, giving Lister no chance.

Four goals in eight minutes had ended the game as a contest but a stunned Whitley battled back with a response just three minutes later, Harvey Neary crossing from the right into the goalmouth where Malcolm Morien was unchallenged as he headed home from close range.

Sam Irons then played the ball in from the right as Whitley attempted to reduce the deficit further but this time Morien’s shot was blocked.

Whitley then made four substitutions, bringing on fresh legs as the heavy and bobbly pitch took its toll.

With 20 minutes left, Adam Hutchinson powered a shot through a crowded defence but Gladstone got down to make the save. Within a minute, the hosts rubbed more salt into the Bay wounds. Larmouth drove a fierce shot at goal from the right of the box. The ball crashed off the post beating Lister’s dive but rebounded across goal where it fell perfectly for Conway to slot into the net.

There could have been a seventh for Allotment just before the final whistle but on this occasion the difficult playing surface came to Whitley’s aid as Conway ballooned his shot high over the bar with the goal at his mercy.

It was a dream 45 minutes for West Allotment when just about everything went right for them with some top quality goals. For Whitley the eight minutes blitz resulted in a first defeat since early August, and with Ashington also suffering just their second league defeat of the season, the main beneficiaries at the top of the table were leaders Bishop Auckland, whose game was called off.