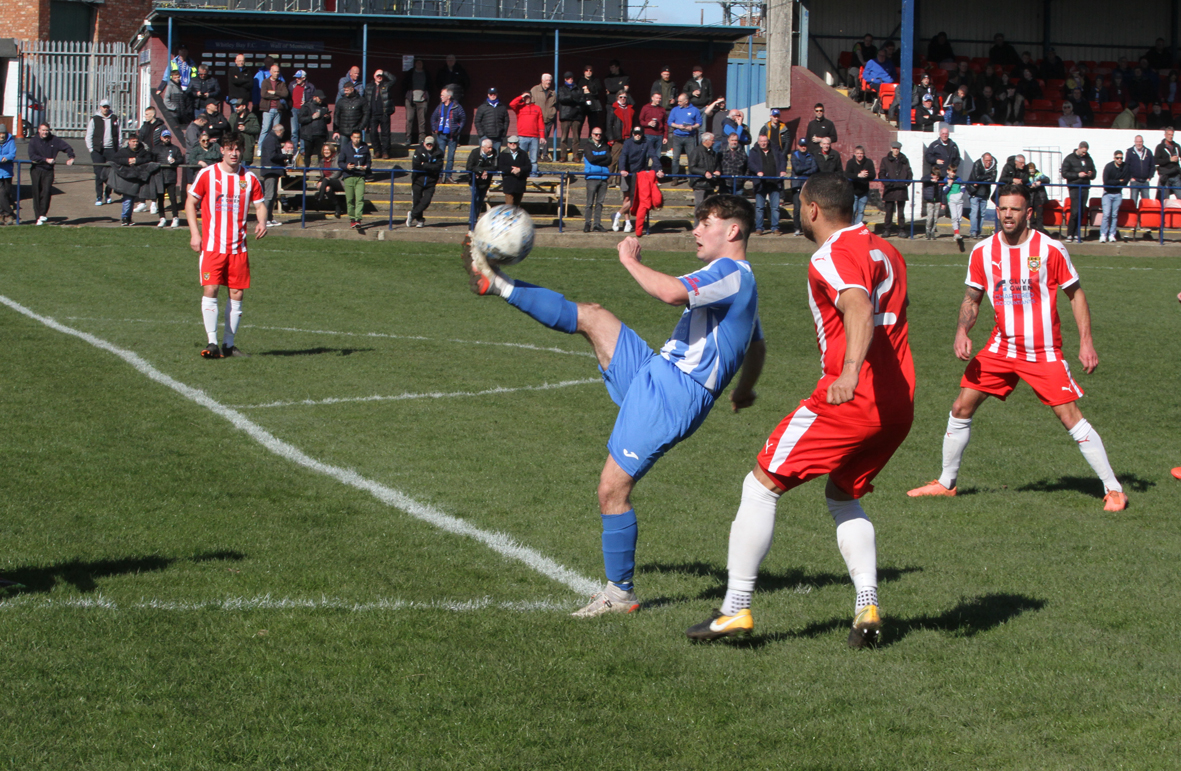 Whitley’s position in the Northern League First Division is becoming increasingly precarious after a heavy defeat by Ryhope CW, while all four teams below them in the table picked up points at the weekend.

They remain in 16th place but are now just four points ahead of second bottom Penrith who have one game in hand following their shock victory over leaders Consett. Billingham Town are relegated but one further team will go down, subject to FA confirmation when the season has been completed.

On a fine and sunny afternoon, Whitley began brightly and went close after eight minutes when Oliver Cresdee’s header from a cross towards the back post went over the bar. Four minutes later a free kick from 25 yards out by Malcolm Morien was saved by keeper Jordan Harkess.

Whitley have regularly conceded penalties this season and it happened again with 19 minutes played when Harry Yoxall brought down former Bay player Denver Morris in the box. James Ellis beat Dan Lister with the spot kick to give the visitors the lead.

Two minutes later an attempt from Morien was wide of the target but the goal seemed to have knocked the confidence out of the Whitley side and Ryhope were gaining the upper hand. Southern was not far off target with a low shot after a Ryhope corner then Lister had to race off his line to clear the ball from well outside the box when it was played through on the Ryhope left.

The visitors doubled their lead after 34 minutes when Ellis knocked home the rebound after Lister had saved his first shot on goal. The killer blow for Whitley came seconds before the half time whistle when instead of clearing the ball on the edge of their box, they lost possession giving Oscar Taylor a clear run on goal and he slotted past Lister to give Ryhope a virtually unassailable three goal interval lead.

Seven minutes after the restart, Whitley should have reduced the arrears when Bailey Geliher crossed the ball into the goalmouth and from inside the six yard box, Jackson Ward saw two attempts blocked before the ball fell for Cresdee whose shot flew past the far post.

Midway through the half Morien was caught just offside after being played through on goal then captain for the day Callum Anderson sent a header over the bar from a free kick.

Whitley did eventually pull a goal back in the 72nd minute when Geliher saw his shot parried by Harkess then reacted quickly to slot home the rebound from a narrow angle. It was a deserved reward for the 16 year old who provided the only bright moment of the afternoon for the home fans.

The youngster raced back to the centre spot with the ball clearly hoping that it was the start of a comeback for Whitley but despite his best efforts, it was not to be. Too frequently they gave the ball away, putting themselves under pressure and Ryhope soon restored their three goal lead when a free kick to the back post was headed home unchallenged by Danni Lay.