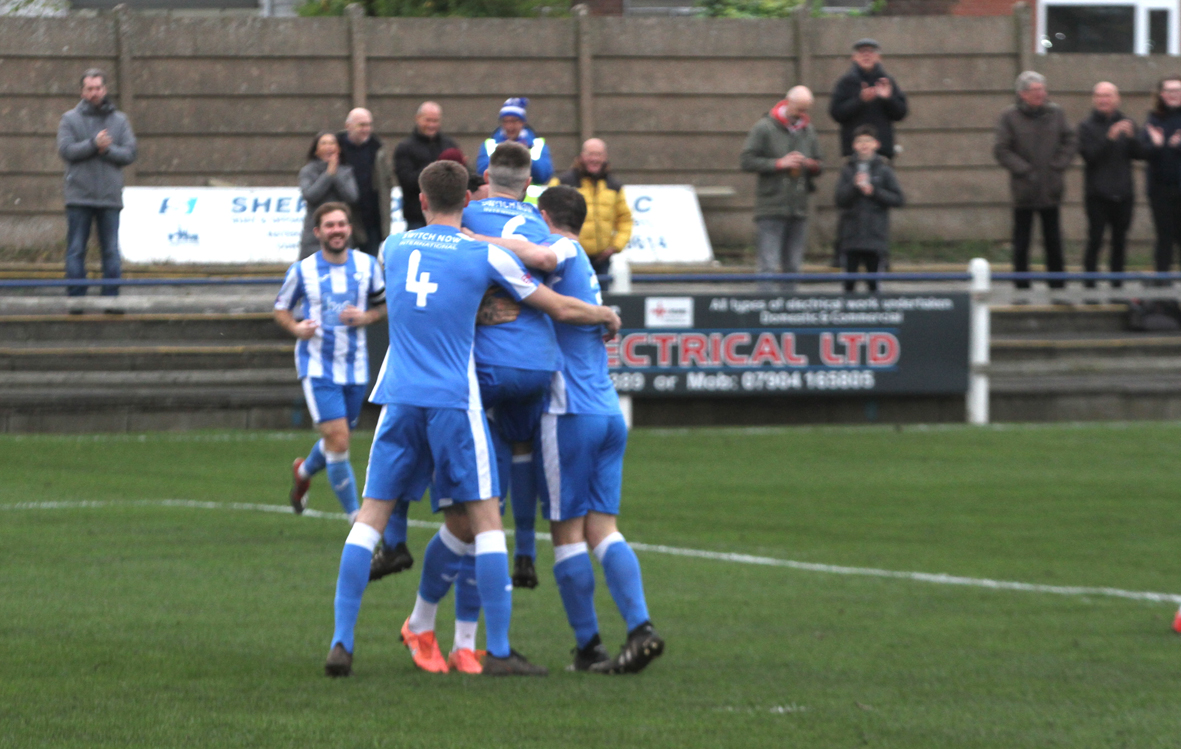 Whitley recorded their biggest league win of the season with a convincing victory over First Division newcomers Redcar Athletic in front of more than 500 fans at Hillheads.

This was the first ever game between the sides and it was preceded by a one minute silence to commemorate Remembrance Day.

Following two disappointing away defeats, Whitley looked determined to get back on track and they never allowed the visitors to settle, racing into a two goal lead inside the first seven minutes. With just 90 seconds on the clock, Whitley won a corner on the right and when the ball was played into the box, Luke Taylor drilled in a shot that hit the post and rebounded into the path of Callum Anderson who fired home to give Whitley the lead with what was a rare goal for the long serving defender, just his seventh in more than 360 appearances.

Five minutes later the Redcar defence was cut open again this time thanks to a spectacular and perfectly struck 25 yard shot from Gavin Dick which arrowed into the net leaving keeper James Dawson helpless. Having fallen two goals behind in their last two outings and then found it a struggle to get back in the game, the boot was on the other foot this time as Whitley were full of confidence and in complete control. Lewis Orrell had a shot saved then a shot cum cross from Craig McFarlane flew narrowly past the far post. On the half hour, Malcolm Morien, signed 24 hours earlier, hit the bar after good approach work from McFarlane.

Redcar then created their first opening of the game when Isaac Walker volleyed an effort wide of the target. An excellent foraging run down the left by Elliot Watson almost led to the third Whitley goal but the young defender’s cut back was cleared almost off the line.

Bay keeper Dan Lister was called into action to save another effort from Walker as the visitors came more into the game towards half time. Four minutes before the interval their efforts were rewarded when they pulled a goal back after Smith played a good ball through to Walker who slotted it beyond Lister to give the half time score a rather flattering look for the visitors, while providing a warning to Whitley that the game was far from won.

They began the second half in positive fashion, Orrell forcing Dawson to save with his feet in the 48th minute. Neat approach play involving Anderson and Coulson set up McFarlane but his shot was too high and failed to trouble Dawson. Four minutes later the Bay captain, playing further forward than in recent games, made amends with a great shot from the right of the box to restore Whitley’s two goal lead. Eight minutes later another attack down the right proved fruitful as Richard Coulson cut in before unleashing a tremendous shot across Dawson and into the net. With a three goal cushion, Whitley were cruising to victory and Morien brought a good save from Dawson after being played in by McFarlane. In the 68th minute they added a fifth goal when Lewis Orrell seized onto a weak back pass, took the ball to the by-line before crossing it into the goalmouth to give Morien a simple tap in. It was a well deserved reward for the big, strong striker who had proved a real handful on his debut.

Whitley might have increased their lead 11 minutes from time but a shot from Anderson clipped the top of the bar before going out of play.

To their credit, Redcar kept going and they won a penalty seven minutes from time following a tug on Jordan Rivis inside the box. Rivis took the spot kick himself and beat Lister to reduce the arrears. The late goal led to a flurry of action in the Whitley box with Lister saving from Smith before a stoppage time shot from Chapman was blocked. It was all too little and far too late to affect the outcome and Whitley were soon able to celebrate an excellent and morale boosting victory with good performances throughout the team.