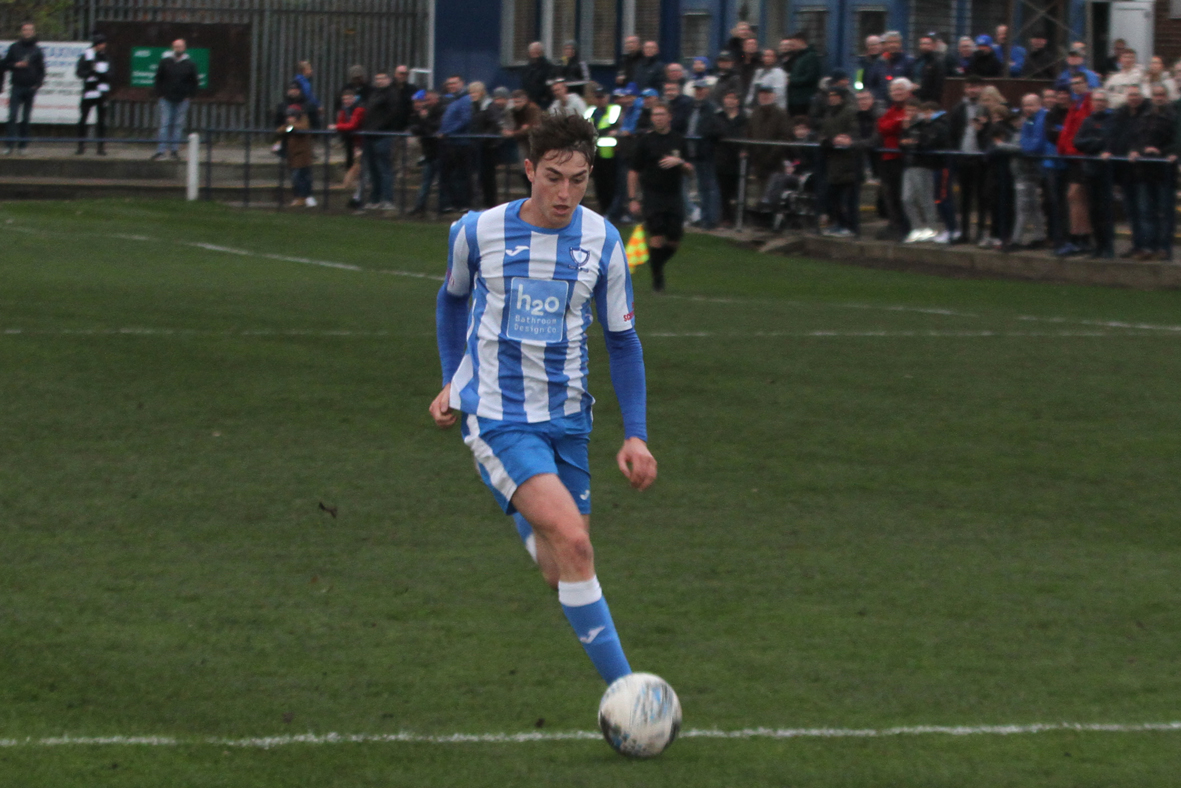 Bay manager Derek Forrest was a very happy but also relieved man after watching his side’s impressive 5-2 victory over visitors Redcar Athletic.  “It was wonderful, but before the game you’re just nervous that it goes well. We’ve put a bit of work in on the training ground, we’ve decided which team it is that’s going to play and we’ve brought the experienced lads back. Then after ten minutes you’re 2-0 up and what a great feeling that is! Scoring early gives you a nice cushion. After that we hit the bar but you know you need the third one and when the third one doesn’t go in you’re on edge because moments can change games and give momentum. They’ve got that goal just before half time and you know they can come out for the second half with some momentum.  But for us to score the three goals after half time is really satisfying, but in true Northern League style even at 5-1 and you’re over the line there’s going to be something happen, and it’s a penalty against you to take a bit of the gloss off, but overall we’re delighted!  We’ve won 5-2, and got three more points and improved our goal difference.

“It looked like we could score today whenever we went forward. It was a good debut for Malky (Morien), he’s a powerful lad and I think he’s given us a real belief about our performance and holding the ball up, He and Lewis (Orrell) combined well, in fact we had a lot of good combinations on the pitch which was important. To think Callum Anderson and Gavin Dick scored the first two goals and they’re both really sitting in midfield was really good. It adds to our scoring possibilities and those two lads have done great.  Gavin hits the ball really well so I’m really pleased for him because he put a great shift in and worked hard. It’s been a bit of a quiet start for him so it’s very satisfying.”

Derek then introduced Luke Hannant one of his former students at Northumbria University who went on to play for Gateshead, Port Vale, Cambridge and is now at Colchester. Luke was in the north east at the weekend and was at Hillheads to see the game.

Giving us his thoughts as a professional footballer, Luke told us “It was a good game, I played here once on the end of a bad result for Team Northumbria, but it was nice to come back. It was a really positive result because there are some very young players in the team as well some older players who are more mature and experienced. I think you could see that today. The result spoke for itself, with some really well taken goals and lots of positives to build on for the rest of the season.  You need the experience and the younger legs and I think you’ve got a great balance here. Overall it was a great team performance and even at the end they were digging in, defending and running hard until the end. That’s the kind of work rate and mentality you need to do well.”

Summing up the day, Derek said he was delighted to see such a big crowd at the game. “It’s huge thanks to the 530 fans, they’re great supporters and they’re loyal. They’ve come back again and I’m really pleased that we’ve given them a win today.”