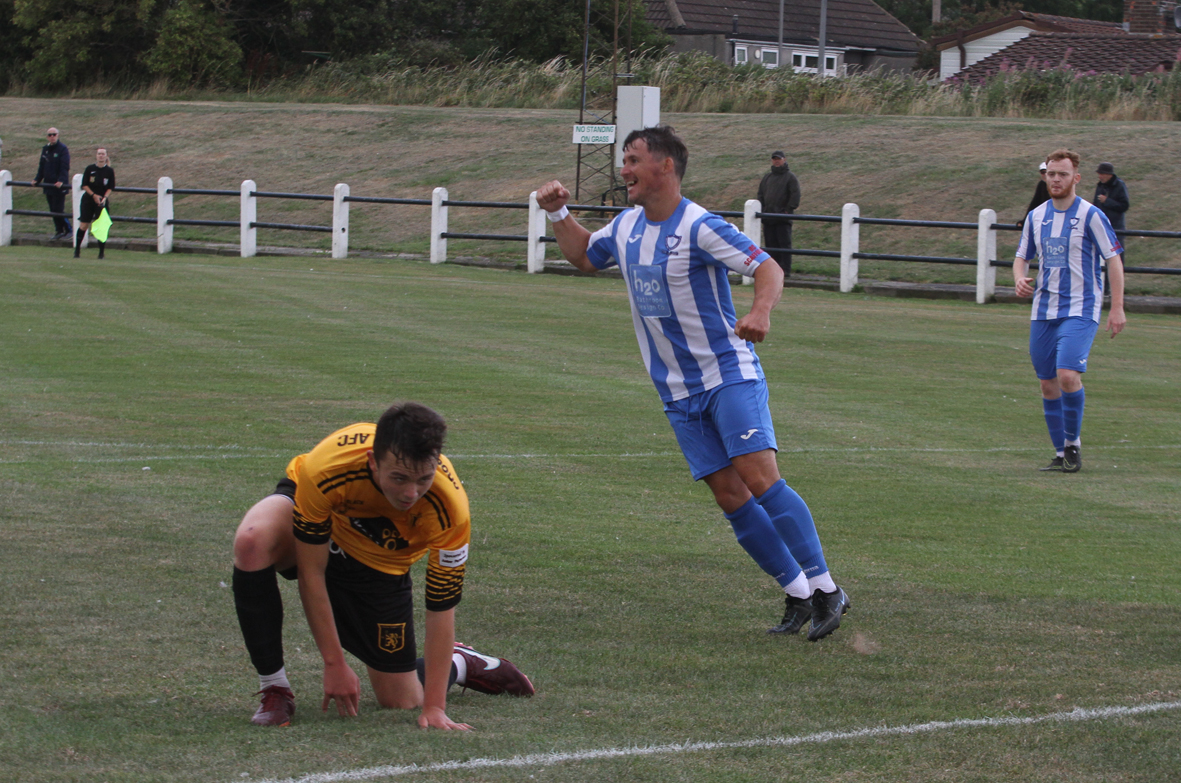 Whitley are up to third place in the Northern League table after this latest victory. They took the lead after little more than five minutes and despite conceding a penalty not longer after, they always looked in control and ran out worthy winners on an afternoon when the Crook area of County Durham remained dry and escaped the torrential rain which affected games only a few miles further north.

As expected, Stephen Turnbull was missing from the Bay side after picking an injury in the midweek game against West Allotment but his replacement Ben Richardson quickly made an impact.

Whitley began strongly and a cross into the box from the right by Sean Taylor was accidentally hit goalwards by a Crook defender. The ball was only kept out by keeper Ronan Makepeace whose clearance to the edge of the box reached Richardson and the midfielder’s first time shot flew into the net to give Whitley a sixth minute lead.

The positive start was dealt a blow six minutes later when Richardson tripped an opponent as he went to challenge a Crook broke player as he broke through into the box. Referee Thomas Lishman pointed to the spot and Crook captain Craig Moody equalised with the penalty although Dan Lister went the right way he could not keep the ball out as it hit the underside of the bar and went into the net.

Whitley fought back and Josh Gilchrist volleyed just wide from the edge of the box before Luke Porritt tried his luck with a speculative effort from 25 yards which drifted wide.

Virtually all the attacking play was coming from Whitley while Crook’s efforts broke down outside the box. Michael Hall only just failed to get on the end of a cross from the left while Porritt’s delivery was headed over the bar by Malcolm Morien.

Whitley retook the lead eight minutes before the interval with an excellently constructed goal. A ball out of defence was played down the right to Sam Irons who used his pace to burst forward before crossing into the box. Morien cleverly stepped over the ball, confusing the home defence and leaving Sean Taylor unmarked with the opportunity to knock it home from eight yards.

Harvey Neary then shrugged off the challenges of two defenders as he broke into the left hand side of the box but tried to beat one man too many and his attempted pass to Morien was cut out.

Much the better side in the first half, Whitley sat back in the early stages after the interval, allowing Crook time on the ball but despite their possession, the hosts could make little impression on a tight Bay defence. A shot which failed to trouble Lister shortly before the hour mark was the best they could muster. Indeed the Bay keeper had barely a shot to deal with all game other than the penalty.

Whitley needed a third goal to make the game safe and it duly came in the 63rd minute and was another example of good quality play. A free kick wide on the left was played short by Richardson down the line, catching the Crook defence unawares. The dangerous Porritt, who troubled the home defenders all game, swung over a dangerous cross to the back post where Scott Lowery leapt above his marker to plant a downward header into the corner of the net.

Crook looked a beaten side and created little threat in the remainder of the game. Bay substitute Lewis Orrell had two attempts on goal, a shot from the edge of the box and a header from Elliott day’s cross that was just too high to worry Makepeace.

Nine minutes from time the Crook keeper saved his side from a heavier defeat with a fine save to deny Whitley’s second substitute Oliver Cresdee when the youngster was clear on goal.

Whitley’s fifth win in six league games is their best start to the season for many years and while there are plenty of tough tests to come, the signs are good with goals coming from throughout the side and the defence looking secure.