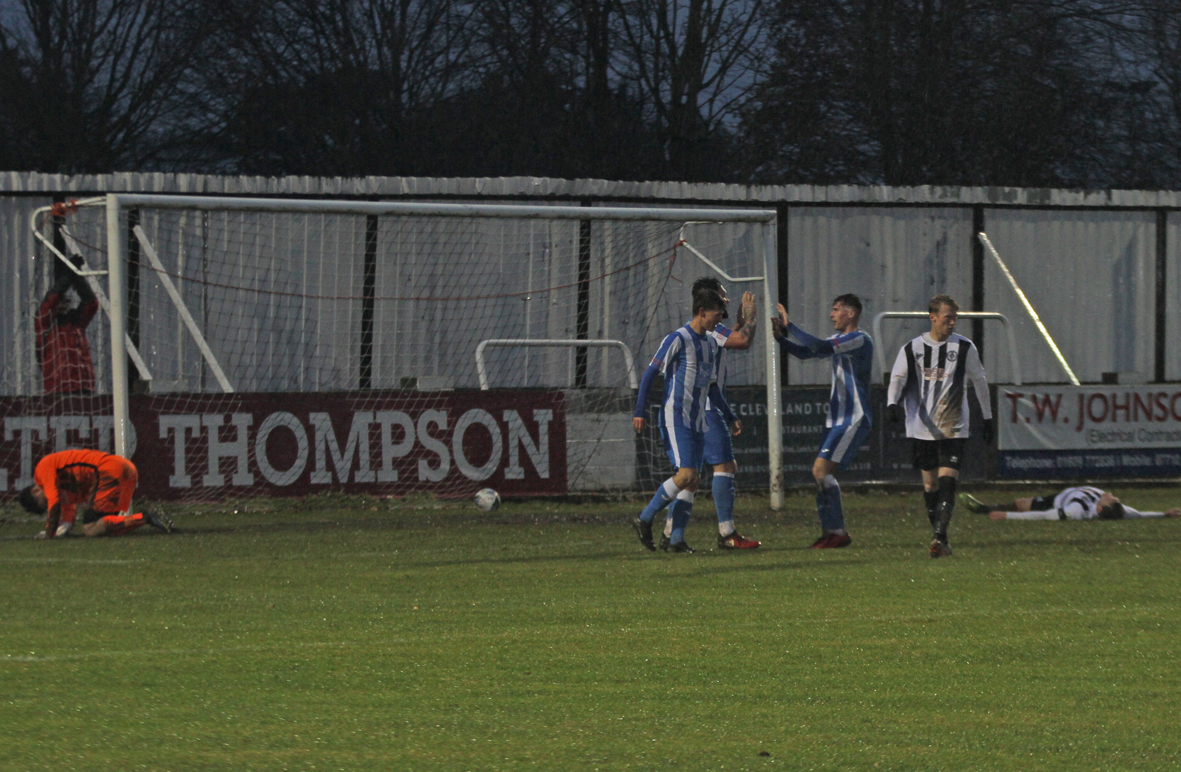 Whitley suffered a third consecutive defeat when they made the journey to North Yorkshire to face bottom side Northallerton Town.

On a wet and cold afternoon, Whitley came from behind to lead at half time but defensive errors in the second half proved costly as the hosts ran out narrow winners to climb two places up the table.

With Craig McFarlane unavailable, Tom Smith returned to the side after a two month layoff through injury. Defender Eoghain Sherrard also started the game while Adam Shanks wore the captain’s armband.

Inside the first minute, Malcolm Morien fired a shot over the bar and following an eighth minute free kick some 25 yards from goal, the ball was put behind for the first of a series of right wing corners as Whitley searched for the opening goal. The breakthrough so nearly came in the 14th minute when David Parker played in Morien whose rasping shot crashed off the bar with keeper Roxburgh beaten.

However, Northallerton quickly broke away down the right, a route that was to prove a danger for Whitley all afternoon. When the ball was played into the box, Daniel Chapman slotted it home from close range. The goal came against the run of play but highlighted the need to take opportunities when they came.

Whitley drew level 12 minutes later when David Parker was played through on goal and comfortably beat Roxburgh. The equaliser seemed to lift Whitley and they had several chances to go in front, firstly when Scott Lowery got up to send a header across the goal but beyond the far post. Morien then drove a shot wide from the right edge of the box before setting up another heading chance for Lowery which was saved by the keeper. Maintaining the pressure, Whitley deservedly took the lead two minutes before half time. Good work by Shanks on the left took him to the edge of the box where he crossed the ball to Orrell on the right. He in turn played it across the face of goal where Morien slotted it home for a well worked goal.

Leading at the interval, Whitley would have been hoping to press home their advantage on the restart but with the rain pouring down making the surface increasingly slippery, both sides struggled to control the ball. Dorward had replaced Smith at the interval but when Northallerton set up an attacking move down the right flank, he was unable to prevent a cross from the wing and Shaun Ryder, signed the previous day from Newton Aycliffe, fired home to level the score with 52 minutes on the clock. Just two minutes later, another attack down the right by Town nearly brought about a goal and not long after, an attempt by the hosts flew narrowly wide. Northallerton were using the width of the pitch to their advantage and their pace down both wings was troubling the Bay defence. Whitley too were looking to attack down the left wing but their final ball was letting them down.

Passes were frequently going astray in the tricky conditions and chances were coming and going at both ends. Parker had a shot saved before Dan Lister made a great fingertip save to keep out a fierce shot from Hudson. Failure to clear the ball in defensive situations has been Whitley’s failing in several previous games and it proved crucial again when Ryder, looking Town’s best threat coming forward from midfield, was allowed time in the box to turn and drive a low shot beyond Lister to put the Yorkshiremen back in front.

There were still 15 minutes to go and when Whitley retaliated, Morien tested Roxburgh with a shot that the keeper held at the second attempt but they suffered a blow with ten minutes remaining when Shanks was forced off with a knee injury, Josh Gilchrist taking his place. Orrell had a shot pushed wide two minutes later but Northallerton were now defending in depth as they sought a valuable three points. Whitley tried to force another equaliser but their finishing lacked conviction with few attempts troubling Roxburgh. Free kicks in threatening positions came to nothing during seven minutes added time, as Northallerton held on to claim the victory.