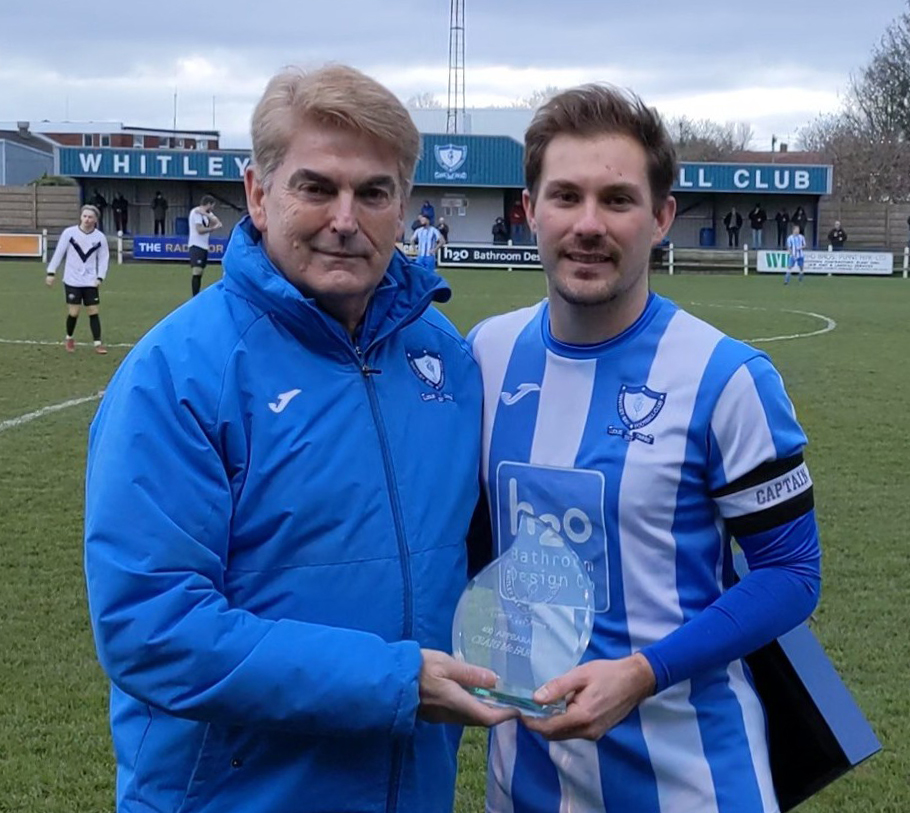 Whitley crashed to their second heavy defeat in five days when once again they were unable to cope with the attacking intent of their opponents. The manner of their capitulation is obviously extremely worrying but also baffling considering that essentially the same squad of players had won their three previous league games.

Before kick off, Bay Chairman Paul McIlduff made a presentation to Club captain Craig McFarlane to commemorate his 400th appearance, one of just eight players ever to reach this impressive landmark.

A notable absentee from the team was Richard Coulson, who signed for Northern Premier League East Division side Dunston during the week.

Ashington showed their intent from the first whistle and inside 20 seconds Craig Spooner, who had a brief spell at Hillheads two years ago, brought a superb save from Dan Lister, forcing the Bay keeper to push a 20 yard shot over the bar.

It was against the run of play when Whitley took the lead in the fifth minute. Malcolm Morien played the ball through to Josh Gilchrist on the right of the Ashington box and the youngster who celebrated his 19th birthday earlier in the week slotted the ball beyond Dryden for his first goal in Bay colours.

It was just the start that Whitley needed after their midweek defeat at Newton Aycliffe but they were soon pushed back by a lively Ashington side and Lister made another fine save in the ninth minute to deny Bobby Taylor.

When Whitley broke upfield in the 19th minute they very nearly doubled their lead as Jamie Dunn tried to work his way through the Colliers’ defence but he poked his shot just wide of Dryden’s left hand post.

Back came the visitors and Johnson fired over the bar before Dunn headed behind when under pressure inside his own box.

Whitley retained their lead until the half hour mark but the equaliser eventually came and it was a tremendous shot from Taylor that drew the sides level. His effort from around 25 yards swerved on its way towards the top corner and although Lister got a hand to the ball he could not keep it out.

Six minutes later Morien fired high over the bar after Lewis Orrell crossed into the box but within 60 seconds Ashington took the lead when new signing Jordan Lashley exchanged passes before driving a low shot past Lister.

Just before the break Gilchrist went close for Whitley but the Colliers were deservedly in front at the interval.

Three minutes into the second half Whitley had a chance to snatch an equaliser when Dorward’s low corner seemed to confuse the Ashington defence and the ball was allowed to reach Dunn inside the six yard box but his rushed attempt flew over the bar.

Any hopes of a Bay recovery were dashed nine minutes after the resumption when Sampson played in Lashley and slack defending allowed him time and space to drive the ball past Lister to make it 3-1.

Gavin Dick fired high over the bar before Whitley made a change of strikers just before the hour, with Adam Shanks replacing Malcolm Morien. Before the Bay’s leading scorer could make an impact, Ashington had added a fourth, with Johnson slotting home from Spooner’s cross.

A 71st minute shot from Shanks was pushed over the bar by Dryden but it was an all too rare test for the visiting keeper. Johnson got his second goal of the game with nine minutes remaining, before the impressive Spooner finally got his name on the score sheet with an excellent shot into the top corner which gave Lister no chance. It rounded off a miserable afternoon for Whitley who will be looking for a huge improvement when they make the lengthy trip to Northallerton next weekend.