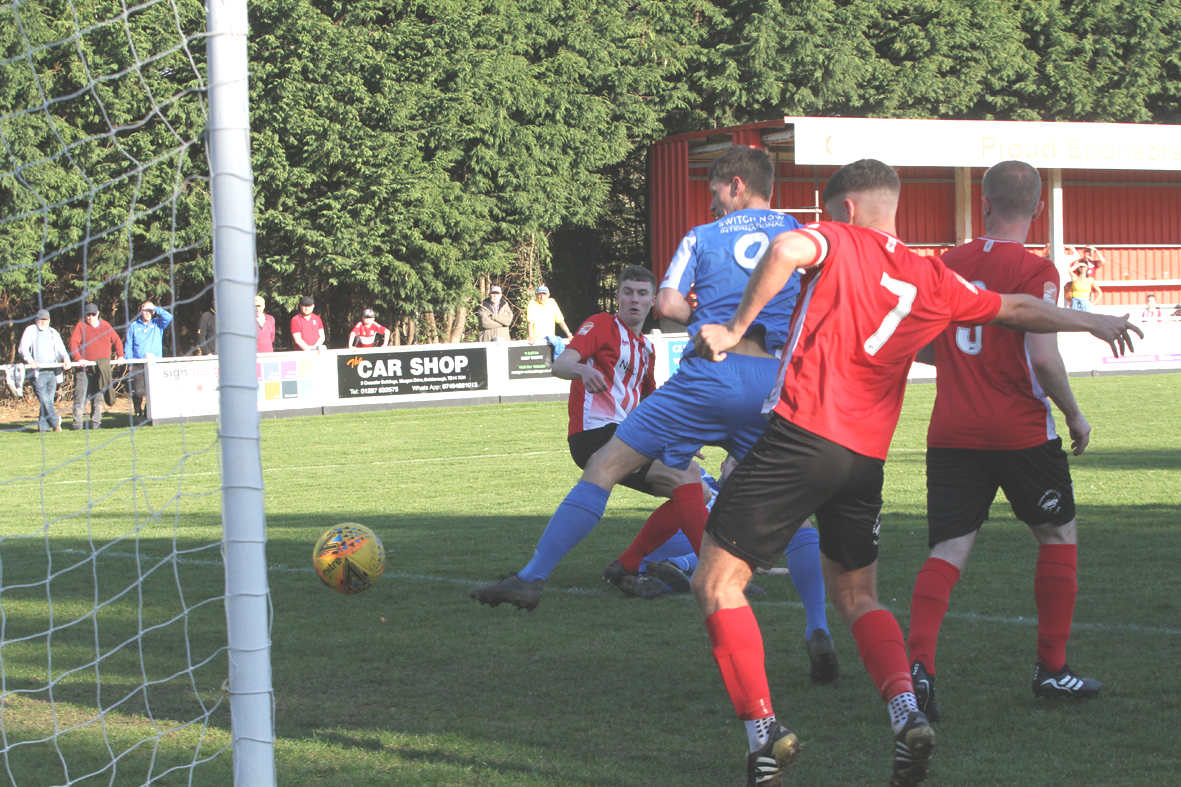 Whitley returned home from Guisborough with a valuable point after a hard fought game ended all square. The Priorymen were on a good run of form and had scored six goals in their last outing but especially in the first half, chances were at a premium.

On a warm and sunny spring afternoon, the excellent crowd of more than 450 fans had to wait 14 minutes for the first attempt on goal and then the ball was blazed high over the bar by the hosts. Three minutes later they went close when Louis Johnson fired narrowly wide after good build up play from the home side.

When Whitley pushed forward, Zack Bewley played a low ball into the Guisborough goalmouth from the left of the box but keeper Robert Dean cleared with his feet. Unfortunately Bewley’s game was over just two minutes later when he fell badly after challenging for the ball. It was immediately clear that he was in severe pain and after a considerable delay, he was helped from the field and taken to hospital in Middlesbrough with a dislocated shoulder which was thankfully soon put back in place.

When the game resumed, Reece Havelock-Brown, one of Nick Gray’s recent signings, sent a shot just over the bar but the nearest Whitley came to scoring in the first half was when a mistake in the home defence resulted in a mis-placed back pass eluding Dean and going only inches wide of an unguarded net.

Six minutes before the break, Guisborough won a free kick just outside the Whitley box but the shot was blocked, then moments before the interval, the ball was headed wide from a corner as the home side finished the half strongly.

The second half began in similar fashion and after just two minutes, Dan Lister had to make an excellent save to push a fierce shot from Kieran round the post. When the corner was played in from the right, it was met near the back of the six yard box by skipper Bartliff whose header flew into the top corner of the net to put the home side ahead.

Four minutes later there was another delay when Callum Anderson took a knock on the head but he was soon able to continue.

Whitley battled their way back into the game and just before the hour mark they drew level when Lewis Orrell delivered a left wing corner into the box and when it was knocked down, Adam Shanks reacted quickly and flicked the ball into the net from close range.

Five minutes later Bailey Geliher almost set up another chance after going past his man on the left wing. Two further attempts on goal were blocked as Whitley enjoyed a good spell.

Guisborough came back and Lister made another fine save to keep out Dillon’s header from a corner before the loose ball was eventually cleared after a scramble in the box.

With time running out Lowery and Geliher attacked down the left and Orrell put a shot over the bar as Whitley pressed forward in search of a winner but although they finished the stronger, on the balance of play over the 90 minutes, a draw was a fair outcome. The point gained lifts Whitley a little nearer First Division safety but the game was overshadowed by the bad injury to Zack Bewley, who has looked a good acquisition in the short time he has been at the club but now seems set to miss the rest of the season.