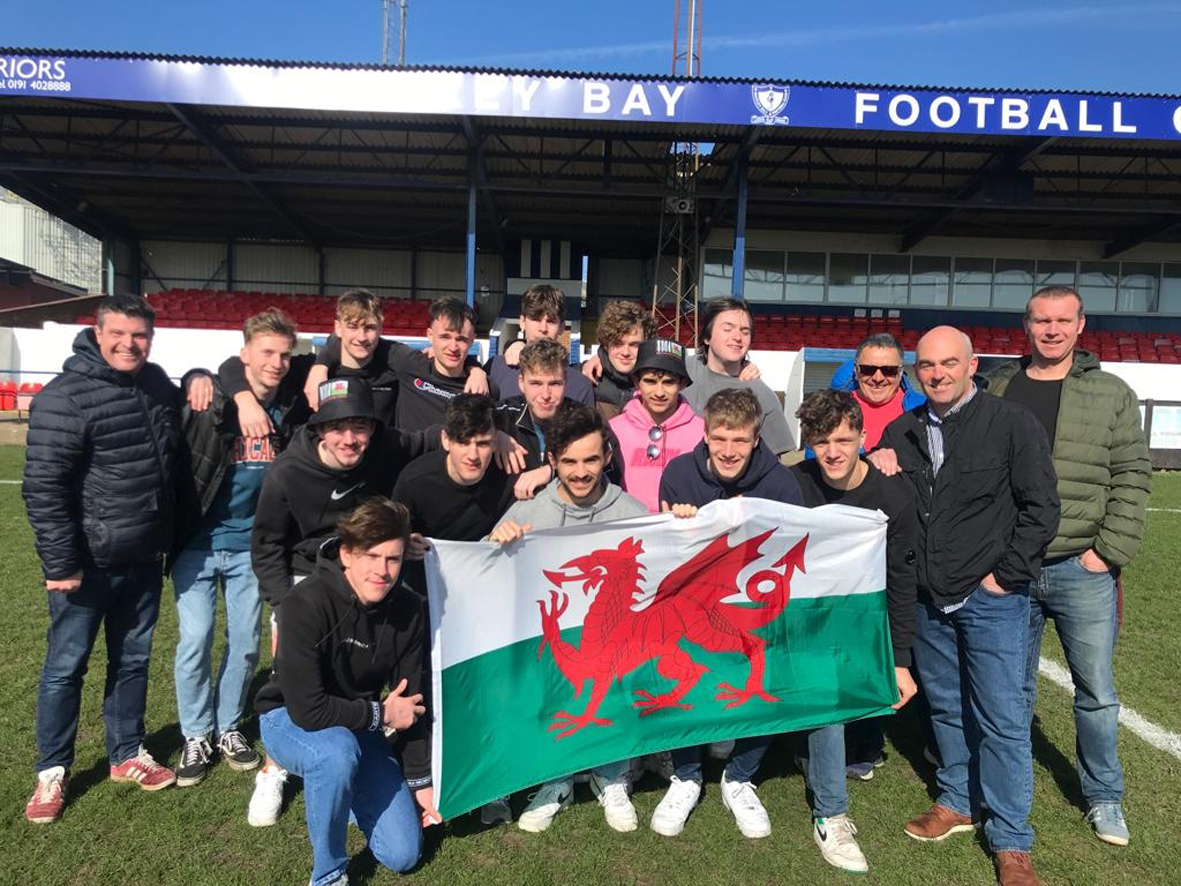 At Saturday’s game against West Auckland, Whitley Bay hosted three groups of fans who were visiting the area for the weekend from across the UK.

Long time Bay fan Mike Renner came with a group of former colleagues from around the country while Scott Ford brought a party from Scotland to the area for his stag weekend.

The biggest visiting group were Cardiff City fans who had booked a weekend in the north east for their side’s scheduled Championship fixture at Middlesbrough and to celebrate an 18th birthday. However, with Boro in the FA Cup Quarter Final on Saturday, the league game was postponed, leaving the Cardiff fans looking for an alternative game on Saturday afternoon. Having flown up to Newcastle, they were hoping to find a game on Tyneside and chose Whitley Bay!

On hearing from the groups, the club laid on hospitality in the Seahorse Clubhouse and provided photo opportunities on the pitch ahead of the game. It was a busy afternoon for the club, in particular the bar staff Jay, Lennox and Laura along with Mamiou and her catering team who all worked tirelessly. It was a great team effort by all concerned!

Steve Jones, leader of the Cardiff group has sent us this message:

“We are just arriving back from a great trip to Newcastle. I would just like to take this opportunity in thanking you and your colleagues for your amazing hospitality on Saturday. We all had a fantastic time, enjoyed the game and we will all have great memories of the day and the boys bought some mementos of the day like hats and scarves. I love the Viz book that I was presented with and will keep forever, such a great touch, thank you. Love to see grassroots football at its finest you should all be very proud of your club and your hospitality that was shown. It’s just a pity the result didn’t go your way. Good luck with the rest of the season and I will definitely be looking out for your results in the future.”

We have also received this kind message from a member of Mike Renner's party:

"I would like to thank you for the tremendous organisation you did on Saturday for us around Mike Renner with food, man of match and photos - you are all a credit and it was a great experience and Mike really enjoyed it and so did we all. It has certainly given Mike and us a lift despite his challenging health condition. From the catering staff, to announcer, to gate people and Martin who made it such a special day.
I am sure we will see you again and I will indeed pass the message on. Thank you, Peter and the rest of the crowd."

Alan Wishart, speaking on behalf of Scott Ford's stag party also got in touch with us: "Many thanks again from all of us who visited on Saturday for Scott's stag. Every person we met was a credit to the club and a great day was had by all. We really cannot fault anything about the day, and have to say Whitley were a bit unlucky on the pitch! We were all in agreement that we want to come back and take in another game in future.
Thank you Steve, Peter, Alan and all the members of the three groups who visited Hillheads at the weekend. It was a pleasure to meet you!