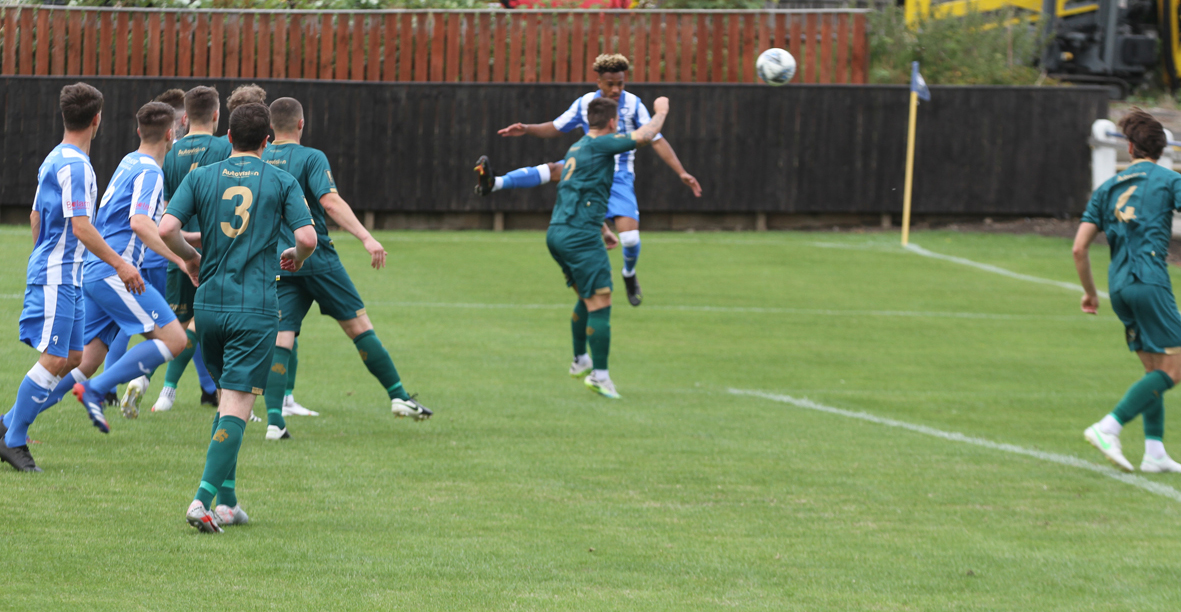 Whitley face a replay on Humberside on Tuesday evening after a cup tie with few clear cut chances ended in a draw at Hillheads.

There were several changes to the side beaten by Penrith in midweek. Craig McFarlane and Daren Hamilton were unavailable so Khalid Kharufa made his debut while Luke Taylor started for the first time this season. The experienced Chris Bannon was preferred to Dan Lister as goalkeeper and Adam Shanks, on his 100th appearance, was handed the captain’s armband.

Defences were on top in the opening stages and it took until the 14th minute for the first real chance on goal which came from the visitors when Jamie Forrester fired a low shot wide of the far post. Whitley were struggling to put passes together, and North Ferriby were growing in confidence so it came as no great surprise when they took the lead, following poor play in defence when Whitley failed to clear their lines and gave the ball away on the edge of their box. A cross came in from the left and Danny East sent a looping header over Bannon and into the net to give the Villagers a well deserved 25th minute lead.

The goal stung Whitley into action and within a minute, Richard Coulson drove a shot wide of goal before Shanks had a shot blocked after working his way into a good position on the edge of the area.

Just past the half hour, Whitley won a free kick out on the right and Kharufa delivered an excellent ball towards the back of the six yard box where the unmarked Jason Chanayire sent a header back across keeper Lewis Exall and into the far corner of the net to draw Whitley level.

The goal lifted Bay spirits while unsettling the visitors and just three minutes later, a cynical foul on Shanks as he tried to burst clear brought a caution for Tilsley. On the stroke of half time, Matty Weirs curled a free kick towards goal but Exall pushed the ball away to safety.

North Ferriby had looked the better side in the first half but Whitley started more brightly after the interval and Chanayire almost put them ahead after being played through on goal. His shot beat the dive of the keeper but crept inches beyond the far post. Another cynical foul, this time by Louis Kirk, stopped a Whitley attack and brought another yellow card for the visitors, and not long after, Jamie Dunn was felled by a physical challenge from goalscorer East. Whitley were looking the better side at this stage but chances remained at a premium. With 20 minutes left, Dunn played the ball through to Matty Weirs but his shot was acrobatically pushed the ball away by Exall. Substitute Joe Malone had the ball in the net within four minutes of coming off the bench but his effort was flagged offside.

Five minutes from time, Coulson had a glorious chance to seal the tie when played clear just inside the Ferriby half.  He closed in on goal but hesitated before getting in a low shot which was blocked by Exall. The rebound came back to Coulson but this time his attempt was scrambled away by Dennett. It was the final opportunity to decide the game so the sides will meet again on Tuesday evening at North Ferriby (7.45pm) with West Allotment Celtic awaiting the winners in the next round.