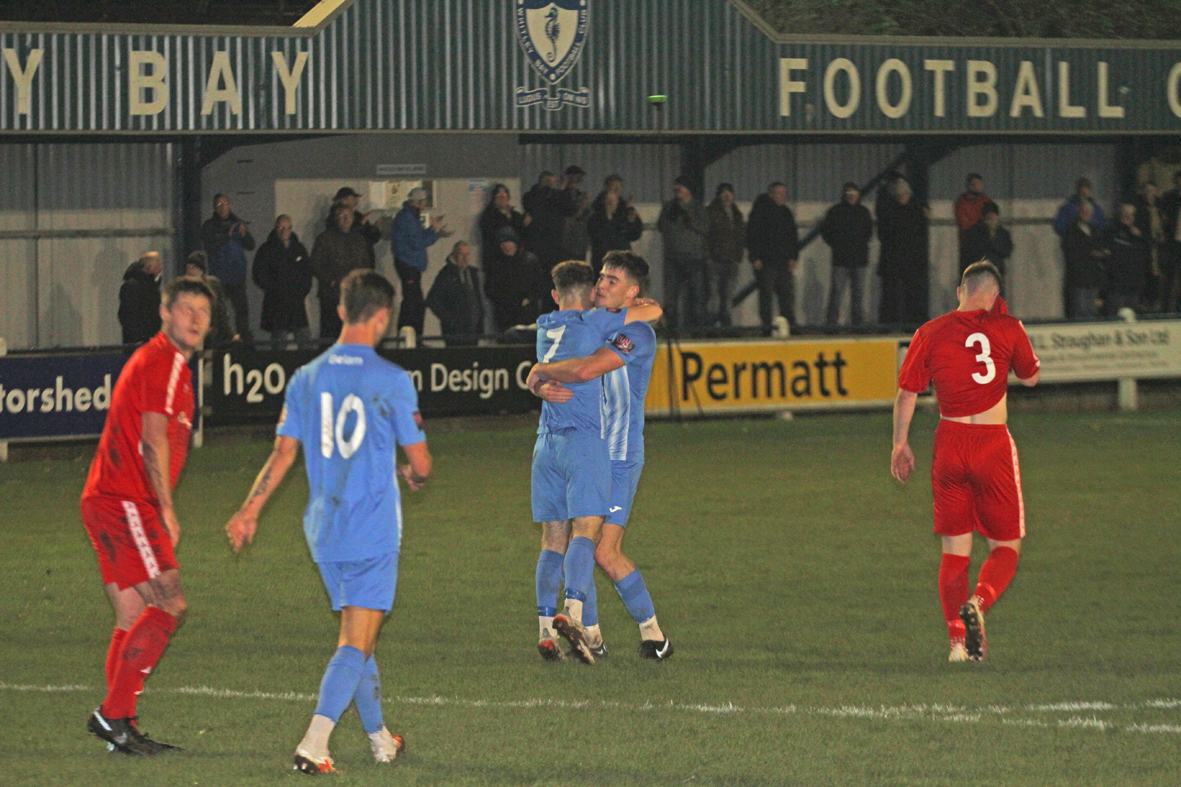 This top of the table encounter between 2nd and 3rd provided rich entertainment for the fans but unlike recent games, Whitley were not able to conjure up a late winner and had to be content with a share of the spoils.

A draw was probably a fair outcome between two evenly matched teams as the game swung first one way then the other, both sides going ahead before having to come from behind in a six goal thriller.

The game got underway at a rapid pace with both sides looking to attack but unable to break down well organised defences. The first chance for Whitley came in the 12th minute when Bailey Geliher tried to capitalise on a mis-hit clearance by McHugh but the keeper redeemed himself by blocking the effort at the expense of a corner. Luke Porritt, back in the starting eleven following injury, attacked with pace down the left and when his effort was repelled, Elliott Day struck the ball high over the bar.

With 27 minutes played, Aycliffe attacked down the right and when the ball was crossed into the goalmouth, it took a brave defensive header by sam Irons to put it over the bar from almost on the line.

Ferguson’s left wing corner was met by Marc Costello who came in at the near post to power a header low into the net to put the visitors ahead.

The lead was short lived however as Whitley hit back within two minutes. Harvey Neary, impressive in the Bay midfield, played the ball through to Geliher who left McHugh wrong footed as he slotted the ball through the legs of Aycliffe captain Aaron Brown and beyond the keeper from 15 yards to level the score on the half hour.

Four minutes later a ball whipped in from the Aycliffe left, flew across the face of the Bay goal and just beyond the far post. The action was now relentless and within three minutes Whitley were in front. A flowing build up involving Harvey Neary, Cameron Brewis and Josh Gilchrist saw Porritt find space on the edge of the box and he unleashed a great shot from 18 yards that left McHugh helpless.

Three minutes before the break Aycliffe might have drawn level but Costello’s powerful volley clipped the top of the bar and went behind for a goal kick.

Whitley retained their narrow advantage to the interval but within ten minutes of the restart Aycliffe had matched them in coming from behind to take the lead.  On 51 minutes, a throw in on the right started a move which saw Joe Ferguson evade the challenge of two defenders before driving a low shot beyond Pat Nash to restore parity at 2-2. Three minutes later former Bay midfielder Callum Munro exchanged passes with Costello on the right of the Bay penalty area before smashing a great shot from a narrow angle over Nash and high into the net.

Two minutes later back at the other end, Neary fired over the bar in Whitley’s next attack.

Striker Andrei Ardelean, beginning a second spell at Hillheads after signing from Tow Law just 24 hours earlier, was introduced on the hour and almost made a spectacular start. His first touch was to play a perfect through ball which released Josh Gilchrist inside the box but his shot went agonisingly inches past the far post.

Whitley continued to press forward and they were rewarded in the 67th minute when Brewis chipped the ball into the goalmouth and when it was headed out, it fell for man of the match Neary who struck a tremendous volley from the edge of the box that bulged the net before McHugh could move.

Level again, now at 3-3 the game was wide open and Whitley thought they had won a penalty with 70 minutes played when Day went to ground as he challenged Munro for the ball inside the six yard box but play was waved on.

An incredible scramble in the Aycliffe goalmouth 13 minutes from time, following a free kick played deep into the box by Turnbull saw McHugh make a great save from Lowery as the ball ricocheted around the six yard box with a series of Bay attempts on goal repelled by determined last ditch defending.

Both sides continued to go in search of a winner but while Whitley created the better chances, their efforts to snatch another last gasp goal proved unsuccessful as Aycliffe defended valiantly to the final whistle.