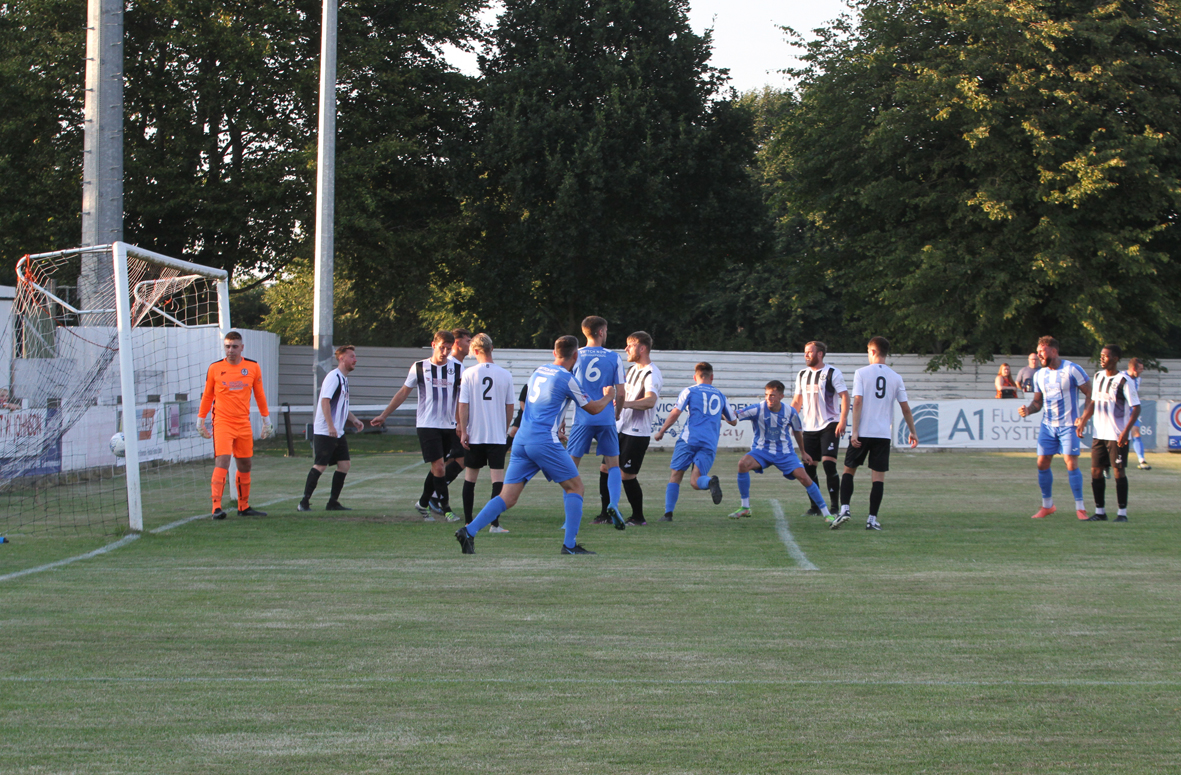 Whitley rewarded their fans who made the long midweek trip to North Yorkshire with an entertaining display and a well deserved victory.

After a very hot day, the game got underway in temperatures just under 30 degrees celsius but Whitley made light of the testing conditions, attacking from the start and dominating play. A right wing corner in the tenth minute caused problems for the home defence who eventually cleared the ball, but when Ben Richardson sent over a second corner kick two minutes later, an attempted clearance was seized on by Jackson Ward who drilled his shot powerfully into the net from the edge of the six yard box for his first goal for the club, giving Whitley a well deserved lead.

In the 19th minute, Oliver Cresdee and Malcolm Morien cut through the home defence and Ward might have doubled the lead but keeper Tom Dawson got his fingers to the ball to push it wide. The resultant corner saw the hosts struggling again as a header flew inches past the post.

Whitley were making good progress down the right flank with Lewis Orrell and Sam Irons prominent and when Irons crossed low into the box a few minutes later, the ball was just too far in front of  Morien for the Bay striker to get the finishing touch.

Midway through the half there was a drinks break which gave the hosts a chance to regroup after playing much of the opening period in their own half.

On the half hour play was held up after Dan Lister took a bad knock and required treatment after going for a high ball into the goalmouth. Whitley stayed on top and had further chances to extend their lead but could not capitalise and they paid the price in first half stoppage time.

A quickly taken throw in near the half way line seemed to catch them unawares and when the ball was played wide to the right, Ryder played it back across the face of goal where Anthony Snook got in front of two defenders to poke it inside the near post for the equaliser. It was virtually the first chance Northallerton had created all game and it saw the sides go in level at the interval.

The home side looked much livelier when play resumed but with captain Michael Hall commanding in the air, Whitley withstood the pressure and came back strongly. With 58 minutes played, Scott Lowery’s header from a cross by Lewis Orrell had Dawson beaten but the ball went narrowly past the back post. Whitley were passing the ball about accurately and three minutes later Irons crossed low into the six yard box from near the right by-line and Morien was on the spot to fire home from close range, for his third goal in four games.

Northallerton responded seven minutes later with Lancaster’s shot hitting the outside of the post before Lister made a good save to keep out a shot from the rebound.

Following a second break for players to take on drinks,  Cresdee, who was having an impressive game on the left wing, played the ball across the penalty area where Morien touched it on to give Josh Gilchrist a glorious opportunity on the right edge of the box but the substitute’s side footed shot failed to find the target.

Within seconds of coming off the bench, Joe Groves-Forbes got a header on goal but Dawson made the save.

Despite their dominance for long spells of the game, Whitley remained with a slender one goal lead and there were some anxious moments late in the game when Town pushed forward in search of a second equaliser.

Into stoppage time, Northallerton substitute and ex-Bay striker Nathan Stephenson went close but Lister made an excellent save, palming the ball over the bar just as the home fans thought they had snatched a draw. Whitley successfully defended the corner that followed and were shortly able to celebrate a victory that might have been by a much more convincing margin if they had taken all the opportunities that they had created.

However, the fact that they created chances throughout the game was a big improvement on their last two outings as they made it two wins from their first three league fixtures.