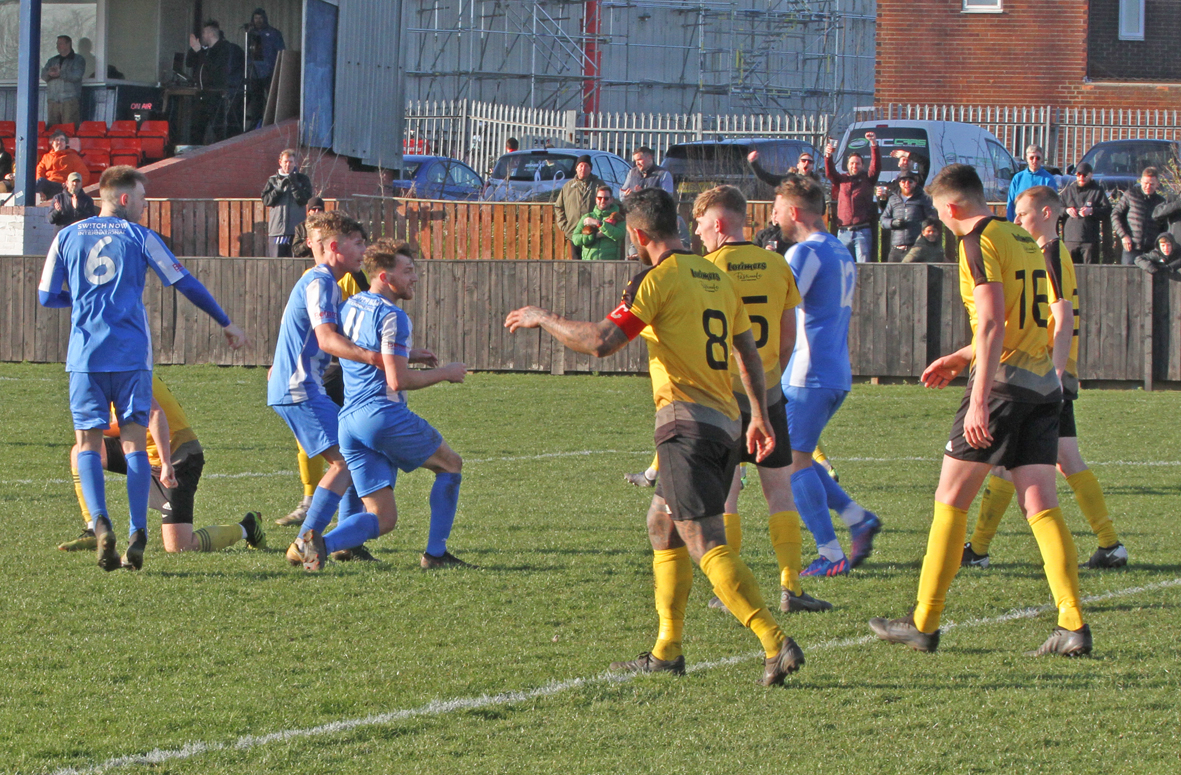 Whitley’s three game unbeaten run came to an end with a narrow defeat at home to West Auckland though a draw might have been a fairer result.

On a fine sunny afternoon, the crowd was swelled to almost 500 by visiting groups from Scotland and Cardiff. Throughout a difficult season, Whitley have remained one of the best supported clubs in the league and this was by far the biggest Northern League attendance of the day. Despite the defeat, the signs of improvement under Nick Gray’s management are clear to see and from the first whistle, Whitley looked lively and were quick to the ball, matching their more experienced opponents. To take immediate advantage of the stiff wind blowing in from the coast, Whitley opted to play towards the Hillheads Road end in the first half and inside the first minute, Adam Shanks, recalled to the starting eleven, attempted to lob the keeper but his shot was held above his head by Guthrie.

Responding quickly, the visitors raced away upfield but an attempt on goal flew high over the bar. A ball played through the Auckland defence reached Lewis Orrell giving him a clear run on goal but the midfielder had strayed just offside. On the quarter hour, the visitors went close when a crossfield pass found Corey Nicholson whose shot was saved low down by Lister.

Whitley included two debutants in their starting line up, midfielder Jackson Ward and defender Kyle Errington and the latter went close in the 23rd minute when his cross from the right was caught in the wind and landed on the roof of the net.

Lister made another good save at his near post just before the half hour but two minutes later Nicholson went past two defenders before slotting the ball just inside the upright to put the visitors in front.

Whitley were struggling to break down a resolute Auckland defence despite plenty of endeavour in midfield and the visitors retained their narrow advantage at the interval.

Just seconds after the restart, Whitley went close to getting an equaliser when Zack Bewley cut in from the left and his shot was blocked and put past the near post by Guthrie for a corner.

Bay hopes were dealt a major blow in the 64th minute when the visitors doubled their lead.  The goal came following a corner which was not cleared and Liam Potter with an overhead kick directed the ball into the far corner of the net beyond the reach of Lister.

Rather than letting their heads drop, Whitley battled straight back and a shot from well outside the box by Shanks was pushed just wide by Guthrie. Callum Anderson then attempted a looping header that did not have the power to test the West Auckland goalkeeper. Maintaining the pressure despite facing the wind, Whitley forced the visitors back in defence and with 12 minutes left, a series of attempts on goal saw the ball ricochet around the six yard box as shots were repelled before substitute Ben Richardson’s fierce effort flew over the bar. Just over two minutes later, Whitley were awarded a free kick around 25 yards out on the left. When Richardson played the ball into the six yard box, Bewley leapt to send a header past Guthrie and inside the near post to reduce the arrears and set up an exciting finale.

Fired up by the goal, the crowd really got behind Whitley in the closing stages and they might have drawn level with five minutes to go, when Bewley played an excellent ball from the left deep into the box but under pressure from a defender, Shanks could not get a proper connection and the ball flew over the bar.  In stoppage time, anxiety among the visitors showed as two West Auckland players were cautioned in rapid succession, then Scott Lowery’s shot landed on the top of the net. Whitley could not find a way through despite their best efforts and at the final whistle there was relief from the visitors at having held out for victory.