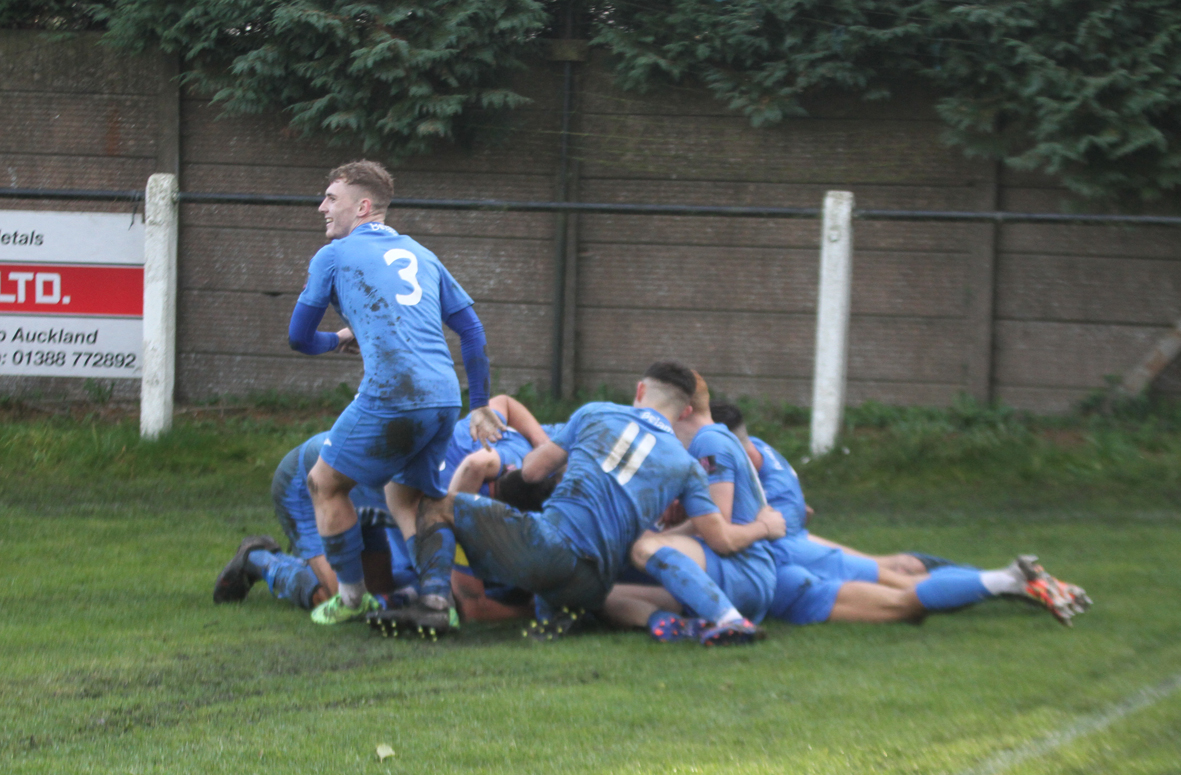 A last minute goal from Scott Lowery gave Whitley a hard earned victory in very testing conditions at Tow Law on Saturday and manager Nick Gray shared the delight of the players and fans. “Yes, it’s a good way to win a game.. but a hard way to lose it. We couldn’t ask for a better start could we, 2-0 up in about five minutes! That was great and we thought it was job done. But credit to them, they kept going and got back in it with a penalty. Whether it was a penalty or not, the ref‘s given it. They’re back in the game then we had another good opportunity that was marginally offside so it could have been 3-1. But we didn’t look after the ball as well as we should do in every department today. But one thing I’ll say is we kept on going at the end and if there was one team going to win it was us.”

Heavy rain and a very strong wind made conditions difficult on a ground where the sloping pitch is always a test for visiting sides, as Gray acknowledged. “It’s a tough place, always a tough place to come. You need to work hard to get any points here. We’ve done that and kept the run going. I’m delighted for the lads and Scotty Lowery getting the winner because he’s had a chest infection, but after that celebration with all the lads I hope they don’t get that chest infection off him today!

“To be fair it was good to see how many supporters we had here today.  When we got the winner you could hear the stand was full of Whitley Bay fans so it was great to see!”

Scoring late goals has become a feature of Whitley Bay performances in recent weeks and the word from management has always been ‘You can’t give up’. The message is always ‘don’t get your head down, don’t be disappointed, keep on going so you can’t have any regrets at the end’ and today we got a good goal with Scotty Lowery popping up at the end.”

“You look at how young we are and that’s how the Northern League is now. They’re good youngsters and we’re going to have days when they aren’t playing consistently.  I think some of the lads haven’t been great today but they’ve never stopped, they kept on going, they never got their heads down and never felt sorry for themselves, and that’s the type of lads we’ve got and we know that they will get better, but with young ones that’s probably what they lack, consistency.  But we’ve got that many young ones if one or two of them do have a bad day, then there are 3 or 4 of them that do play well. We’re in this all together. Their attitude is first class. You can see how together we are by the celebration after the winning goal, by the lads who didn’t play more than 20 minutes but were the runners at the end.  That shows how as a squad we’re all one unit.”

“Pitches are going to get heavier. It’s going to take it out of all the players and that’s why you’ve got to use your squad wisely. You’ve got to play some exceptional football, we have to learn that and do it. We’re going to have some bad days this season I’ve got no doubt about that but at the minute you’ve got to enjoy the good days and we’ve had better good days than poor days so far this season.”

Malcolm Morien earned praise from the manager after returning to the side with three goals in two games. “Malky, yes I’m delighted! He was disappointed this time last week because he wasn’t in the team or the squad and I get that, but this week seven days later he’s played a full 90 minutes and 65 minutes in two games and he’s scored three goals in a week. So that’s how things can change in football. I’m delighted for him, he’s a great lad, great in the dressing room and he’ll look back at where he was this time last week and seven days later he’s played two games and scored three goals.”