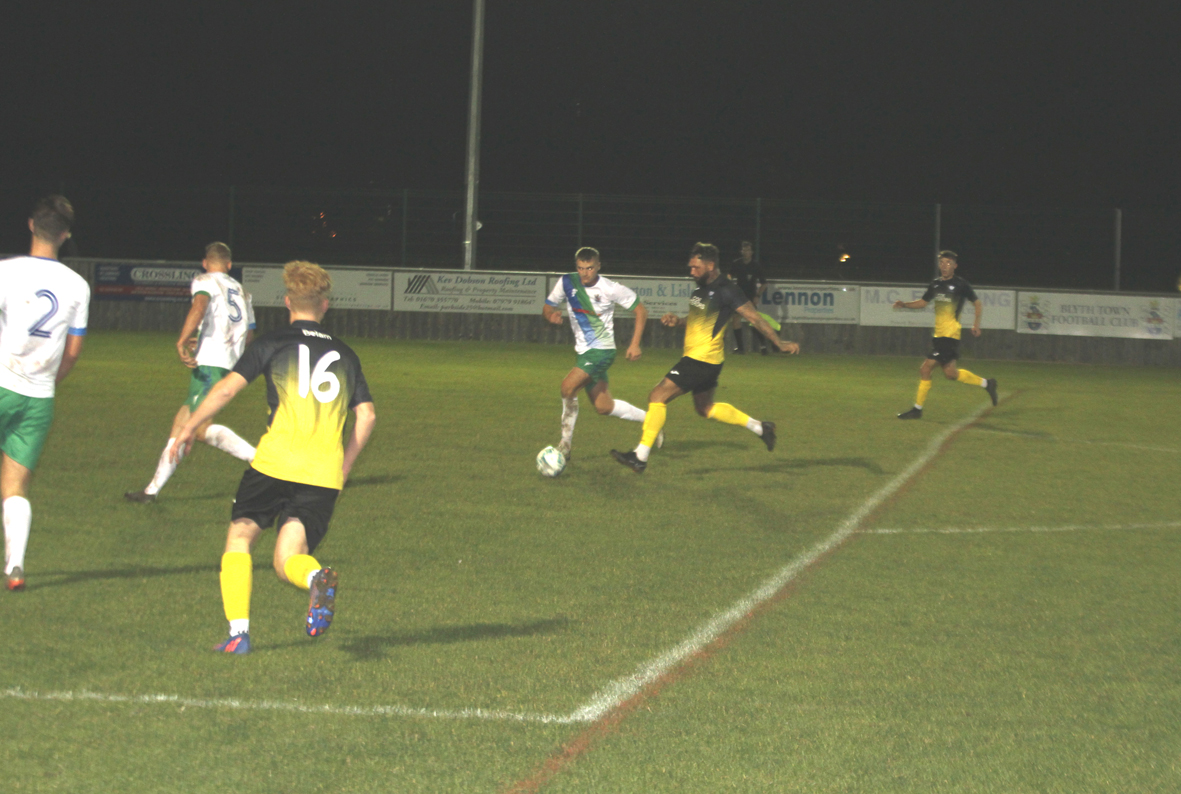 Whitley Bay manager Nick Gray was naturally very happy to see his side progress to the next round of the Techflow Marine Northumberland Senior Cup with a 3-0 victory at Blyth Town and said he felt every player worked hard for the team.

“Yes, I’m pleased! I thought we started quite well to be fair on a lively pitch. We played decent good football for half an hour. We got a goal in front, we were controlling the game and then credit to them I thought in the last 10-15 minutes of the half they came into it. I knew that second half they would come out at us as well. In fact I thought they started better than us second half. When its 1-0 the next goal changes the game and fortunately we got the next goal and it was a good finish by Sam Irons. I think a little bit more confidence came into our football after that but it was a contest for 70 minutes.”

It was Sam Irons’ first goal for the club, a fact that delighted his manager “Great that’s the 14th player to score a goal for us this year so I’ve got to be delighted with that. He was playing in an unaccustomed role today. To be fair there were one or two playing in an unaccustomed role today.  What these lads do no matter wherever they are on the pitch, they put their all in. Whether it’s their favourite position or their best position they’re doing their role for the team which is the most important thing.”

After the third goal Gray took the opportunity to bring on two of his younger players Shaun Dippenaar and Joe Groves-Forbes for the final 20 minutes. “Yes, they’re both youngsters. ‘Dipps’ has been away. Joe has been training with us. He’s got prospects, he’s good. I’m pleased because we’ve seen him training and he’s a good lad who’s new to this level and he’s getting some good valuable experience for the Reserves, but when he has played for us he hasn’t let us down.”

The side showed several changes from the team that beat Whickham 2-1 at the weekend but rather than focus on players who were missing, he emphasised “We’ve got a good squad here. You can’t win things with 11-12 players. You’ve got to have a squad and the lads who came in did terrific and that’s what we need. We could have felt sorry for ourselves by saying this person or that person is missing today but I’m only concerned about the players who are here, and they all put a shift in. They all worked hard and none of them let the club down today and that puts us in good stead going forward.

“We go to Tow Law on Saturday and that’s no easy place there. It was a tough pitch out there today and going up there will be a battle. They’ve had some great results this year, they’re having a good season so far have Tow Law but we’ve just got to keep doing what we’re doing well. We’re playing with a lot of confidence and whoever’s come in the team has put a shift in. We haven’t been the greatest the last couple of weeks football wise, but we’ve ground out results. It’s been a while since we’ve been beaten which is this sign of a good side. I think today at times we played some great football on a lively pitch.”

Talking about the long unbeaten run that goes back to early August, Gray added, “It’s a great achievement, 13 games unbeaten. At the minute, team talks are just about continuing doing what we’ve been doing, not giving up, helping each other, staying focussed, giving your all, when to play when not to play. Whoever’s come in has done a shift. It’s a joy to work with the players and it’s a pleasure being involved with them and they come in with smiles on their faces. With the strength in depth we’ve got in the squad, we weren’t moaning in the dressing room about who wasn’t there. I was confident in the lads and I think it showed out there. They’re confident in how they’re playing. It just shows the spirit in the whole squad.”