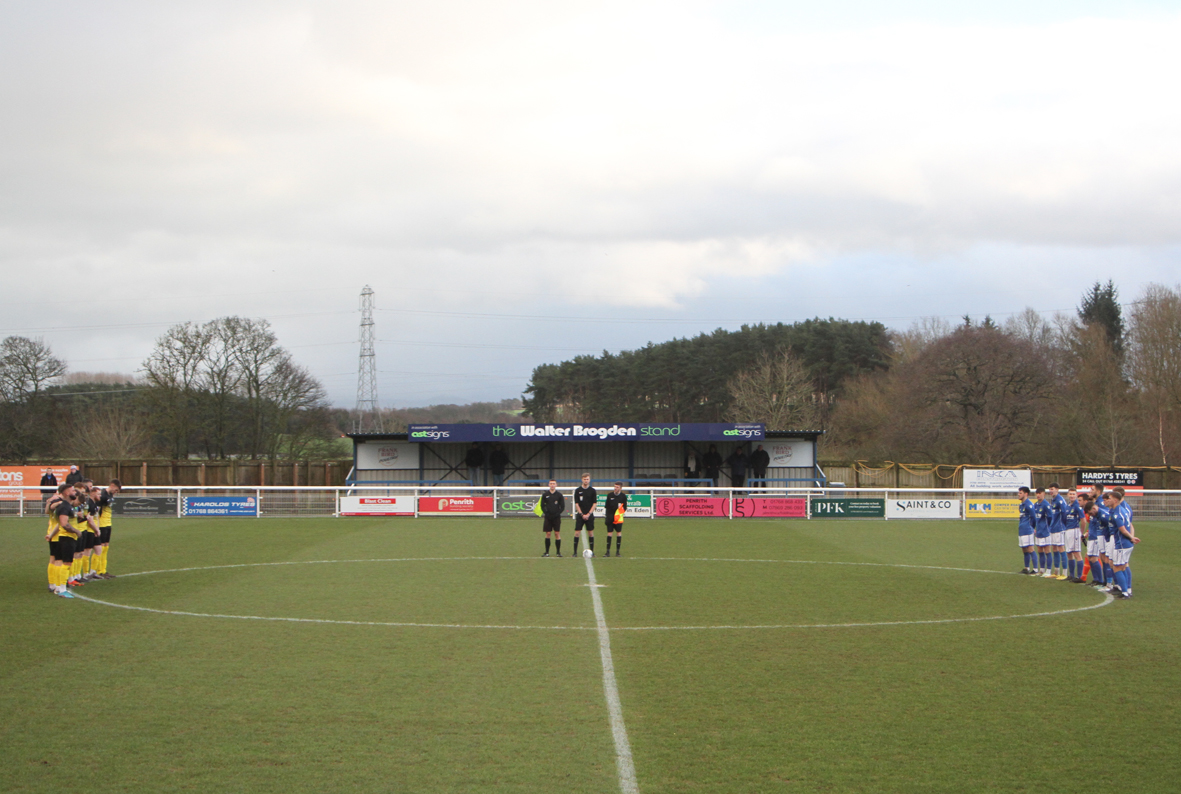 At the end of an emotional week for all connected with the Club, Bay manager Nick Gray said he was delighted with the performance of every member of his team after the 3-0 victory at Penrith and in a warm tribute, dedicated the win to Derek Breakwell.

“What a difference a week makes in football! I said to the lads before the game just work harder than the opposition. I thought the lads from minute one to the 90th minute were fantastic today. The subs when they came on played their part, it was a very satisfying result. Three great goals, and if we’re being greedy two more if they hadn’t hit the bar. If they’d gone in as well it would have been fantastic. I can’t remember Dan having a shot to save. I thought we defended really well. They had a couple of set pieces in the first half but they were half chances. I thought we were excellent across the park and it was a joy to watch today.”

Nick described the three goals. “The first one Malky’s flicked it on, Harvey’s gone down the line, done a great cross, Porritt’s headed it back, Malky’s caught it on his chest with his back to goal, turned and hit it on the half volley. The second, from a free kick, a great delivery by Ben Richardson, Scott has just got his foot on the end of it and sent it in the top corner, a great goal! I know Scott would say it was a fantastic delivery as well. And the third goal, we’ve won the ball and broke quickly, and made the right choice in the final third, which we’ve talked about. At 2-0 they were still in the game but at 3-0 it’s different. Harvey’s done a good square pass and Luke Porritt’s finished it well. And after that we’ve hit the bar twice." Penrith started the game in 18th place but Nick felt they were in a bit of a false position. “I’m not taking anything away from my lads today. They were outstanding from minute one and it was a pleasing day today.”

After last week’s defeat by Carlisle City there were some strong words said and the players seemed to have reacted positively. “We’re here to win games of football. We’re here to improve. We’re here to challenge. I’ve got to give my reasons for what I say to them. To get better you’ve sometimes got to take these things on board, some criticisms. This group are a great bunch, they’re learning all the time. At half time we gave some information which they took on board second half. The defending was better today. If I’m not telling them how I think it is, I’m not doing my job.  But yes, a great win today.

“We’ve had some injuries but the squad who’ve come today have been fantastic. The lads who came off had done nothing wrong; it was about freshening it up a little bit. We didn’t want to change anything at the back and kept the back four. In midfield Ben was just back after a bit of an injury so he came off and we put Harvey back there. Looking right through the side there were some great performances."

Adam Patterson made his full debut after a series of substitute appearances and his performance pleased the manager. “Adam’s got his chance because someone’s injured and I thought he did take his chance well. He was keen to win everything, I’m delighted for him. He put in some tough tackles to win the ball.

“It’s tough making decisions when you’ve lost a game, do you ring the changes or do you go to those lads who’ve done well?  It’s hard on the likes of Josh and Jackson and Joe and Adam because they’ve not been getting many minutes but they’ve just got to be patient. The attitude today was great and I was delighted.”

It has been a very difficult week for everyone at Whitley Bay Football Club and ahead of the game there was a minute’s applause in memory of Derek Breakwell. Nick paid a warm tribute to the man who served as Club Secretary for almost 30 years and was a hugely popular and well respected figure throughout north east non league football.

“I’ve got to say from a personal point and from all the staff and all the players our thoughts are with Derek’s family, with Jennifer and all the family. It’s a tough week for the club. I know what it’s like for them, but that win was for him. Derek’s work for this club has been fantastic. Our thoughts today were massively with Jennifer and the family. He was involved in so much over the years including all those Vase wins. We were delighted to get that result for Derek today. We speak about this great guy who was fantastic for this club. There are not many people in football who never have a bad work spoken about them. But everyone had a good word for him, he helped other people, he was always helpful. He helped me at Morpeth when we got to Wembley. And that’s what it is about with Derek, he has helped numerous people. The sad thing is most people don’t realise that, they don’t notice these things. Derek has helped everyone. He was well appreciated but sometimes we should show more appreciation of people when we can before they’ve gone.”