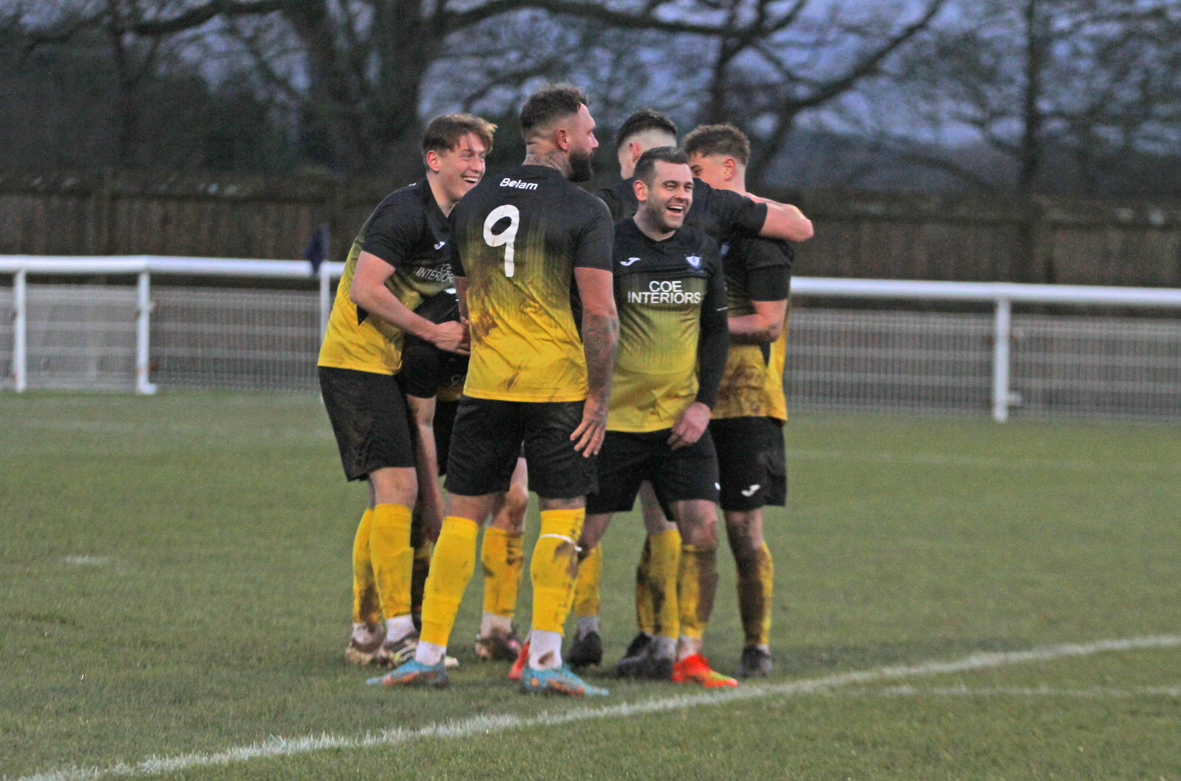 An excellent performance by every member of the side lifted the spirits of Bay fans and officials after a very sad week for all associated with the club.

Without a doubt this was a display and result that would have delighted long serving secretary Derek Breakwell who sadly passed away seven days earlier and for whom there was an emotional one minute’s applause before kick off.

The hosts had worked hard to ensure that the pitch was playable after a week of heavy rain and it was the elements rather than the playing surface that caused problems for players and spectators, with heavy showers and a strong and bitterly cold wind throughout the first half.

Whitley had to contend with several absentees through injury but it gave the opportunity for Adam Patterson to make his first start after nine appearances from the substitutes’ bench and he certainly grasped his chance with an impressive display.

Beginning strongly, Whitley largely dominated the opening stages and they took the lead after just six minutes. Malcolm Morien started the attack by playing the ball out wide to Harvey Neary who advanced down the right wing before crossing it deep into the box. Luke Porritt headed the ball back for Morien to control and place into the bottom corner leaving keeper Arran Taylor rooted to the spot. It was the perfect start and though Penrith began to settle into the game they posed little danger to the Bay defence. Porritt almost added a second goal in the 19th minute when he cut in from the left and drilled a strong shot narrowly wide of the near post and into the side netting.

Keeping up the pressure, just two minutes later Whitley won a free kick some 25 yards out on the right. Ben Richardson, back in the side after missing last week’s game through injury, delivered the perfect ball into the near side of the box where Scott Lowery flicked it past Taylor high into the net to double the lead.

Shortly before the half hour Dan Lister was called into action for his only real save of the game but another attack by the Cumbrians seven minutes later was thwarted by an excellent block from Elliott Day.

Whitley were comfortably in command and only a bad challenge by Murray-Jones stopped Cameron Brewis from breaking through, with the Penrith man cautioned for the offence.

Leading by two goals at the interval, Nick Gray’s men came out for the second half with conditions steadily improving as the rain cleared.

The pattern of the game continued with Penrith struggling to break through a solid and well disciplined Bay defence. Early in the half, Day made another important clearance when it looked as if the hosts might force their way back into the game but they could not sustain any pressure and Whitley responded with Morien getting in a shot that was deflected behind for a corner.

Whitley were looking for a third goal to make the game safe and it duly came in the 63rd minute following a quick break from midfield. Neary, a constant threat stretching the home defence down the wings, played the ball square to the edge of the box where Luke Porritt drove a great shot beyond Taylor.

Whitley were in complete control now and within two minutes so nearly made it 4-0 but Morien’s shot cleared Taylor but hit the bar. Another chance quickly came but Porritt was tripped as he was through on goal with defender Luke Brown perhaps fortunate to receive only a yellow card.

Three minutes later, a great attacking move set Neary through on goal but once again the woodwork came to Penrith’s rescue as his shot crashed off the bar with Taylor beaten.

Into the final 15 minutes, Whitley used three of their substitutes with the fresh legs of Josh Gilchrist, Jackson Ward and Joe Groves-Forbes all putting pressure on a tiring home defence. Gilchrist almost got a fourth late on, forcing a good save from Taylor before the final whistle brought enthusiastic applause from the sizeable contingent of Bay fans who had made the long trip to Cumbria.